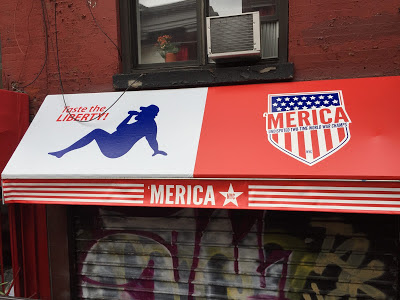 As you may have heard, there's a restaurant opening at 320 E. Sixth St. between First Avenue and Second Avenue called 'Merica.

And tomorrow (Saturday!) is the soft opening day for what has been described as a "tongue-in-cheek eatery" featuring décor that includes rifles, NASCAR memorabilia and non-stop episodes of the Chuck Norris vehicle "Walker, Texas Ranger."

The co-founders are Radoune Eljaouhari, who ran Zerza, the previous restaurant in this space ... and Zach Neil, who operates the Tim Burton-themed Beetle House a few doors away as well as Stay Classy, the bar for Will Ferrell fans on Rivington Street.

Here's part of a preview via DNAinfo:

'Merica ... seeks to transport its diners to the "real America" — or at least a humorous, tongue-in-cheek homage to the idea, decked out with race cars and guns, inspired in part by ... Neil's childhood.

"I spent a good portion of my childhood around the backwood, hillbilly southern Republicans, then I moved to Pennsylvania and grew up next to a NASCAR race track," said Neil.

"Imagine the Donald Trump campaign coming to your backyard every weekend."

And here's a look at the menu via the 'Merica Facebook page... 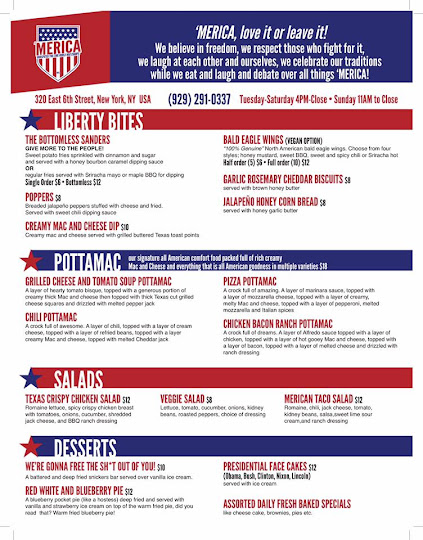 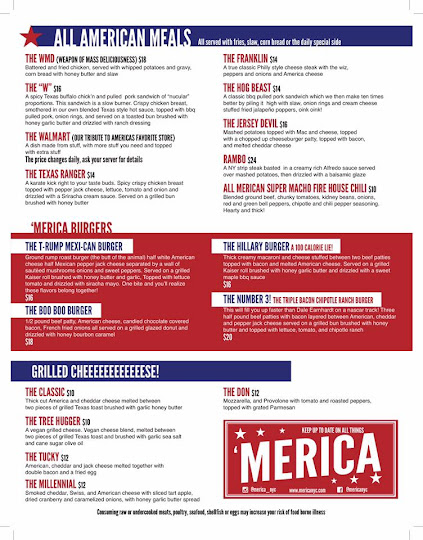 As you will see, there isn't any Kanye West-inspired food. An earlier Facebook post noted an item called The Kanye, described as "fried breast of chicken tossed in a creamy rich Alfredo sauce served over mashed potatoes, then drizzled with a balsamic glaze. This meal will make you into a famous rapper and a narcissistic asshole. Ask the public to loan you the money for it. $18."

Neil told Patch.com that "The Kanye" wasn’t really going to be on the menu, that it was just posted on Facebook for "shock value." (That post was later removed.)

Gothamist summed up the whole operation this way:

It's basically this Simpsons clip of the time they went to Japan's Americatown, but somehow real life ...

Email ThisBlogThis!Share to TwitterShare to FacebookShare to Pinterest
Labels: 'MericaNYC

Why THE FUCK would anyone want to imagine a Donald Trump campaign in our neighborhood?! The rise of Donald Trump isn't funny anymore should you have missed the memo.

But why stop there? Why not open an ISIS themed restaurant and drown people on the hour?

Or maybe a Jerry Sandusky playground in TSP?

Do you bros have ANY idea how tone deaf you are? This "joke" is falling flat big time.

Please go back to wherever the fuck you came from and home cook your "irony" there.

I would much rather see a Cereal Killer café in this space. I am serious about that, and I think it would bring in tourist dollars while filling an important void.

Considering that the one in London is devoted mainly to promoting United States cereal, though, we'd probably get stuff like Weetabix and Marmite on toast.

I can't get too upset about the concept. He's right, it is a FREE country. I hope they keep all the hysterics inside the restaurant.

I plan to VOMIT there regularly.

I like a joke as much as the next guy and I believe satire especially of the political variety to not only great but and absolute must in a free society. Having said that, poking fun of rural people's "hunters" guns, the appeal of NASCAR for a population that probably does not have anything like Lincoln Center within a 500 mile radius is just classism and disrespectful to fellow Americans. Imagine going to western PA and dining at a diner called "The Privileged Bubble". It's a theme restaurants where wait staff walk around in yoga pants and have iPhone always with earbuds so they can't hear you. Client's complain about allergies and everything on the menu is glutton free and "made in Williamsburg". When the check comes only gold Amex cards are accepted and tips go directly to the owners.

This will make the East Village Great Again. Bigly.

Yeesh, am I the only one who thinks this sounds fun? And I hate all the "Murica" sentiment normally!

Entire political campaigns are run (and won) on the idea that New Yorkers are not "Real Americans." I agree that it is bad form (and playing to type) to make fun of people in more rural areas, but we shouldn't do it because it is mean and spiteful, not because those people deserve better.

Ponderous and oppressively unfunny. Oppressive because the neighborhood has to live with the inanity every day, walk past it, roll their eyes, every day. Dollars to donuts it won't be long before the owners themselves grow tired of their own tepid schtick. Jokes tend to be of the moment and have short shelf lives and that's generally why successful proprietors tend to not build entire businesses around such things.

How could anyone not be repelled by a restaurant in which you are expected to engage in debate with the other patrons. Yikes.

It's a poorly executed idea. If they didn't try and politicize it - and were actually funny - this concept would work. They forget a majority of this neighborhood moved here to get away from the demographic they're parodying. Again, it could work, but there's a reason these guys aren't making a living as comedians.

No one is going to go to a clownish theme bar-restaurant and discuss important issues facing our country and world like Zach thinks. Like the bros this place is gunning for will be discussing climate change. Just be a sports bar and be done with it. So what is wrong with Eli Manning's accuracy of late?

Another thanks to 8:49 ... good to see more readers chiming in and sounding off against the near constant negativity that dominates the comments of EV's posts.

Trump's son-in-law bought buildings in the EV..heard he is not the nicest owner either..

This is Zach's pro-Trump venture he disguises as "satire."

Go back to rural PA dipshit.

Can we boycott red states? I mean none of them make clothes or obviously build housing, so that's two of the three basic human needs we don't need to patronize them for right there.

What about food? Do most meats, vegetables, and fruits come from the Maine to Virginia (blue state) corridor?

I almost feel bad for him because he doesn't realize how weak it is to take talented people's work and turn it into shitty theme bars and restaurants. Did Tim Burton sue Zach (of course his name is Zach) for Beetle House yet?

I love the menus you post Grieve. I can make these things at home if I choose to, without going there!!!

For all the time they have spent on the concept and promoting, that isn't going to matter one bit if the food isn't good. Look at that Empire Biscuit place. The owners spent all their time on a concept and marketing and didn't come through with good food. People might visit a place once to check out a big concept but they aren't going to return and become regulars if the food is crappy.

Believe me, this would not be my first choice. That I can tell you.

It is a far stretch to compare Empire Biscuit to this place, I liked the biscuits and it had a calm vibe unlike what I expect here.

Why oh why are we enabling these creatures by continuing to comment on them? I can't wait to read on EV Grieve that they have closed after X # of months because there was nobody around who wanted to try this shadowy excuse for a restaurant.

That was not a Freudian slip but a satirical comment on how popular it is to have "issues" with glutton regardless if you actually have cause to. Glutton aversion on a mass scale is popular because it makes eating more complicated and therefore entitles those who claim they can't eat it more attention, empathy and power.

We went there tonight hoping that it would be fun puns and some greasy yet tasty grub. The first thing we tried was basically tasteless. By that I mean it had no taste. The decor was tasteless in the sense you'd expect. The second thing we tried was a pot-o-mac (see what they did there?). It arrived, after a very long time, and was was nearly not cooked at all. One poke of the solid block of cream cheese was all we needed to send it back. The manager asked for feedback and offered to get us anything else on the menu, but by that point we were laughing uncontrollably and couldn't give feedback without being mocking. So we left.

Luckily for us, Itzakaya had an open table, so we sat there and ate delicious food and tried to process what just happened.

I think the best summary is a line from one of the Jackass movies: "What did you think was going to happen?"

I will only go if they have a mechanical bull there. No bull, no me.

Heck I havnt been in the ev for years, and moved to the country a few years ago after being born in Queens and living in SI.. and FIDI,,, but damn can't they throw a coat of paint on that gawd awful security gate? Fancy awning and stupid menus and the place looks like crap.

*where he grew up was like the trump campaign coming to his backyard.

This is so fucking corny.

I hope someone throws a party every night outside Zach's house until 2 in the morning. Because that's what it's already like with the idiot tourist trap Beetle House.

First Hilarious Yelp Review: Mike C. From Forest Hills gives it 2 stars. Looks like the Pizza Potomac is dead in the water:

"Easily the worst food I've had in a very long time.

The only good thing about this place is that it was so dead and the music was pretty loud, so the two kids could roam around freely without having to worry about them disturbing anybody.

I get that it's a silly gimmicky type restaurant, but still, the food was borderline inedible.

I'm still getting over the shock of paying $18 for the gross Pizza Pottamac, but maybe I'll update the review with more details later after I eat some real food."

Zach,
Please stop making new restaurants. You are polluting the east village with tourist magnet trashy theme bars. We do not appreciate your type of business and wish you would go away.