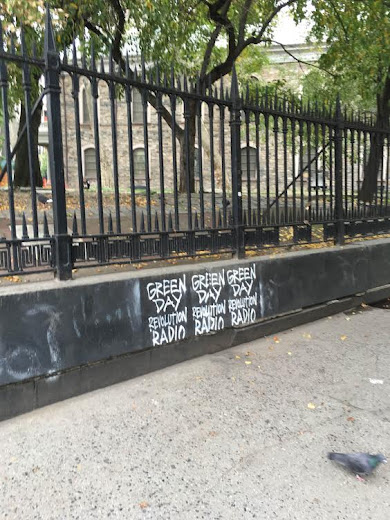 For some closure on the Green Day Stencil Promo on Historical Church Fence story... the ad was wiped off/painted over yesterday... not sure who did the work (a church employee? Green Day Idiot Team Nation member? Bille Joe Armstrong?)... 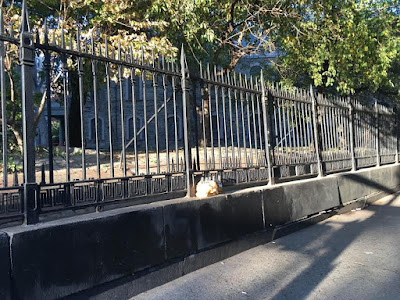 As previously noted, several readers sent emails to the Green Day Idiot Team Nation last week after the ad for the band's 12th album showed up along the fence outside St. Mark's Church in-the-Bowery ... and someone there responded:

Thank you for bringing this to our attention, it is being removed immediately.
Thank You,
Green Day - Idiot Nation Team

It took five days, but it was removed here on 11th Street and Second Avenue. Coincidentally (or not!), there is an empty six-pack of Corona at the exact spot where the ads were...
Posted by Grieve at 9:39 AM

Fuck them for stenciling it.

Fuck them for not apologizing.

Fuck them for removing it only when they were alerted of it.

Fuck a band with three guys who have multi-million dollar net worths having "street teams" (free labor suckers who work for free.)

I'm very happy that the stencil has been removed. But the fact remains that somewhere, somehow, someone thought that it was a really great idea to vandalize an eighteenth-century church in order to sell something.

When an organization hires idiots that can't recognize an historic church and graveyard from the side wall of a Verizon building what can we expect. They should have removed the paint instead of just covering it up. We still don't know if Green Day had anything to do with the paint coverup or if the church or a good citizen took it upon themselves.

Those guys are a bit old to play punk. Well a homogenized and processed version of it.

"Good Riddance" is punk's "you light up my life".

I Tweeted it to them. Glad they had it removed. Can't blame them as it was someone on their PR team; not like the band knows or did it maliciously.

What is wrong with all of you curmudgeons? First, "street team" doesn't mean what it used to. You don't know that these people aren't making decent money. Second, Citi Bikes and rig are attached to historic cemetery and this writing that was a bad idea and that's been removed is the problem? Green Day are still incredible by the way. even if a lot of jealous people need to dig at them...

Did they open up for Von Elmo at one time

How is Citibike "attached" to the church? They're in the street, not even on church property. This make zero sense.

Shawn - The band knew, so stop sounding like a Trump supporter who says "Donald didn't know..." They must've been shown the stencils and they should've said "Yo they did that on a church wall, remove that shit." I took one look at those stencils and was like yo that's fucked up. Also their management company and publicity firms must've briefed them on what was to be done. It's common sense that you don't fuck with stone walls as more often than not it's part of a historic place.