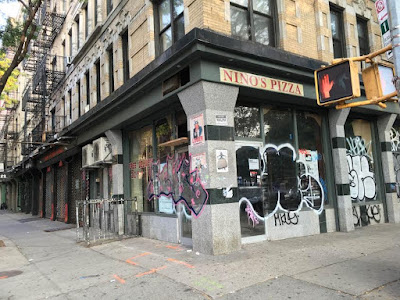 In recent weeks the former Nino's Pizza storefront on Avenue A and St. Mark's Place has been blanketed in graffiti... making it difficult to see what might be going on inside the vacant space. (Not to mention the brown paper.)

The other day a worker wiped away part of the tags, offering a view of the interior... 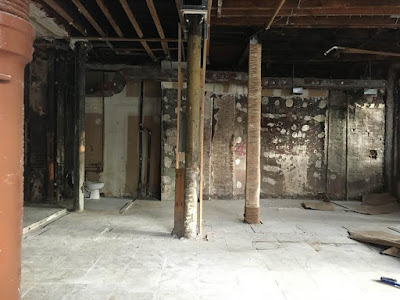 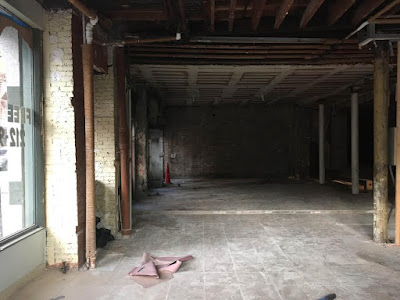 [From A looking to the west]

The wall separating the former Hop Devil Grill at 129 St. Mark's Place has been removed, creating one big(ger) space... 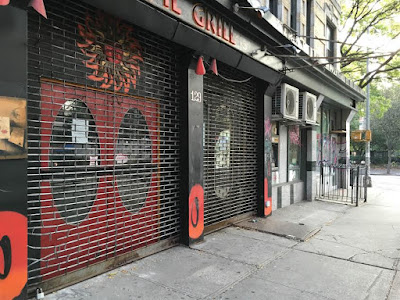 There are work permits, dated Oct. 14, on file with the DOB for "interior demo."

No word if there's a tenant for the space or if the landlord is just giving it the vanilla box treatment to show potential tenants.

James Morrissey, who owns The Late Late on East Houston and now VNYL on Third Avenue, had been after the spaces to create The Honey Fitz. Those plans were put on hold, though Morrissey told DNAinfo back in February the he "remains interested in the location, assuming all outstanding lease issues have been resolved."

A for rent sign (which arrived back in April) is barely visible now at the Nino's space... 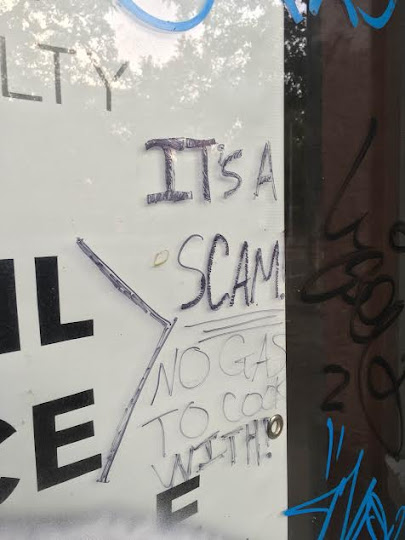 Nino's closed in October 2015. As previously reported, owner Nino Camaj accepted a low six-figure amount to walk away from his remaining 10-year lease and surrender the pizza shop that he opened in 1989. He had been in a dispute with the landlord over back rent and a closure due to a gas leak in the building.

Hop Devil Grill and its sister bar next door, The Belgian Room, were seized by the state in April 2015 for nonpayment of taxes.
Posted by Grieve at 4:18 AM

There is a dark cloud sitting on the corner of St Marks and Ave A, nothing good will come of this.

I think this space will become a Starbucks. I have this feeling it will happen. The closest one is on First Ave, which is quite small. As we all know, they are ubiquitous in nature. I could be mistaken, but I am going to call it what it is. Now seems to be the time. Look what has transpired on Ave A in the past five years. A Starbucks is a fundamental step in achieving homogeny.

I can't believe I am about to say this but a Starbucks would be preferred over loud theme or sport's bar. There are 2 SB's on 1st one at 13th the other near 3rd I believe. Certainly no small business could afford this space so goodbye to retail and service diversity and hello to more corporate storefronts.

I live in the building above it. Last week I spoke to a worker fixing electricity in the building who told me they are upgrading the electrical system because a STARBUCKS is going in. Out I go.

Can someone PLEASE make it into a live music venue/bar/restaurant/cafe?

Put up or shut up, Chloe "The East Village Is Dead" Sevigny. You have money and investor friends.

Anon 12:18 - they always say that. Usually BS. Or your comment could be BS. But who knows.

I'd say too that a Starbucks would be a great addition to the area. Sorry. Don't want to piss anyone off. But I can't take another stupid bro bar with their patrons screaming and barfing into the wee hours of the night. The EV isn't supposed to be Chapel Hill or the University of Arizona. Especially alphabet city, where many of the venues have this frat boy vibe. I'll take a Starbucks over that shit any day.

My idea is totally freeform. Any and every talent and form of expression including non-music and non-words. You live in the neighborhood and have something to share, you share it. Everyone.

Don't you guys realize that a Starbucks would cater to the very same crowd you complain about in "bro bars" or whatever? It'll be there for the caffeine jolt they need to keep partying into the night.

By the way, good luck with that music venue. Within two weeks this blog will be blanketed in comments about how "it's too noisy for this residential neighborhood."

That's good insult the residents. It's not the noise of cars, sirens, whatever. We like that. It's the shit mob of idiots forced on us. Landlord harassment and the proliferation of bars and restaurants can help landlords get their money and clear out seniors and other rent stabilized shut-ins at the same time.
Artists and poets do side with the landlords/developers. They are really into exploitation, have no apologies, hide and erase incriminating information,spread rumors, brainwashed submissive ass kissers.
This block is good. It's a string of wide open bars that spill out onto the street attracting various types of assholes. I think that we need to shut them down.
I like the creperie, tea, book store, sock shop and some others on the block.
What would be nice on this block is a record/cd store.
Jonis Realty owns like half the block. Residents have no gas.Wonder how long they will last.

Here you are again, the guy/gal who rails on and on and on about how artists and poets are in cahoots with the landlords and developers. Just stop embarrassing yourself.

First off, artists and poets don't mean shit to East Village landlords and developers in 2016 because the vast majority of the people who rent and buy from them don't give a fuck about or want artists/art or poets/poetry.

Second you're living in the late '80s to mid '90s when landlords and developers in East Village and other gentrified neighborhoods touted artists, poets, musicians etc. as draws for the neighborhood because those people actually existed in the EV. They are few and far between nowadays and have been since I'll say 2000.

No one moves to the EV for art and poetry in 2016, sorry. But keep hating on creative people some more. I relish getting into it with you again.

Last the more creativity the better.

In my dreams, this would be a bookstore with readings and music/film nights. Sigh.

@3:48pm Yes I am what's it to you? Are you the person talking shit on East Village artists and poets about how they intentionally bring landlords and developers to the EV when they don't? The same person who ran his mouth about them in a post about the Hop Devil Space earlier this year? Cuz if you are, we can argue as long as you can pal. Talk shit about people, get called out.

I still just really miss Nino's slices and chicken parm sandwiches. The walk up window was perfect for being able to pick up food while walking my pup. I wish he'd open up shop again somewhere nearby.

The guys who wanted open the honey Fitz and the landlord bought him out for 100k. That's a fact.

So what and what's your point that the Honey Fitz guys bought out Nino's? Good for the Nino's owner who doesn't owe anyone anything. He never publicly railed against the tide of shark landlords wanting max rent, he sold pizza, nothing more or less.

As a former renter of spaces rented by this landlord, All I can say is woe to the sucker who rents from them. They are uber evil and will steal all of your money, charge you for their building problems, and hit you with all kinds of fees. Good luck Starbucks. Feel the pain. East Village of yore is now done.