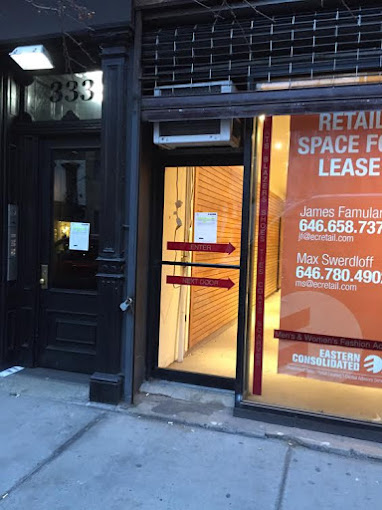 ConEd has placed turn-off notices on the front doors at 329-335 E. Ninth St., the buildings operated by the Jared Kushner-owned Kushner Companies here between First Avenue and Second Avenue. 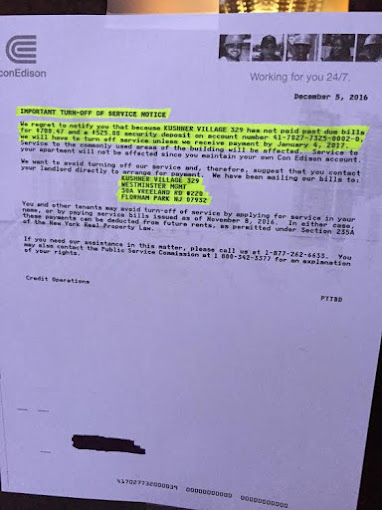 As previously noted, only Steve Croman owns more residential buildings in the East Village than Jared Kushner does. Kushner, 35, who is married to President-elect Donald Trump’s elder daughter, Ivanka, reportedly may have some kind of role in the new administration.

DNAinfo has more on the story here ... including:

A representative of Westminster Management said the company was in the midst of transitioning the management of utility payments to a different company, likely causing a delay in payments, and added that the bill had been paid on Monday.

Perhaps he is renegotiating his deal with Con Ed?

These people are on top of the world right now. They likely think they have the Midas touch. They are extremely proud of themselves and if what the ages say about pride is remotely true, these people have it coming to them. Big time, historic proportions. Consequences--nobody escapes them.

The Donald just tweeted up a storm denouncing Con Ed. Then appointed Kushner eminence gris or was it greed, no maybe grotesque, ok it's dangerous... in his cabinet!

The way things are going, and I say this with all sincerity, he'll probably end up as Treasury Secretary. I can just hear the Vermin-Elect: "you know, his people are great with money!"

Just chip a little piece off of that gold throne you like to sit on, and pay the bill with that

Who hasn't not paid their Con Ed bill? I get shut-off notices once or twice per year for late payments.

Only little people pay their bills.

Is this any way to run a Kleptocracy?

Is anyone really surprised by this? Just look at Kushner's face and you can see what a self-satisfied slick operator he thinks he is. But yeah, consequences apply to everyone ultimately, so I'm sure karma will even things out with Kushner eventually.

No one knows the facts so you shouldn't be speaking on it. That's why there's so many problems in our society.

@6:59am: "No one knows the facts" - yeah, we do: Kushner-owned buildings are behind on their Con Ed bills, so much so that Con Ed is going to turn off service. What more "facts" are you looking for? Did you also vote for Trump??

if this crap continues, create a Kushner Tenant's Alliance. Croman Trnant's Aliance helped get Steve Croman in trouble with his sleazebag antics.

This makes sense since Kushner's tenants don't get heat. Read his reviews on yelp.com under Westminster Management in new york.