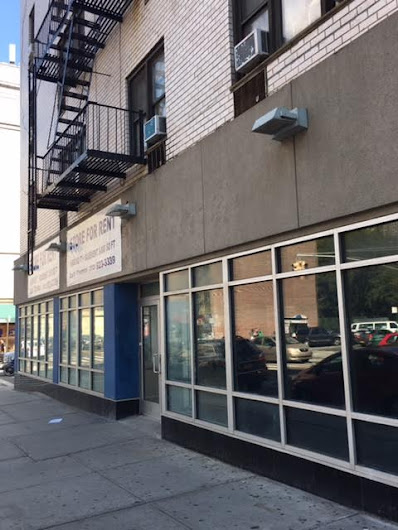 The corner space at 20 Avenue A and Second Street has sat empty since the Chase branch closed in November 2015.

And after at least five brokers showed the space, it looks there's potential new tenant. According to CB3's SLA agenda for Oct. 16, Eastville Comedy Club, currently housed on Fourth Street between Second Avenue and the Bowery, is proposing to move into some part of 20 Avenue A. (This is a pretty large space, and the various listings said that it could be divided.)

The full questionnaire for this application isn't online just yet. Will update when that is available.

This CB3-SLA meeting is scheduled for Oct. 16 at the Public Hotel, 17th Floor, Sophia Room, 215 Chrystie St. between Houston and Stanton. The drama starts at 6:30 p.m. (The SLA committee meeting agenda is split up over two nights. The second meeting is Oct. 23 at 6:30 p.m. in the Perseverance House Community Room, 535 E. Fifth St. between Avenue A and Avenue B.)

The retail space at 20 Avenue A no longer looks like a bank branch
Posted by Grieve at 4:30 AM

Email ThisBlogThis!Share to TwitterShare to FacebookShare to Pinterest
Labels: 20 Avenue A, Eastville ComedyClub

Even before I looked at the yelp reviews for this place my brain was screaming NO!!! And it is still screaming. The amount of people who descend on the area on the weekends is bad enough. We do not need people coming to Avenue A seven nights a week for comedy shows. No. Just no!

I do share your sentiment in wanting to protect the nabe's precious Sunday night through Thursday peace time (before the weekend revelry hits). But comedy goers are much better behaved than binge drink clomp around 20 something crowd. Opposed to being retail blight or a bank or chain this is a positive, and good standup and giving opportunity to comics is a part of new york.

606---then why do comedy club patrons at UCB 1 block away get shitfaced drunk in the UCB bar after shows and end up outside screaming OMG I have never been so drunk--and vomiting. Do we need to add to traffic/taxis/honking? this is a residential neighborhood--not an entertainment district.

"Opposed to being retail blight or a bank or chain this is a positive, and good standup and giving opportunity to comics is a part of new york."

Are you kidding me? No way in our godforsaken hell of a neighborhood is this a good thing or better than ANY retail. Give me a quiet (at 2am on most any night) bank over this any day! Sheesh.

OMG you guys do you remember all the dramz when UCB moved in and everyone thought their "Hot Chicks Room" signage was stupid and/or corny and/or offensive esp for a street-facing sign, and then all these UCB superfans started "Well, actually ..."-ing at us, like "It happens to be the name of a classic UCB sketch, obviously, and is in no way offensive," and everyone was like "Yeah man this is a classic sketch to about three whole people, all of whom are commenting here right now." Good times. Seriously, life was so much more innocent then.

Eastville is for tourists with money. Its $20 to get in with a 2 drink minimum and those drinks are $10 or more. They hustle you to collect the money right in the middle of the headlining act too. Its awkward and I know many stand ups dont like performing there for this reason.
It's a packed crowd mainly from NJ and CT and though I doubt these people will be woo hooiing in the street after they are asked to leave immediately after the show I cant help but wish they change owners and loosen up. Everyone who works there never smiles and the vibe is just bad. UCb may benefit from how bad Eastville is when people see UCB has free shows and ones that are $5 with many of the same acts.
I was sad when I saw how bad eastville is as they book many great folks and its so close to me...until I went there and had some of the worst experiences at a comedy club one can have. It needs to move to midtown really.

I don't know anything about EastVille's business. I am opposed to this, or any, bar opening in a space that was NOT previously licensed to sell alcohol, especially on a block with 7 liquor licenses between 2nd and Houston St. This is a saturated zone. Enough already.

I don't get why people go to comedy clubs in NYC at all when you can see a comedy show on the street every night.