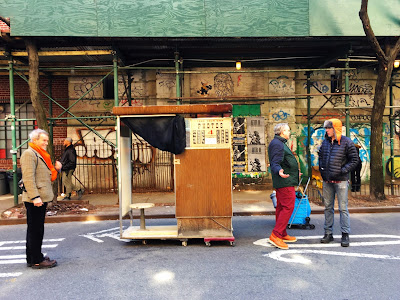 [On the way to Avenue C]

Early last month, Trixie told me about her vintage photobooth that needed a new home.

It had resided inside HiFi these past five-plus years. She thought that the bar taking over for HiFi on Avenue A would keep it. Unfortunately, the proprietors of Coney Island Baby weren't able to accommodate the photobooth.

This morning, Trixie, a longtime East Village resident, reports that she finally found a taker for the Autophoto Model 14 photobooth, which started its career at Nunley's Carousel and Amusement Park in Baldwin, Long Island, in the 1960s.

"We talked to a lot of people, so many people, and had some very interesting leads, but in the end we were able to keep it in the East Village," she said.

The photobooth has made the blocks-long journey to Bedlam, a bar that opened in 2010 on 40 Avenue C between Third Street and Fourth Streets.

I'm only vaguely familiar with Bedlam.

"It’s a neat place with a lush Victorian feel. Lots of wonderful taxidermy and anatomical specimens. It’s beautifully appointed," Trixie said. "The photobooth is there now, set up and ready for action.

"I think that Bedlam will be a good fit and make a happy home for our dear old photobooth."

The booth was previously at the Lakeside Lounge, which closed in April 2012, on Avenue B.

Previously on EV Grieve:
Lakeside's photobooth has a new home
Posted by Grieve at 10:00 AM

Yooooooooooo!!! I grew up in Baldwin!! Moved to the city in ‘93. Been following that photo booth for years and years. Have tons of strips of photos of me, family, friends from that very machine. Saw your picture of it teeny tiny on my iPhone and knew right away which machine it was. Thanks so much for this update! Feels good to know where it is now (and that it’s still out there doin’ its thing!) This is a very special site you maintain here. ❤️

Nunleys! Aka as Jolly Rogers. I remember that photo booth! I grew up out there and spent many happy hours of my childhood @Nunleys, riding the beautiful carousel (grabbing the gold ring got you a free ride!) and playing Skee-Ball. And eating hot dogs. Man, those were the days..

This is a bridge and tunnel, not local crowd. Not my speed.