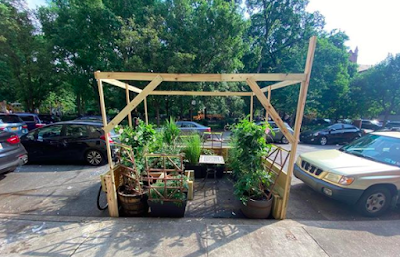 We've heard from several frustrated restaurant owners in the neighborhood who abruptly had to change their curbside dining setups at the request of the city — despite following the city's instructions to the letter.

Pete Wells at the Times reported on the mixed messages courtesy of the city back on July 2.

Under an emergency program launched on June 22 to aid the ailing restaurant industry, some 6,800 establishments citywide were authorized to serve food and drinks on sidewalks and curbside spaces.

Inspections have continued this past week, and places such as Il Posto Accanto on Second Street have had to tear apart their solid and previously OK'd curbside dining arrangement – within 24 hours or risk losing their outdoor dining permit.

C&B Cafe on Seventh Street between Avenue A and Avenue B posted about their experiences on Instagram yesterday:

This is how the story goes. Three different city/state officials came the last four days to give us different information about how we should practice the outdoor dining. Also we have four different emails from DOT about the guidelines suggesting different ways of building the spaces.

As you can imagine it is time-consuming and expensive to constantly change/build based on new information we get. Since the city is not covering all those expenses and labor we decided to keep the outdoor space as [owner Ali Sahin's] garden. He is going to try and keep these wonderful plants alive for the rest of the summer and hopefully find a permanent home for them once this thing is over.

Sahin decided against fighting the bureaucracy any further as C&B is primarily a takeout space to begin with.

Previously on EV Grieve:
• A second look at Phase II dining in the East Village
Posted by Grieve at 6:20 AM

Did you finish those TPS Reports yet?

I'm gonna need you to go ahead come in tomorrow. So if you could be here around 9 that would be great.

What is the deal with Il Posto? I was wondering why they had the construction barriers instead of the nice wood plus plants like most other places. Supper down the block looks great!

What is needed is social distancing. If you can't follow that one simple guideline then you don't need any more input from the city, you need to go out and see if someone will sell you a brain.

It sucks that it happens to calm places like this, when places like Yuca Bar are a nightmare of noise and crowds and overserving.

Ah, competing & conflicting city demands on business owners - a hallmark of the de Blasio shit-show that is his mayoralty.

This administration has got to be one of the very worst that NYC has experienced in a very long time.

Its more important that DiBlasio be out painting corporate slogans on 5th Ave (FACT: BLM is a registered corporation) with our tax dollars than helping the taxpaying citizens and businesses.

@2:45pm: MOST functioning governments are able to multi-task.

@245 All nonprofit 501c3s are incorporated... corporations