Checking in on Foxface Al Fresco on St. Mark's Place 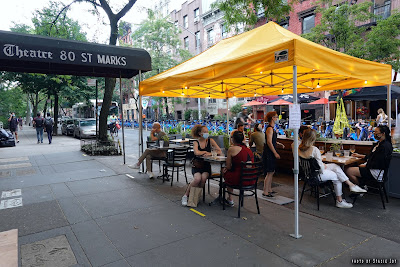 During the COVID-19 crisis, Ori Kushnir and Sivan Lahat, the owners of Foxface, have continued to be creative with their the shop inside the William Barnacle Tavern at Theater 80 on St. Mark's Place just west of First Avenue. 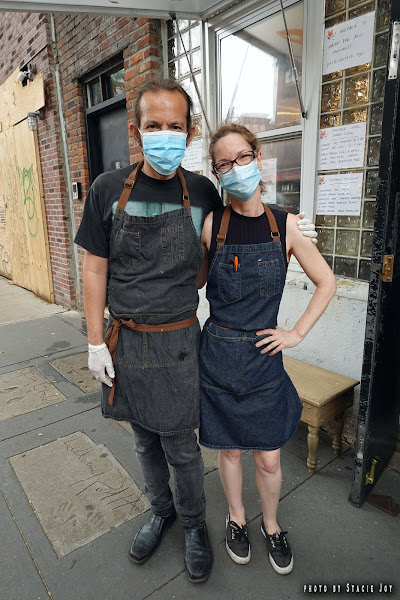 Back in the spring, the East Village residents introduced several new offerings, including Provisions, a pantry of sorts, and the Foxface Farm Stand, where you can order farm-fresh items such as eggs, dairy, meats and honey. In addition, there's the Bread Stand, where fresh baked bread is available.

Now they've unveiled Foxface Al Fresco, a curbside dining option with a summer seafood menu, including local oysters and lobster from Maine. Lorcan Otway, Theater 80's owner and the proprietor of the William Barnacle Tavern, is offering a selection of wines and cocktails. 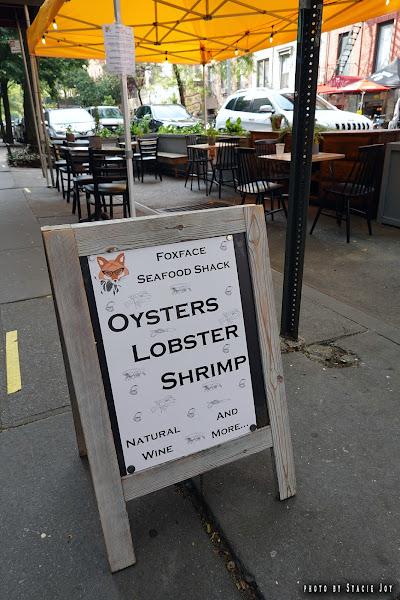 Ori told me that he had carefully set up the restaurant’s outdoor cafe to the city’s code, only to be told by the Department of Transportation that it was no longer following specifications and that they had 24 hours to correct the situation and to be in compliance, then reapply for approval. He was also told the restaurant faced hefty fines if they didn’t comply.

Foxface was featured in the Times last week. As Pete Wells reported:

The couple show me the new planters they had built, and the repurposed plywood from the places that had boarded up during the pandemic. They speak about the research they conducted at the greenmarket before buying a tent, and about the confusing and fluctuating governmental requirements for restaurants to operate under PAUSE.

Our conversation is cut short by the arrival of the reservation-holders eager for their 5:30 dinner reservations... 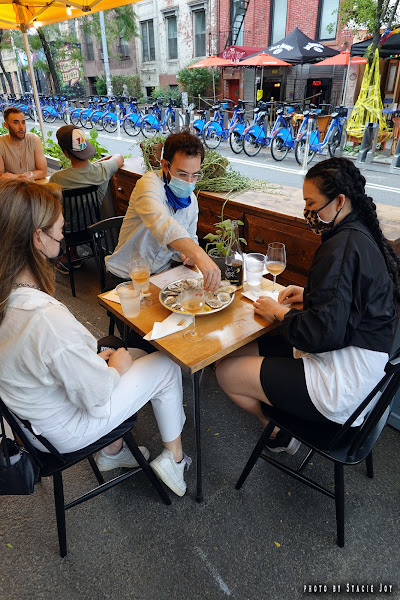 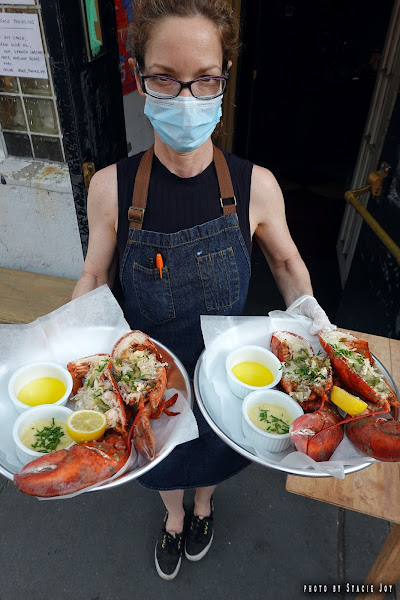 For now, Foxface is open Thursday through Saturday... they are serving sandwiches from noon to 4 p.m., and dinner from 5:30 to 9:30 p.m. Keep tabs on the hours, menus and specials via Instagram. (And they are promising something special for this Sunday.)

There was always the option to dine in in partnership with William Barnacle (which was really fun!) And they're continuing now

but can we get absinthe?

Hey Jo not sure why you begrudge Foxface for trying to be nimble and survive the pandemic.

Wow, I'm impressed this tiny window sandwich place is really a full-on restaurant! The food looks amazing and I'm happy they've now got some outdoor space that will likely draw more customers. Along with the tavern, this looks like a great neighborhood spot.

@Jo/bitter Betty....sheesh. this TINY place has been an exemplar of flexible & creative approaches to survival & service to the community (along with the amaaaazing C&B!!!) throughout this shit show. They've delivered sandwiches, reincarnated as a farm stand/'provisions' supplier -- and now this, all from a space half the size of my very small neighborhood kitchen. I've been so impressed. I offer them kindness & gratitude.

This has been an incredibly difficult time for restaurant owners. It warms my heart to see all the different innovative ways that they have come up with to try and keep standing in these times, not just for themselves, but for their employees too. I love how EVGrieve has been there to report on all these efforts. And anyone who feels inconvenienced by a piece of the pavement being taken up needs to get over themselves. We need to be prepared to make allowances and compromises if we want to make sure that businesses survive and our fellow New Yorkers keep their jobs and livelihoods.

@Jo - I think if you look at the duration of the open restaurants program, the permitted density, the number of days of inclement weather we can expect, and the setup cost, you will see that this is only an opportunity in the sense that it allows us to serve food in more ways than in a bun. Financially it's probably a wash.