East River Park actions: A petition for Gov. Cuomo; a plan for an Art Attack 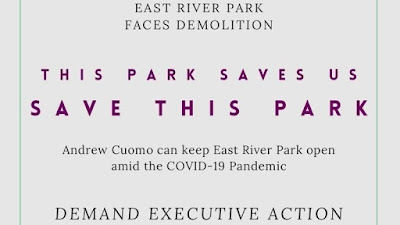 There's a petition in circulation now asking for an executive order from Gov. Cuomo "to stop the City from demolishing East River Park during the pandemic."

You can find the petition at this link.

We are raising money for paint and supplies for our Art Attack Project at the East River Park mid-September.

Our mission is to stop the destruction of our park by creating the biggest mural in NYC with the help of local artists, nonprofits, activists and local residents of the Lower East Side and East Village.

We plan to paint the entire promenade along the river from Montgomery to 12th Street — and the historic Amphitheater where Shakespeare in the Park began in the 1950s.

We are confident that with this Cultural Protest we plan to achieve the following:
- Buy more time for the city to to reevaluate the current plan.
- Do more intensive outreach with the community and the residents along the East River Park.

The link is here.

As previously reported: Last November, City Council signed off on the hotly contested flood-protection plan that will bury/elevate East River Park by eight feet as part of the East Side Coastal Resiliency Project. Construction is expected to start this fall.

You can read more about various community efforts at the East River Park ACTION website. You can find the city's East Side Coastal Resiliency Project website here.
Posted by Grieve at 11:45 AM

Paint the walls or something, what do you mean paint the entire promenade? Annoying.
The plan to demolish the park is idiotic as there is decades of growth. Supporters want a McPark.

Cuomo might just be able to swoop in and save the park like he did with the L train. He doesn't care about DeBlasio's corrupt commitments to shift that much money. In fact he might get a kick out of shafting DeBlasio.

Signed and donated money to this much needed cause.

I really hope they cancel this poorly thought out construction project which is a colossal waste of money. The people of the LES/EV desperately need the East River park as a refuge, a place to go to and decompress from all the stress of living in NYC during the Covid 19 pandemic. Even though the park has seen better days as I just walked it yesterday and saw that it overgrown with weeds and is filled with garbage like empty beer bottles and cans everywhere. Reckless individuals driving motorized mopeds and electric bicycles going very fast on the parks pedestrian walkways almost hitting joggers and pedestrians like myself who are just walking along side of the river with no sign of NYPD or Parks Enforcement officers anywhere.

As much as I love East River Park, and I’m there practically every day, it is really turned into a shit show over the last few years. It was as if after the last renovation, people couldn’t wait to destroy it again. And now we have all these idiots zooming up and down the Promenade on gas powered mopeds and electric bikes, Some of them blasting music as if everyone wants to hear their own personal soundtrack of curated bad music. I’m amazed there aren't more accidents, especially with all the small children who are allowed to randomly run in and out of the traffic zone as if they were playing Frogger.

In order to escape the weekend madness I ride down past the park, past Chinatown and the South St., Seaport where are none of this kind of behavior or destruction is on display. And then I ride through Battery Park, where again it’s clean, no beer cans or trash strewn everywhere. And once you hit the west side it’s like paradise. There are beautifully trimmed grassy areas, places to eat and drink, and no trash at all. There are no barbecues with gallons of lighter fluid being poured onto the flames, spewing toxic smoke and fumes in every direction. And there are no electric bikes or gas powered mopeds constantly zooming up and down.

So while the city may be destroying East River Park this time around, unfortunately the residents of the East Village and the Lower East Side have done a pretty good job of destroying it themselves already.

It couldn't hurt to write individual letters to these representatives.

As all of us who suffered the consequences of the Hurricane Sandy flooding can attest, this area has to be shored up. The work should have already been done. We won’t have any park at all if this area ends up underwater. We also need to focus on making it enjoyable for everyone when it does reopen fully. Like the previous poster points out, so many people treat the area like a racetrack or dumping ground. Let’s figure out ways to make it safe so our older folks don’t have to walk in fear of not being fast enough to jump out of the way of a speeding bike.

Excellent comments Giovanni I whole heartily agree with you!!!!

We won’t have any park at all if this area ends up underwater.

Why not? It did in 2012 and made it through fine, if a bit soggy. Within a couple of weeks it was back to normal.

The city estimates 5 years to rebuild the East River Park, but we all know how the city runs things. I predict, if the project goes through as planned, that the ERP will not reopen for at least 10 years. This is a tragedy for all the residents of the East Village who rely on this park for relaxation and decompressing from city life. Sandy was a freak storm that did cause waters to rise through the park and into neighboring streets, but the surge was gone without any intervention in a matter of days. As far as basements being flooded in neighboring buildings, this is a matter of individual building regulation and preparation for events such as huge storms. I suspect this plan to rebuild the park is much more about allowing developers to take over and build right up to the promenade, not about protection from future storms.

Where is the city getting these billions of dollars to do this rebuild? Especially now, considering the city has been so hard hit with lack of tourism and business shut downs from the pandemic. Residents throughout the city have been leaving in droves. This would be another reason for people to leave.

A real consideration is the big pile of dirt won't work if the Atlantic decides to come visit again. Spend that money hardening the infrastructure in the flood zone. Losing power for 24 hours after a flood is an achievable goal. Stopping another Sandy with a dirt wall is not.

Trash, etc. are not a function of the quality of the residents; they're a function of the infrastructure and services provided. The city wants to cater to the people in those schmancy high-rises and expensive condos over there in Chelsea and couldn't care less about the Vladeck Houses residents.