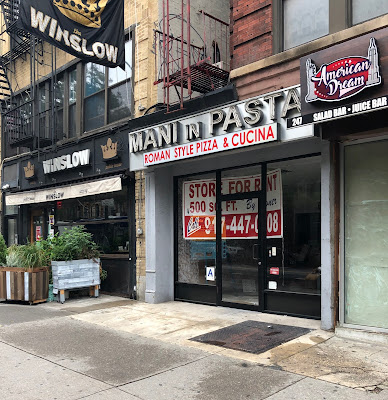 A for rent sign is now up in the window at 245 E. 14th St., marking the end of Mani in Pasta's tenure here between Second Avenue and Third Avenue.

There isn't an official word from ownership yet about a closure. In early June, they launched a crowdfunding campaign after their shop was looted while on the COVID-19 PAUSE.

On June 2, at approximately 1 a.m. our 14th Street location got broken into and robbed. After business being closed for almost 8 weeks due to the current pandemic this strains our financial situation even more.

This restaurant is our home away from home, our provider. Not only to us but to our Family and Friends who have been with us since the very beginning. Our hearts are shattered with the realization that we could potentially close down permanently.

Mani in Pasta had plenty of fans, such as Rob Patronite and Robin Raisfeld at New York magazine who were impressed by the restaurant's Roman-style pizza via Giuseppe Manco, the pizzaiolo-chef and co-owner.

This was the second location for the Italian restaurant when it opened back in December 2017. They also had a spot on 37th Street between Fifth and Madison.

Email ThisBlogThis!Share to TwitterShare to FacebookShare to Pinterest
Labels: Mani in Pasta

Read the reviews and decided to try it out; ordered a couple of different slices, one with what was promised as having shiitake mushrooms, but instead of fresh shrooms they put canned button mushrooms on instead, so I wound up with slimy blobs of fungi on what was otherwise a nice, if somewhat pricey, slice. I asked about it and was told they'd run out of fresh, so they subbed the canned instead, rather than telling me before they made it so I could decide if I wanted to proceed or order something else. Never went back.

So sorry to hear this. We loved the lasagna, chicken cutlet, and meatball pizza. so good!

I think they could never overcome the name, which whatever it means in Italian, sounds kinda gross. The food was good, though. Sorry to lose them.

I loved this place, I loved their food and their kindness.
Everything about it--the fabulous pizzas, pastas, the presentation, the decor, and their hospitality--always made me feel in the best ways that I was back in Italy. I always felt grateful to the friend who introduced me to the place and to the owners and Giuseppe, who offered a wonderful gift to the neighborhood.
In bocca al lupo, Mani in Pasta, e grazie per sempre dal mio cuore!