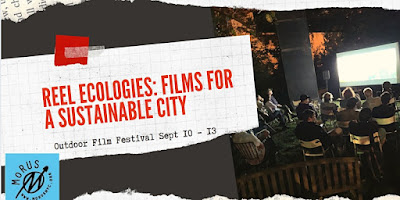 Updated 9/9: The NYC Parks GreenThumb, the entity overseeing the community gardens, has nixed the screenings Friday through Sunday at the Peachtree Community Garden over concerns about COVID-19.

The Museum of Reclaimed Urban Space (MoRUS) on Avenue C is hosting an end-of-summer tradition — its 8th annual film fest, a four-evening event titled "Reel Ecologies: Films for a Sustainable City" that starts on Sept. 10 at Le Petit Versailles.

Here's the festival schedule with details via the EVG inbox:

A lively, living mixed-media series of shorts featuring films from 1930s to 1970s. In keeping with Le Petit Versailles'legacy of creative disruption, the evening will include avant garde movies such as "Killers of the Insect World" and "Woody Woodpecker & The Termites from Mars" with live sound by LeLe Dai aka Lullady, a radio collage soundtrack by Jeanne Liotta and live soundtrack performances by Pinc Louds and by Richard Sylvarnes.

Two short documentaries about sustainable farming in NYC — "Guerrilla Gardeners in Queens" and "Feeding the Future, New York City’s Experiment in Urban Agriculture Part 1: Grow" that show that urban agriculture is sustainable and doable — will serve as the introduction to the classic, dystopian food thriller, "Soylent Green" in an effort to provoke conversations around the long-term effects of big agriculture.

The documentary "Soul Fire Farm" examines the eponymous BIPOC-centered community farm in Upstate New York, which was created to end food apartheid. Marisa DeDominicis, who began her urban gardening exploits in the vacant lots next to the 13th Street squats, will introduce the film. Saturday's feature film is "A Place at the Table," a documentary nominated for Grand Jury Prize at the 2012 Sundance Film Festival that explores the economic, social and cultural damage caused by hunger in America.

The noble honeybee gets its own night with the screening of a film from educational leader "Bullfrog Films: Honeybees" is a short exploring the role of honeybees in a common garden. It will be introduced by a neighborhood beekeeper ... followed by "Dirt," a 52-minute documentary that chronicles the history of East Village community gardens.

You can find ticket info here. Pre-registration is required, and there is very limited seating for the Film Fest. 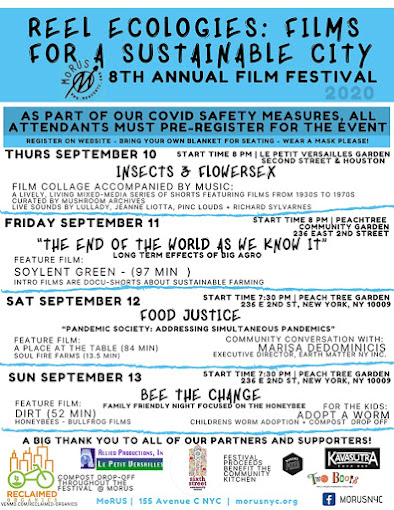 TO CLARIFY!! Film Viewing is from the sidewalk ONLY in front Le Petit Versailles garden. Presumably that protocol will also be in place at Peach Tree garden.