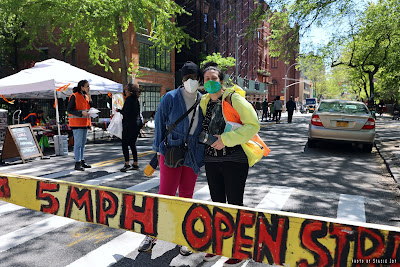 On Thursday, City Council voted (39-8) to make the Open Streets program permanent — even after the pandemic.
The bill has moved on for approval by Mayor de Blasio, who has already signaled support of the program.
According to various media accounts, Open Streets will be overseen by the Department of Transportation or local community organizations that can apply to manage the programs in their neighborhoods.
In addition, roadways included in Open Streets will be up for annual review, at which point the DOT can recommend permanent design changes to streets, such as the construction of pedestrian plazas.
Per Gothamist:

Currently, there are around 235 Open Streets locations comprising around 70 miles (there are roughly 6,000 miles of roadway in New York City). Only about 50 of those locations are managed by a local partner, like a community nonprofit or a restaurant; the rest are technically managed by the NYPD and the DOT, and are essentially neglected.

In the East Village, Avenue B between Sixth Street and 14th Street is hosted by the Loisaida Open Streets Community Coalition, which continues to add programming. (For instance, they teamed up with the 14th Street Y for a series of fitness classes between 13th Street and 14th Street on Sundays and Wednesdays in May.)
Local City Councilmember Carlina Rivera introduced the legislation, Int. 1933-A. She discusses the next steps in this Streetsblog op-ed from Saturday:

With this legislation passed, I'm excited for the future of open streets. That doesn't mean there aren't still challenges ahead. City agencies must now take greater ownership in these efforts and swiftly respond to people who have committed vandalism and physically and verbally threatened open streets volunteers. We need Mayor de Blasio to expand on the $4 million he committed in this year's budget to open streets operations and to start sending out his new City Cleanup Corps workers into communities to help keep open streets barriers set up and our streets free of trash.

You can read more about Open Streets at NY1 ... Gothamist ... and Streetsblog.
Photo from Saturday by Stacie Joy
Posted by Grieve at 6:30 PM

I don’t mind the open streets, but I can’t wait to get rid of the the lean too’s in front of the restaurants!!

Avenue B Open Street will become a real inviting environment the day NYC Department of Transportation will change the signs from Alternate Side Parking to No Parking (or Loading Zones). Right now there’s no Open Street space when a delivery truck needs to bring goods to businesses or residents: 50% of the space is occupied by parked cars already and then 25% more is overtaken by the truck. The last 25% are maintained for emergency vehicles and then that’s it. Parked cars are moved rarely: one stayed for 116 days, the other is 38 days and counting. There’s another which is parked for 21 days and counting. Removing free parking will also deter people from driving on Avenue B since they will know not to look for free spots where they don’t exist. This can be done overnight and the improvement will be happen immediately.

Some people need and rely on their cars to make a living. I am one and no, public transit and uber isn't gonna reach my clients outside the city or haul my load around. Stop killing those of us who actually have legit car reasons as residents. We've already had citibike and the shanty shacks take up a good portion

Once restaurants and bars have reopened to full capacity, the outdoors dining structures will provide more seating aka more staff needed, more jobs!! And besides, who doesn't like to sit outside in the warmer months?

Open Streets is a great idea, but like many great ideas, it can have some not so great consequences. The streets of the EV, formerly used by motor vehicles of residents and visitors, are now choked with bike lanes, new hotel loading zones, bus lanes, restaurant seating and the continuing takeover of CitiBike racks. This is not a wealthy neighborhood. Many residents cannot afford the $500/month parking fee for a car and face increasingly more difficult and time consuming efforts to find a legal parking space. Residents often take 30-45 minutes to find a legal spot. Visitors give up and leave, resulting in a loss of business for local shops and restaurants. If we want people to come back to the EV as the City reopens, we need to make it a more welcoming neighborhood, not less.

Pedestrian Plazas are nice but we need more green space too. Green space in these areas is arguably a better fit than a slab of concrete.

With the new free bar storage, retail rents will go up because there will be more customers and landlords can charge more. There will be further displacement of non-bar storefronts.

Too bad all this is done at the expense of regular people who just need to get from point A to point B without having to go blocks out of their way.

Now that there is a budget, will
Every intersection be able to
Have a sign?

I am hesitant to get too excited about this idea continuing post (if there ever will be) pandemic. Imagine nightlife from bars and restaurants on the sidewalks and into the streets until 2 am each night. How long before the city starts renting these spaces to commercial enterprises beyond the local places which fought for survival this past year. Will sleepy Ave B will become what the streets around Rivington and Ludlow below Houston have been? The city seldom changes policies without some way of benefitting the city's tax coffers. Just think about it.

There are so many reasons to describe what a nightmare this is going to be. Like so many things, not at all well thought out as far as the consequences and inconveniences. Just to name one.. what repair company will want to come in(usually from the outer boroughs) to fix your stove, refrigerator, waterleak, clogged drain, air conditioning etc, etc. If they are not able to drop off parts, equipment and find at least somewhat convenient parking etc.they'll either say no or double their rates.You design pedestrian friendly nieghborhoods with this in mind not the other way around. And imagine living on Arthur avenue in the Bronx now with the outdoor dining and trying to have a peaceful night's sleep!

If we get rid of all the (taxpayer-subsidized) free parking, there will be plenty of room for deliveries and drop offs.

If they want to get cars off the street then they should give tax credits to developers to build garages, as they do for affordable housing. Cars will always be needed but there aren't enough garages to store them all.

This segueways so conveniently into the UN Habitat for Urban Cities program, where cars/ motor vehicles are eliminated for bikes and become purely pedestrian spaces. Funny how its all just so 'organically' coming together. Will these storefronts pay extra rent for the extension of their inside retail spaces confiscating the public space outside? Will nonfood tenants also get the free public space extension?

This is another disaster from Commie Deblasio. Why does the city get to privatize public land? We pay for access to those streets. There is zero lack of pedestrian space in Brooklyn, yet there is major traffic congestion. So Commie D's response is to further reduce public vehicle access? This initiate is another desperate attempt by old out of touch schmucks to appear 'progressive'. NYC is NOT other European cities where ped spaces are made available in smart and discerning ways. NYC was beautifully planned hundreds of years ago, yet modern ignorant disconnected schmucks they they still know better. NYC leadership is embarrassingly out of touch.