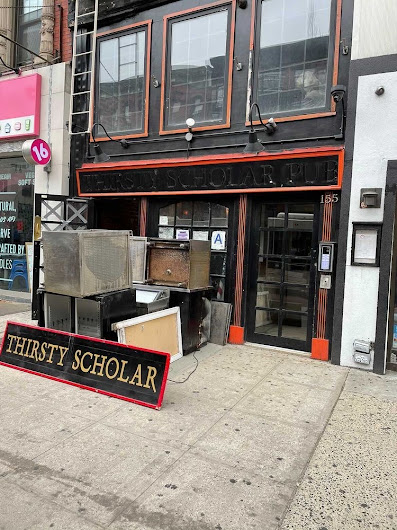 Renovations continue at the former Thirsty Scholar, 155 Second Ave. between Ninth Street and 10th Street... the Thirsty Scholar signage has been removed. (Thank you to Melissa McIntyre for this photo from yesterday morning!)
As previously reported, new owners, David Harris and Cris Nastasi, will be opening a like-minded bar here called the Long Pour. Harris served as manager of Bull McCabe's on St. Mark's Place and previously worked as a bartender at now-closed block-mates the Telephone Bar & Grill and Ryan's Irish Pub. Nastasi was born and raised in the neighborhood and spent 15 years as the technical director of "Stomp" at the Orpheum Theatre on Second Avenue.
And Pete the bartender from the Thirsty Scholar will be working at the Long Pour as well.
H/T Steven
Posted by Grieve at 4:59 AM

Email ThisBlogThis!Share to TwitterShare to FacebookShare to Pinterest
Labels: the Long Pour, The Thirsty Scholar

Pete is a great bartender and an even better guy.

Very happy for all involved!

I really hope this a going to be a neighborhood bar.... tired of the bridge and tunnel douche 13th step places

The Long Pour? Sounds like a cousin to the Hard Swallow.

May all the Thirsty Scholars receive a Long Pour in their new watering hole.