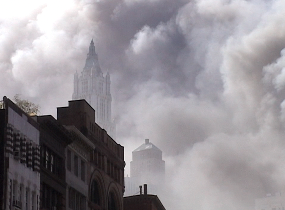 The Tompkins Square Library is screening Luigi Cazzaniga's documentary "9/11: What I Saw" tomorrow afternoon at the branch on 10th Street.
Here's more about the premiere of this film via the library's invite:

A documentary masterpiece featuring rare footage shot on the morning of 9/11 by Italian artist Luigi Cazzaniga... While some of Cazzaniga’s now-historic footage of 9/11 has been shown on CNN, HBO, RAI, and other television networks around the world as well as the 9/11 Memorial and Museum in Lower Manhattan, Cazzaniga had never edited it into a film of his own. Until now.
It was during the pandemic when Cazzaniga, a longtime correspondent for Italian television, was able to sit down with this heartbreaking footage and reckon with what he saw that day. With editorial help from Hernan Valle and producers Ilka Scobie and Exquisite Pandemic editor Rick Whitaker, Cazzaniga was able to actualize his vision for this nearly hour-long film in time for the 20th anniversary of that tragic event with so many global consequences.

The in-person screening takes place tomorrow afternoon at 3. You can register to attend at this link. Masks are required at the branch, 331 E. 10th St. between Avenue A and Avenue B.
Posted by Grieve at 1:00 PM

This comment has nothing to do with this documentary.

I for one having lived through that horrible day as many us who read EV Grieve, cannot bring myself to return to that time of such sadness, anger and uncertainty. I will never forget but I am done with the images and video clips, this is for those which still have not processed that day or were too young or not born yet.

@1:40pm: Having also lived through that day right here in the East Village, I'm not sure anyone ever finishes "processing" that experience.

For myself, I don't need to be "reminded" of 9/11 - not now, not ever. My memories of that day, and the weeks that followed it, are vivid and readily accessible.

There is no reason for me to ever go to the museum there. Whenever I've had any visitors who wanted to "see Ground Zero" (as they always put it, as if it were a tourist attraction), I gave them directions - but I never accompanied them.

Tomorrow I will remember many things, many of them unwillingly. No photo or video will be required.

Agree with the first two commenters. The memory is still vivid and the pain is still raw. This last week with all the reminders has been difficult and I plan to spend the weekend in nature, unplugged from media and the phone. My condolences to those who are still mourning loved ones.

Completely agree. I was in my office on the 46th floor of One Liberty Plaza, directly across the street from the south tower. Our building jumped when the second plane hit the south tower. We looked out our windows, which faced south and east, so not toward the towers, and all we saw was a huge amount of paper which had been sucked out of the towers floating in the air. A colleague of mine and I hopped in the elevator and were out of our building on the Broadway side within a minute.
I walked uptown toward my 9th St. apartment, and the first tower came down when I was in Soho. That horrible day and it’s aftermath are seared in my memory. No reminders necessary. And all that has been done in the name of avenging 9/11, or preventing another one, has likely done much more harm than good. What a waste of life, money and time.

Luigi's deeply humane and sensitive film isn't offered as a reminder. It's offered as art. It's beautiful.

I agree whole heartedly with the above comments.
That day, that month, the 20 years of war.....I've had enough, thank you very much.
It's a tragic event, that won't be forgotten by anyone who experienced that day. Time to learn from it and move on.

Good thing we have this blog where we can at least completely ignore the timeless saying "to each their own".