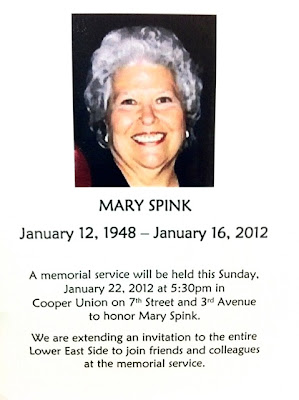 As you may have heard, Mary Spink, the community activist and executive director of Lower East Side People’s Mutual Housing Association, died on Monday. She was 64. As The Lo-Down first reported, she had been battling a failing liver and kidneys.

She was a well-respected member of Community Board 3. Spink has had a long, varied career. Per The Lo-Down: "After arriving in the city as a teenager, she owned and operated a dress shop, a newsstand and a hardware store. She was a cook, a record promoter, a brick layer, a dancer, a waitress, a plumber, an office manager, a superintendent and a property manager. She served as Director of Drug Prevention for the Archdiocese of New York."

"Mary was a feminist in a league with Emma Goldman, a community activist in a league with Jane Jacobs, a personality in a league of her own," Lyn Pentecost, executive director of the Lower Eastside Girls Club, told me via email. "Without Mary as our Board Chair in our critical years — we would not be building a. Girls Club today."

Tomorrow at 5:30, community members will take part in a service at Cooper Union (Seventh Street and Third Avenue).
Posted by Grieve at 3:00 PM