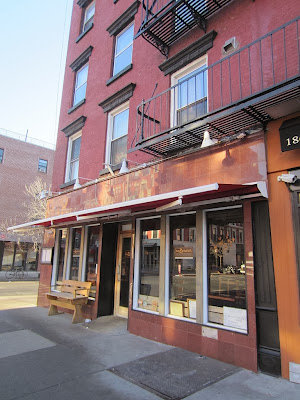 We noted last Tuesday that Tarik Fallous, the owner of Table 12, had changed concepts, converting the cafe-bistro on Avenue A and East 12th Street into Au Za'atar.

Au Za'atar is a Middle Eastern restaurant with a French twist. Our menu offers everything from Lebanon's national dish (Kibbe Kras) to classical Parisian fare with influences spreading from the Arabian Peninsula to the Mediterranean Sea.

At the time of our post, the restaurant was still in soft-opening mode … and the menu we posted from the Au Za'atar website hadn't been finalized. (You can find the menus now at the website.)

According to a restaurant representative, there was an official soft opening at Au Za'atar this past weekend… and today is the official opening day… they also supplied us with photos of the interior, which was designed by local resident Frank Linkoff, who's an artist and filmmaker/producer. 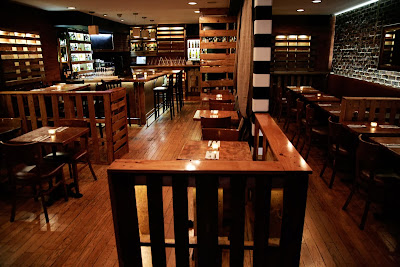 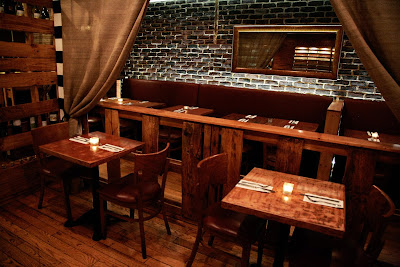 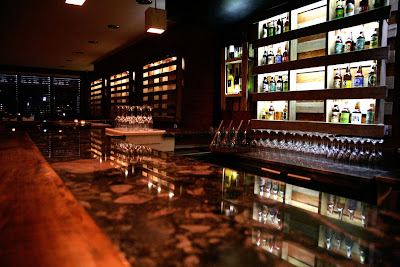 Fork in the Road had a preview Friday:

"I always looked for a place where we could have these kinds of dishes the same way we had them back home," Fallous says. He craved lamb shank and lamb chops sprinkled with za'atar and roasted, tabbouleh at every meal, hummus and fresh babaghanoush, and escargot cooked with herbs and white wine (there is a lot of French influence in the culinary traditions of these countries, Fallous explains).

Au Za'atar offers all of those dishes, divided into small mezze plates and larger platters, as well as a number of daily specials, spicy stuffed fish, different kinds of kebabs, and kebbe kras, a blend of bulgur wheat and beef that is Lebanon's national dish. "We're trying to make it a place where people will come to have a meal once or twice a week," he says.

Meanwhile, aside from the concept change at Table 12, Kool Bloo, the fast-food takeout specialist that shared the back of the space, has also disappeared in recent weeks with the renovation… 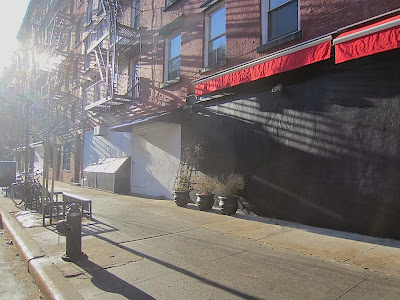 This place looks cozy, especially in the back. I might give them a chance. One chance.

Table 12 was totally unexciting, which is why I liked it. Also it was spacious, so rare in NYC. You could sit forever with your laptop. They had an extensive tea selection, and the food was tasty. Compared to Ost, kittycorner across the intersection, Table 12 was the place to relax and/or work without caring about the "scene." I hope the new place will be amenable to laptopping, but somehow I doubt it.

Kool Bloo has another outpost on lower 6th avenue; I wouldn't cry too much for them.