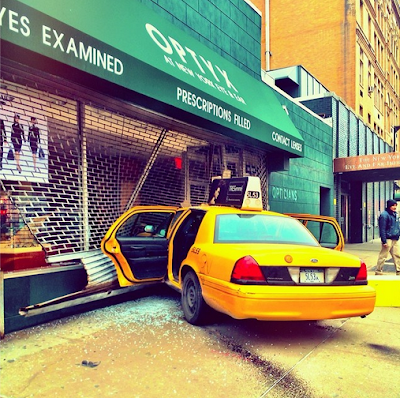 An EVG reader sends along the above photo from a little earlier this afternoon (roughly around 4:45), noting "Multiple fire trucks, cops, etc. Fortunately it appeared that no one was injured." 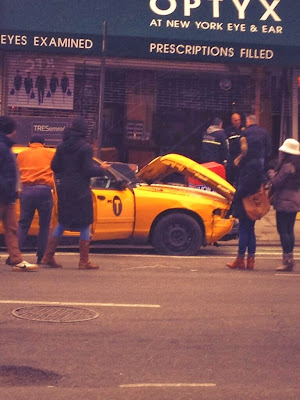 At this point, we don't know any other particulars… such as the cause of the accident…

Plate on cab that crashed store today at 14th/2nd has 18 violations on record, 4 for running red: https://t.co/4Z2tpKitJs h/t @alter_spaces

Here's a photo by ddartley via Flickr, where you can find a few more shots… 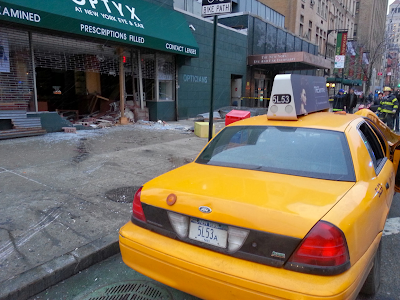 And several people have pointed out the fact that the driver crashed into a storefront with an awning reading "eyes examined."

A witness told 1010 WINS reporter Gary Baumgarten that the vehicle was driving fast when it crashed through the front window. "He was driving extremely, extremely fast," Richard Ciero said.

The impact was so loud that a nearby store owner came outside thinking that a bomb had gone off.

It was my daughter in the back of the cab. She was on her way to the airport. She has severe whiplash. Very grateful her injuries were not worse.

Like the classic Bruno Kirby line in “City Slickers", the obviously vision impaired cabby then said: ”I’ll take one of those as well.”

The "cause of the accident' is presumably that the driver was...a NYC taxi "driver".

I live nearby. Heard and saw the whole thing. Girl was in the back coming or going from the airport and had luggage. She jumped out of the cab after it crashed and was definitely freaked out. Seemed alright though. Crazy that no one was hit on the corner, which is incredibly busy. I saw the cab driver right after it happened and he seemed a bit defiant and yelling at something or someone. Cops and fire dept were there less than 2 minutes after it happened.

Luckily, it appears nobody was hurt. At the same time, this likely also means we won't hear about this in the news. Driver won't pay any consequences. Just another day in NYC. Nothing to see here. [Rage]

Of course it's the driver's fault, he wasn't riding a bike!

yes, another "professional driver" totals a store. until licenses are revoked, expect more of the same.

This could have been so much worse. It makes me think of the accident where the tourist lost her leg after being hit by a cab. With all of those violations, he shouldn't have even been allowed to drive.

So when is it that the "police" "traffic agents" whoever the hell it is - when are they going to take a stand against these out of control cab drivers!!? These individuals get the opportunity to violate our parking laws, our traffic laws and our lives when those responsible to protect, look after us and care for us sit by collecting revenue and say there's nothing wrong here. I say we begin violating the lives of those who are there to serve the populas and see where we can take it!

We need black boxes monitoring speeding in cabs and speed cameras everywhere (if the Patrolmen's Benevolent Association and their upstate Republican legislator puppets will ever let us). Time to go full Orwell on speeding in this town.

Also, HOW many violations? Jesus, mayor, just fire the whole freaking T&LC and start from scratch.

Most cabbies are out of control, which makes me feel bad not only for all of us street-users, whose lives are in those idiots' hands, but also for the few decent cabbies out there. I'm sure not all of them want to speed and cut through multiple lanes of traffic to pick up fares, for example, but that's what they end up doing to compete with all the aggressive assholes. So cracking down on reckless cabbies will hopefully have the added benefit of helping the decent ones to make a living and come back home unharmed at the end of their shifts.

+1 for monitoring speed of all cabs. There's too much at stake to let these guys police themselves and NYPD doesn't have the resources to keep us safe obviously. Many are safe drivers, but many pose a mortal danger to pedestrians and cyclists alike. Also, the synchronized lights on 2nd Ave encourage idiots to try to race down 2nd ave. So lucky that (it seems) no one was injured on the sidewalk. These accidents can change lives forever. I say this as someone injured in a similar incident in June 2013 on 2nd Ave and 4th st.

It was my daughter in the back of the cab. She was on her way to the airport. She has severe whiplash. Very grateful her injuries were not worse.

I hope your daughter recovers and is feeling better Tracy B. I saw a couple of the later news reports that said 2 people were injured severely, while the earlier reports mostly said the injuries were not serious. I didn't see any other cars involved so i womder how did the taxi end up on the sidewalk and inside a store? Was it just speeding or speeding plus something else?

At least the news reports I saw didnt say this happened in Gramercy Park like they usually do, but their reporting as usual was very sloppy.

Whiplash is a serious injury which sometimes doesn't start to cause pain for a few days, and then the effects can last a very long time. Even when people walk away from these accidents the injuries can be very serious but if the press doesn't see buckets of blood on the ground or mangled bodies they usually report that the injuries were minor even though they can last a lifetime. Thank goodness that wasn't the case this time but the cab could have easily killed people and cyclists on that corner which many of us around here pass by almost daily.

We need speed cameras and better limits on how fast these taxis drive, most of the bad accidents I see involve taxis and drunk drivers, and there's not much difference between the two of them so we should start dealing ith the taxis just as harshly.

I like the idea that's been floated that will put some device in the cab, tied to the speedometer and the meter, that can automatically shut off the meter when the cabbie exceeds the speed limit by a certain number of mph or a certain number of seconds. Of corse the taxi lobby will fight that proposal to the death.

Meanwhile, they put up new no left turn signs on 42nd Street; a friend who has driven in NY all her life was behind a trash truck, did not see them, turned left as she has for decades, and lo and behold, halfway down the street waited a young rookie with a ticket book who waved her (and several others guilty of the same "crime") to the curb so he could write them all $150 tickets. I guess we see where the city's priorities lie.

another +1 for speed monitoring. If the City put 1/10th the resources and manpower towards speeding cabs that it does towards parking scofflaws we would be much better off. chasing scofflaw parking is great revenue but they dont sever limbs. 18 prior violations!!! If I had a car and it had 6 prior parking violations it would be in a boot and I couldnt drive it anywehre let alone speed through a storefront. lock it down NYC

I witnessed this accident -

After the car had crashed, the vehicles wheels continued to spin even while the driver was outside. Luckily no one was hurt, saw the woman who was in the cab running around in panic, did not seem to have any injuries other than shock (as we all had whom witnessed the incident).

Luckily, officials were close by to handle the situation as soon as 2 minutes after it happened.

These "professional drivers" are a dime a dozen here in NYC. When will the taxi owners/brokers/garages start taking responsibility for who they're sending out to terrorize us? When will The stop churning out temporary money hungry immigrants?

My girlfriend and I also witnessed this accident. We saw the girl with her suitcase get out of the cab; she seemed relatively okay. We never saw the cabbie get out, but I guess he also got out quickly and blended into the crowd.

The cab came very, very close to mowing down a pedestrian on the sidewalk. The pedestrian was so shaken up afterwards that she was sitting on the sidewalk crying. Can't say I blame her. Does anyone know why this happened yet? Was the driver just going way too fast and lost control of the car?

If the driver was "going to fast," then he did not "lose control." He was going to fast. If "control" enters into the picture at all, he CEDED control, by going too fast.

I was one of the girls who jumped out of the way from the cab. I was walking with two other friends. It was very scary. I am thankful that the newspaper boxes were there because when the cab hit them my friend arm hit me in the direction away from the cab coming in my direction.

didn't a car crash into this same place like 18 years ago ?

While it is stupid for anyone to inject politics into a debate about a car crash and fortunately avoided injuries, but can anyone really be serious in (a) advocating for vastly broader cameras and monitoring of people, and (b) saying that the lack of cameras and government monitoring is the fault of upstate republicans???? Really???