At the memorial for Wen Hui Ruan on East 6th Street 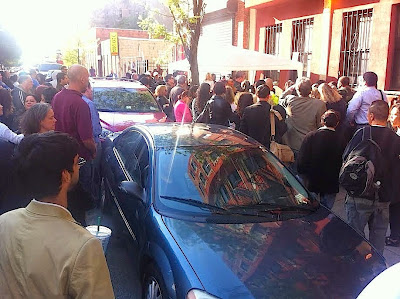 Nearly 70 people were in attendance just after 6 tonight for a candlelight vigil for Wen Hui Ruan, the 68-year-old resident who died following an attack here at 745 E. Sixth St. last week.

City Councilmember Rosie Mendez's office organized the event to give his "family and the community a chance to come together to remember his life and to take a stand against violence in the neighborhood."

While a bright light has been dimmed for the Ruan family it has helped to shine a brighter light on the tumult that still exists in our hood.

I sincerely hope that Rosie will come to the assistance of all residents in curbing violence and disorder.

I realized I know this building; it's only a few blocks from where I live, and I know people who live here.