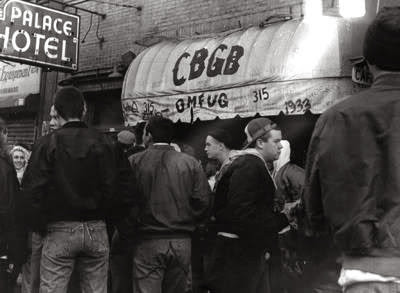 Word is spreading that Karen Kristal, matriarch of CBGB, died this past weekend.

We don't have a lot of biographical information at the moment. She was in her late 80s. We will update this post when more details are available.

Tim Hayes, who owns the CBGB brand and is the founder of the CBGB Festival, said that "she made a huge impact on the music scene in NYC."

"She was the godmother of hardcore music in NYC," he told us. "She took care of the kids that came to CBGB and the hardcore shows on Sundays were all hers. Her role in CBGB was immeasurable and history has not done her justice yet. I will miss her deeply."

David Poe wrote this about her on the newly created CBGB: Punk and Hardcore page on Facebook:

"I will always remember Karen on Sundays checking id's and calling kids' parents when she sniffed out a fake one Her contributions to CBGB are well-known, and it's true enough that venerated space would not have existed as it did had it not been for her efforts. Karen was a true patron of the arts and embodied the indie spirit."

Here's more on her from a Village Voice article from September 2007:

Through the late 1970s to the early 1990s, Karen was a fixture at the door of CBGB and behind its bar. In that time, she developed a reputation, among patrons, bouncers, bartenders, and musicians alike, as a bit of a humorless hard-ass. Skinheads obeyed her command. The Ramones hid their joints when they saw her coming.

"I was more scared of Karen than I was of the skinheads," said George Tabb, a founding member of the False Prophets, former CBGB employee, and longtime Kristal family friend, as well as a reporter who covered the scene at the club for Maximum Rock'n'Roll. "They all had this respect for her. She put on the matinees — it was her idea, and that basically started the whole hardcore movement in New York."

Karen had been involved in an ugly legal battle over the estate of her husband Hilly Kristal following his death in August 2007. You can find the background of that suit at the Voice.
Posted by Grieve at 7:52 AM

RIP Karen if it's been confirmed.

It's debatable she created the CBGB Sunday hardcore matinees, but it sounds entirely plausible. No one ha ever come forward to say he or she proposed them to CBGB so Karen very well might've come up with the idea. She definitely greenlighted them or did that with Hilly.

With all due respect to Karen, she didn't start the hardcore movement in NYC. George Tabb obviously wasn't around when A7 the first NYC venue to have hardcore punk shows on the regular was having them and cultivating a scene years before CBs started the mats. Get your facts straight, Furious George.

R.I.P. Karen, whether she started the "Hardcore scene" or not doesn't matter!!! I spent a lot of Sunday afternoons there!! It was a great time to be young!!!

I don't see anywhere in the article where it says that Karen Kristal created the sunday matinees or started the NYHC scene.

I think the first two commenters were reading a different article.

I think the grandmother of hardcore title is because she was at the Sunday hardcore shows all of the time trying to keep an eye on all of the kids. People didn't like her because she was always throwing them out or getting them into trouble. A group of kids once put her in a garbage can and rolled her down to Houston Street. Point is that she was deeply involved in the club and that is a fact. RIP Karen.

FACT:
NYHC started at A7 not at CB’s.
Being a regular at CB’s HC matinees from 1985-1990
I remember being 14 yrs old (1985) and handing Karen a fake birth certificate to get in. (Had to be 16 to get in)
A bunch of us would all use the same birth certificate with the same name and we always had to separate in line so Karen did not catch on to us. Most of the time we would just lick our hand and try to transfer someone else’s hand stamp on ours. Which would work most of the time.
If they questioned it we would just say it rubbed off from moshing.
She was tuff.
But the bouncer Dennis was a straight up dick!
Oh the Glory Days of H/C.
The 80’s was a great time on the LES