Updated: Part of East Houston is currently flooded, along with Katz's basement 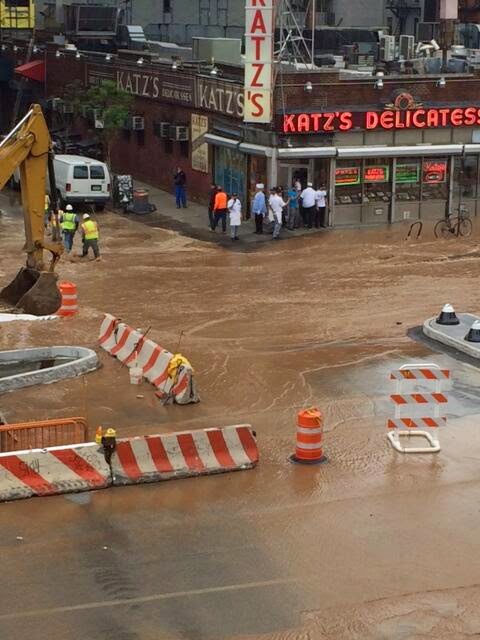 Yikes! Part of East Houston near Ludlow is currently flooding (flooded?). Save the pastrami!

Not sure what is going on at the moment here ... crews have been working on the water mains as part of the never-ending East Houston reconstruction project now in its 457th year...

Thanks to @maraaltman for the photo!

Houston floods. Luckily, looks like the water is going around the brisket. pic.twitter.com/N49wUlKvHQ

The basement at Katz's has reportedly flooded.

Here's a shot of the damage on East Houston... a sinkhole has formed on the the eastbound lanes between Orchard and Ludlow... 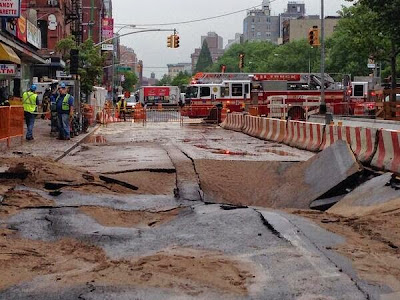 Katz's is still open, despite the water main break. Just don't try to drive on Houston for a while... pic.twitter.com/BNc6c8TtfZ

According to published reports, 13 nearby buildings are now without water after the circa-1959 pipe broke under East Houston. In addition, Brooklyn Vegan notes that tonight's Stone Jack Jones and Ex-Cult shows at the Mercury Lounge have been cancelled tonight.

And there you have it... 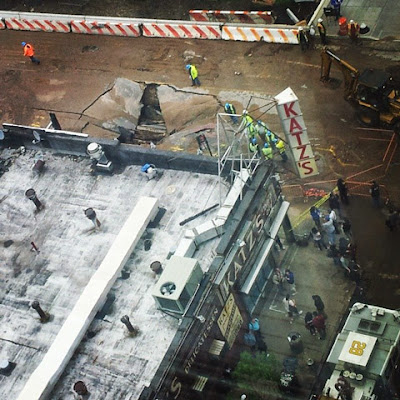 The basement of Katz's is completely flooded, there are reports of pickles floating away. The full sours will never be the same. Heres an Instagram Video

Boo. I was hoping it was pastrami brine.

I guess this is what happens when governments neglect essential maintenance for 30 or more years.

ITS A TOTAL SHITSHOW OVER HERE! Road closures from Houston and Allen to A and Houston towards the FDR. Allen is backed up FOR BLOCKS BOTH WAYS! I have pics any way I could post them? Thanks -CM

Yes, please do send some photos!

Holy crap. Just a couple blocks away, and I had no idea!

Is this causing issues with The F train?

Wouldn't it be great if all the franchise chains and jerky new tenants to the hood got sucked into a sinkhole vortex?