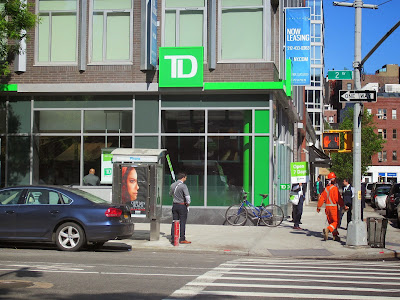 Hey, that TD Bank branch anchoring the Jupiter 21 building on Second Avenue at East First Street officially opened yesterday. We walked by and were greeted by no fewer than 14 TD employees on the sidewalk offering free coffee and pastries or something pastry like. They were friendly! (But we missed the TD mascot!)

Did anyone go in to be among the first 100 visitors to receive a free gift? If so, then please let us know what the gift was!

And, as you know, the corner space was home to the Mars Bar until 2011… And, well, what the hell… 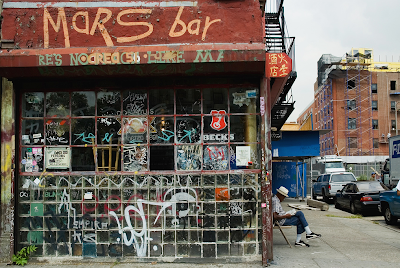 [Photo from 2006 by Ixtayul Martinez]

Meanwhile, some WTF variation of the Mars Bar is returning to East First Street … in a cafe-restaurant-club combo that will feature a juice bar and quinoa bowls.

The fucking TD Bank signage arrives at the former home of the Mars Bar
Posted by Grieve at 10:12 AM

Can we work to expand the "No INSERT BUSINESS" to these chains too? Can we do anything?

Mars Bar didn't give out dog biscuits. So, it's not all bad, just mostly.

Another fucking bank? Really? Instead of the East Village, they should rename it, "The Bank District.'

As crass as it sounds, instead of offering free pastries or coffee, they should have offered sexual favors in exchange of opening an account. Now, that would have been some opening.

You need to wear stilts to deposit here because if you're not 6'4" or taller, you might have see a teller

They were out in force in the morning. As a long time TD Bank customer I stopped by to deposit a check later. They were REALLY trying to get me to agree that they were REALLY convenient for me now. As opposed to the "immense" 6 block walk I had to make to the other branch. It was almost defensive. But they gave me an umbrella for coming in.

I like TD Bank. They are open longer and ate truly about issues and don't transfer you to Bangalore when you call nor do they hard sell. But they already had 2 branches in the neighborhood. I don't see the need for this one even if it is 2 blocks away from me.

god i forgot how great mars bar looked. thanx for the pic!

Anonymous 8:25, There's a credit union at 37 Avenue B. If you have an account there, you qualify for a significant discount on the annual Citibike fee!

Every credit union has it own requirements. The "union" in the name is not equivalent to a labor union. If you live in the EV Grieve Area Of Interest And Influence, you already qualify for the LESPFCU on Avenue B and 4th Street. Or, you might fit into another easily, check out these websites:
http://www.ncua.gov/Pages/default.aspx --> especially http://www.ncua.gov/DataApps/ResearchCU/Pages/default.aspx

Oh, yeah, and I should have mentioned Selfreliance Ukrainian Credit Union on 2nd Avenue. I'm not sure if you have to provide proof you or an ancestor was from Ukraine or if simply an active interest in the culture would do to join the Self Reliance Association, but, if you are a member of that, you and all your descendants can join the credit union. From their website: To become a member at Self Reliance (NY) Federal Credit Union one must first qualify for membership at the Selfreliance Association of American Ukrainians. There are branches of the Association in New York City at 98 Second Avenue, New York, in Uniondale and Kerhonkson New York. An initial minimum deposit of $50.00 is required to open a basic share account, plus a $10.00 membership fee to the Selfreliance Association. Having a share account makes you immediately eligible for the many benefits of credit union membership.

You’re welcome to remain a SRNYFCU member for life, even if you move. Access to credit union financial products and services are available through direct deposits, by mail, fax, phone, NetTeller Home Banking and at thousands of worldwide ATMs (automated teller machines). Once you join, your family members may also apply for lifetime membership. Eligible family members include your spouse, children, parents, grandchildren, grandparents, brothers, sisters, aunts, uncles, nieces, nephews, first cousins and in laws. http://www.selfrelianceny.org/about.htm

I know I'll probably use this branch a lot since I'm down in that part of our neighborhood a bunch, but I'd rather have Mars Bar around. I'll probably feel like a jerk the first time I use it.

Montauk Credit Union on 26th and 6th has open enrollment.