David Schwimmer's high-tech surveillance system helped the NYPD with details about a stabbing that took place early this morning at 333 E. Sixth St.

According to the Post, a 26-year-old john refused to pay a 21-year-old male prostitute for his services … and the slashing occurred as a result … "and eventually spilled into the hallway with the men smashing through a glass lobby door."

Schwimmer, who lives next door, let detectives into his home to watch the surveillance footage.

Meanwhile, blood stains remain on the stoop at No. 333. 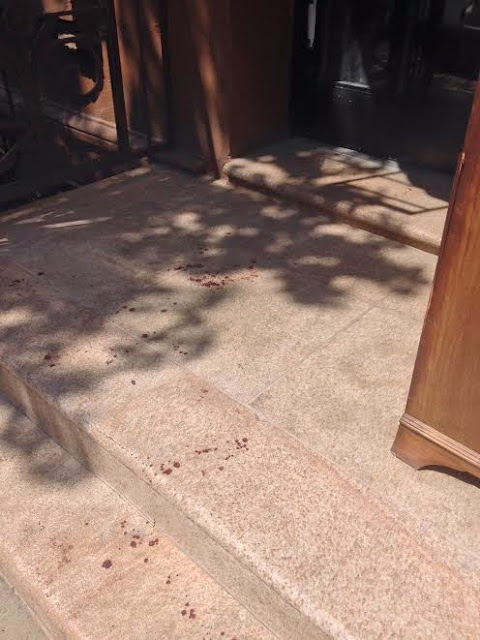 Welcome to the neighborhood David...

Didn't something just like this happen on an episode of Friends? Thankfully joey wasn't seriously injured and the gang never really talked about it again.

I'm curious EV, why is john in quotes, but prostitute is not? That's not how the Post wrote it, so it's not an attribution, and neither is either, both are alleged until there is a conviction. But why "john" and not john? Not being antagonistic, but I really do want to know.

These entitled millennial's don't even pay for tricks!

Good question! Dunno! Just sloppy editing on my behalf (?!)… there isn't any reason for the quote marks… I was in a hurry when I posted this … I removed them...

Just read the NY Post article and it was quite confusing... So did the resident of the building hire 2 prostitutes - one male and one transvestite? Did I understand that correctly?

If only the transvestite prostitute had been wearing GoogleGlass, the pictures and videos would have been posted online instantly and we could have solved the crime ourselves. No need for security cameras anymore all you tranny prostitutes, just wear your GoogleGlasses loud and proud and you'll never get ripped off by a customer ever again. And if you do at least you'll have great pictures to prove it.

Could he BE any more heroic?

I'll get shit for saying this, but I never expected a young gay guy in the east village needed to pay for it. its the thrill of owning a person for a bit. You think some cop tipped off the Post about this one? - witnesses and helpful neighbors usually don't get listed int he police log.

NYGrump, as a former hustler, I can assure you that you would be surprised who pars to play. A lot of times it is younger, attractive, wealthy guys who just want to get off and then go about their lives. No attachments, no emotions, just a good time for a relatively small amount of money. It's not that they couldn't go to a bar and pick someone up, it's that its easier to make a call and stop at the ATM.

"Ross" was the most annoying character on the most grating sit-com of all time. The actor who played him is pretty much one of the incapable actors to ever achieve smash success. Yet he continues to be the subject of talk amongst a community that prides itself on being urbane and sophisticated.

Anonymous 3:28 -- East Villagers are neither urbane nor sophisticated.

Giovanni, your comment reeked of transphobia and in case you're not aware yet, "TRANNY" is a derogatory slur against transgendered individuals.

Just learned another word: 'transphobia', but I always suspected that 'tranny' might be considered offensive. Never used it myself. It's amazing what one can learn on EVG.

Actually, there is heated debate right now about whether tranny is a denigrating word. East Village resident Justin Bond embraces the word for herself. So does Kate Bornstein. But many others don't. So it's not a settled issue.

We can go on and on about "TRANNY", but Giovanni's comment undeniably reeked of transphobia.