Crowdfunding campaign underway for the family of Wen Hui Ruan 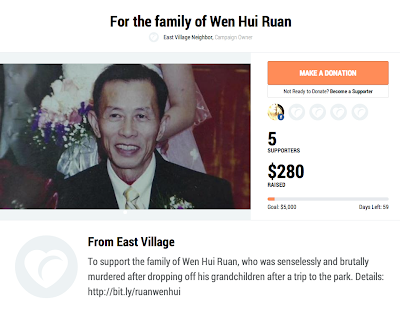 An East Village resident, with the blessing of Wen Hui Ruan's daughters, has launched an online fundraiser for the family.

All proceed's go to the family to help with expenses after the 68-year-old Ruan died following a vicious attack on East Sixth Street on May 9.

According to The New York Times on May 12, Ruan worked for two decades manning an iron at a garment factory. He would send money home to his younger brothers so that his nephews could attend college. "He was always eager to help everybody, anybody," Michelle Ruan said. "Always smiling."

You may find the Fundly site here.

Police arrested 20-year-old Jamie Pugh last week. He has been charged with second-degree murder, robbery and assault.
Posted by Grieve at 5:26 AM