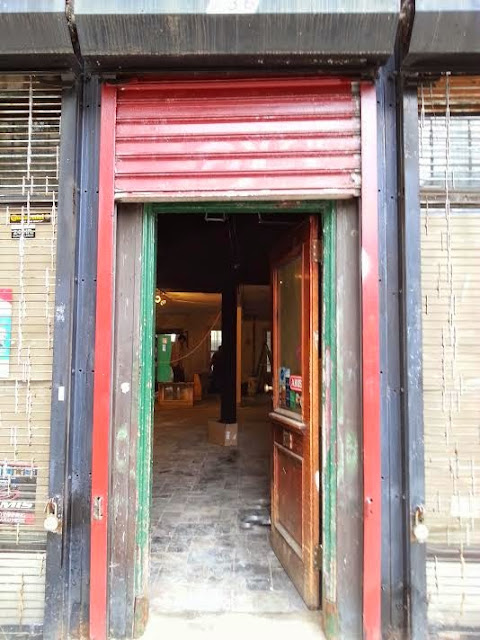 As you likely know St. Mark's Bookshop will be on the move to 136 E. Third St. just west of Avenue A later this year... the rent-challenged store reportedly officially signed the lease last week.

Meanwhile, there has been activity inside No. 136, as the above photo by EVG reader Yenta Laureate shows.

As the Times reported, the new store will be half the size of the current one, but the rent of $6,000 is barely one-quarter of the $23,500 charged by their landlord on Third Avenue, the Cooper Union.

According to the DOB permits, $36,500 is the estimated cost for renovations. On Friday night, the Bookshop wrapped up a successful crowdfunding campaign to raise money to finance the move.

Our @Indiegogo closed last night. Thanks for helping us raise $51,740 toward our move! http://t.co/7Wour7EH3C

The space at No. 136 previously housed Landmark Bicycles, who moved last year to the northwest corner of East Third and Avenue A.

Is this the new home for the St. Mark's Bookshop?
Posted by Grieve at 5:05 AM

Curious business model by this store it seems. Oh well, if people are willing to pony up then more power to them. I guess they earned all that goodwill.

Ok so non profits do fundraisers. Sometimes fundraisers are done for people who are sick or poor, but a for profit business? Ok once,we already did one fund raiser for them. More intellectuels signed their petition than any other petition having to do with saving our neighborhood. A fundraiser for renovations?! I'd like to do a fundraiser to wipe out my student loans. Take out a loan like everyone else. You are going to be paying so much less here. What chutzpah!

@anon 4:39 - Your sarcasm is misplaced: people have, in fact, done fundraisers to wipe out, or at least reduce, their student loans, and there's nothing preventing you from doing the same. You might want to hide the evidence of your level of education, though("intellectuels"? really?)

@ Dr. Gecko
Where did you get your doctorate at Argosy University. Creepy indeed.

@anon 6:46 - There are creepier things that Argosy. NYU, for instance.

I studied at NYU and bought all my books from St. Marks and I think they have a lotta nerve. I've always thought that they took their customers for granted. As far as I'm concerned they all stink. The New Museum, Cooper Union, NYU and St. Marks Books. Student debt needs to be wiped out. StudentDebtCrisis.org.

I remember when St Marks Books was actually ON St. Marks Place, right under my staircase, would give anything for it to be back there, instead of another smelly restaurant.