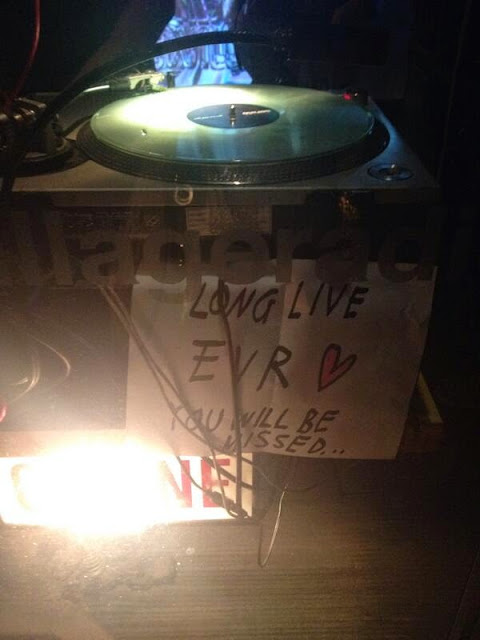 East Village Radio wrapped up its 11-year run just before midnight last night by playing "You Can't Put Your Arms Around A Memory" by Johnny Thunders … an appropriate song from the former New York Doll, Heartbreaker, one-time East Village native and subject of a new documentary …

East Village Radio reached out to listeners via Facebook and Twitter for suggestions of the last song … that wrapped up a four-hour sign-off party from the station's tiny First Avenue studio.

EVG reader Double U asked this in the comments of our earlier post:

Anyone recorded the final EVR hour?
Anyone who wants to share this historic recording?

Meanwhile, according to the East Village Facebook page, the station WILL NOT host any audio links to archived programming from the EVR website after this weekend. As they say, "Please follow/like your favorite DJs/show hosts for information on their archived EVR shows."

With various licensing fees, East Village Radio could no longer break even. CEO Frank Prisinzano made the difficult decision to shut down the station earlier this month, as we first reported.

I would like to thank the #eastvillage for being a place where something like EVR could happily exist. #RIPEVR east village radio
— Frank Prisinzano (@TheUnknownChef) May 24, 2014

Animal NY has an account of the station's last minutes here.

Previously on EV Grieve:
Exclusive: East Village Radio is signing off after 11 years; final day of broadcasting is May 23

On the phone with Sylvain Sylvain of the New York Dolls
Posted by Grieve at 7:34 AM

...under the Congressional Digital Music Copyright Act of 1998, Internet broadcasters must pay a digital performance royalty for every listener.

"We pay a higher rate for royalties and licensing than Pandora pays. We live in a world where these behemouth music-streaming services keep going in for more capital," said Peter Ferraro, the general manager/head of programming at East Village Radio.

is true? How is Pandora (and other streaming services) not 'broadcast'?

And what did he mean by "going in for more capital"?

We need a pirate Internet radio station! Is that even possible?

Bueller? Bueller? Still wondering about this business about streaming not being broadcast.

I can't believe it. This is terrible. Really terrible. I love EVR and I love Chances with wolves. Streaming radio saves me at work... What to do now!!!!

So sad to see so many stores, biutiques are closing in EV.
In a couple years, E. Village will have no characters whatsoevee.
Also, Fialka Vintage store is closed after 28 years at 9th st.