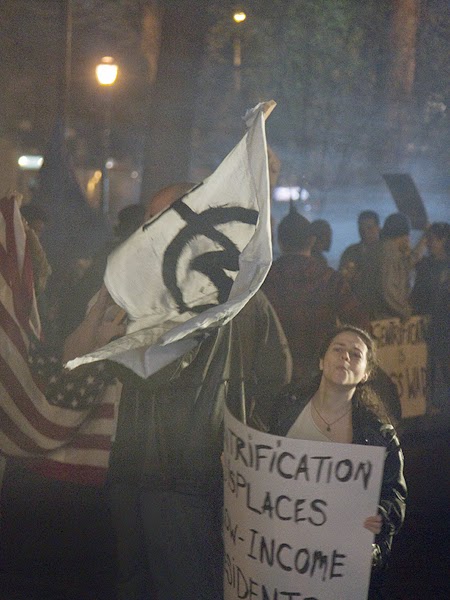 [Photo from May 1 by Michael Donovan]

Back on May 1, filmmakers Shari Springer Berman and Robert Pulcini recreated the Tompkins Square Park riots of 1988 for their low-budget adaption of the Eleanor Henderson novel "Ten Thousand Saints." (Read more about the film, due next year, right here.)

Ada Calhoun, who grew up on St. Mark's Place, was 13 in 1988 ... and she was one of the curious onlookers watching the reenactment on May 1. Today at The New Yorker, she shares some thoughts on the filming ... as well as of those who worked as extras on the set.

One man in the gaggle looked more convincing than the others. He was wearing a jacket with a logo for the eighties hardcore band Sheer Terror, and a backward black baseball cap. He had neck and face tattoos, including one that read “Queens” in elaborate script, and two teardrop tattoos under one eye. He identified himself as Danny Diablo, a hardcore musician and native New Yorker who lived near the park at the time of the riots.

“No way,” he said, when asked if he took part in the original riots. “I was a hardcore kid. I didn’t care about politics. My friends are drinking at a bar by here. I hope they don’t come and give me a hard time for doing this.” Asked what the sign he carried said, he appeared embarrassed. It compared Mayor Ed Koch to Hitler. “I actually love Ed Koch,” he said. Next to Diablo, a longhaired man wearing a heavy black leather jacket with fringe chimed in, “Why am I in this jacket? Isn’t it supposed to be August?” He shrugged. He’d answered a casting call. He was just going to go with it.

Read the whole article here (which includes an EVG shout-out).

Another 'riot' in Tompkins Square Park, this time for the cameras
Posted by Grieve at 3:05 PM

Some friends of mine who lived on East 7th street were prevented from entering their buildings by the goons on horseback, who kept reversing their shields.

Ahh, grasshopper....this may open up a fame vortex from which you may never recover......


......or WE may never recover if this spurs on paywall dreams again.

I'm not sure anyone was carrying signs at the Tompkins Square riot. It wasn't a planned rally or anything like that, just a rookie cop who asked for back-up from the entire city and all the coverging cops convinced everyone that something was up so the bar and club-goers all poured into the streets and that was the riot ....but I'm sure whatever actually happened has to be subordinated to the needs of the movie script.

Haha Danny Diablo was in Crown of Thornz back in the day. NYHC. Funny that he was an extra here.