Should you be worried about sidewalk sheds? 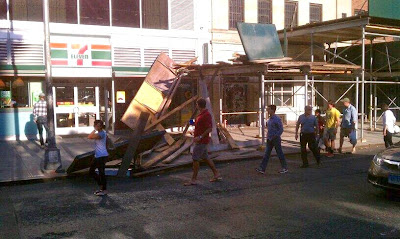 On Sunday, the just-installed sidewalk shed collapsed outside the Salvation Army's former East Village Residence on the Bowery at East Third Street. No one was injured.

The incident prompted a discussion about the safety of sidewalk bridges among a few EVG friends and readers. One EVG reader pointed us to a article from Friday in The New York World, which the Columbia Journalism School publishes, titled "Shoddy sidewalk sheds pose risk amid faltering city enforcement efforts."

According to the paper's investigation:

● A special Scaffold Safety Team, created in late 2007 by the Bloomberg administration to monitor construction scaffolds and sidewalks sheds, has seen its staff reduced from 14 field inspectors in 2008 to 9 in 2013.
● The number of violations issued for faulty sheds has plummeted, from 855 in 2009 to 337 in 2013.
● At least 39 pedestrians and construction workers have been injured since January 2011 in accidents involving sidewalk sheds

You can find stats and the city's response in the article here.

Meanwhile, here's Richard Miller, a structural engineer and owner of MRES Engineering PC, a private consulting firm: "I always cross the street to avoid walking under sheds. And I recommend others do the same."
Posted by Grieve at 5:00 AM

This shed did not collapse on it's own. Along with about 50 other people who were having brunch at the Bowery Hotel, I witnessed a dark yellow box truck with graffiti on the back drive into it which is why it collapsed. The truck then ran the light at 4th street and continued North up Third Ave, running the next light as well. I didn't get a pic of the event, but there were plenty of people taking videos and calling 911, etc.

I don't even trust the construction work that goes into buildings today let alone the sidewalk sheds. I avoid walking under them. It might be a small risk but it isn't work it to take the chance when you can easily avoid them.

Walking out the front door is inherently risky no matter where you live. In New York City that risk is a lot higher. Sometimes you just have to put your life in someone else's hands when you ride a train, or an elevator even. But outside of those situations, treat any NY street situation as a potentially hazardous one. A sidewalk shed just fell last week in our neighborhood, so the answer is DUH, yes we do need to recognize the risk of falling sidewalk sheds. Window AC units too.