Epilogue from the Cadillac with the Tiger in it 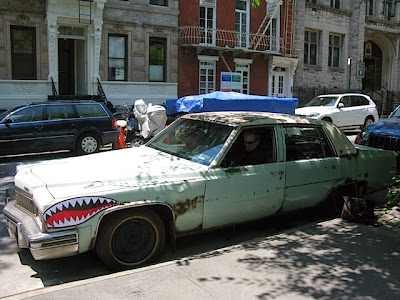 Sadly, as you know, the 1978 Cadillac Sedan Deville — aka, the Cadillac with the Tiger in it — has left its 22-year-home on East Second Street. Ernest, who works nearby as a custodian, is the proud new owner of the car and has it in a different borough.

Several readers/residents have asked about the status of the Cadillac with the Tiger. Here you go.

Hello and thanks to all of you who attended our farewell gathering on June 7 and/or have inquired about our well-being.

The Tiger and I are in the capable hands of Ernest. He's young and filled with inspiration. He reveres and respects us. During the last month the Tiger and I have had a chance to rest and reflect on the 22 years we spent in the neighborhood and ponder the question: What did we mean to you all?

Were we a nuisance? Was I a rusty, pock-marked eyesore whose noisy engine and fumes were out of step with the "new" East Village? Or were we old friends who welcomed you each day and made you smile and evoked in you a sense of wonder? 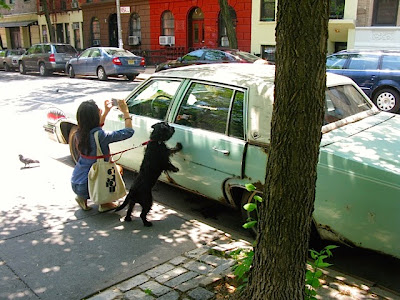 Truth be told, one's actions and thoughts reflect a lot about themselves. Those in the nuisance camp are probably the same self-entitled folks who don't say "thank you" when you hold the door open for them or who run the red lights on their Citi Bikes and nearly mow down the pedestrians who have the right of way. The Tiger and I actually feel sorry for those in the nuisance camp.

But the announcing of our farewell showed us that we had many more friends than foes.

Like the Second Avenue gas station manager from Ghana who said that he grew up and became a man during the years he knew me — as he ponders his next job because his gas station closed down recently and yet another high rise will take its place.

Or the Egyptian deli worker who told my owner to keep me because I would be a valued antique car in his country —which he may soon have to return to when his deli's 30-year lease ends next year.

Or the car repair shop owner on Attorney Street who said that I was a classic car and it was a damn shame my owner couldn't keep me in the neighborhood. That same shop owner pisses off the real-estate speculators (who hound him daily to sell his building) when he tells them to get lost — that he loves his work and is loyal to his older workers and no amount of money will persuade him to sell his building and close down his shop. (Quite a rare, remarkable guy he is don't you think?)

Nor do we have to look further than our own block to find our good friend Camille — she yelled at the frat boys who shoved a table under me that tore off my exhaust system a couple of years back.

Her landlord took her to court to remove her from the apartment she shared with her 93-year-old mother for over six decades until her mother died last year. Camille fought valiantly to keep the apartment — until two malignant tumors where discovered in her brain in March. Weakened by chemotherapy and stressed out by her housing court case she has decided to give up her lifelong home and move in with her boyfriend in Pennsylvania.

I don't begrudge her decision. The Tiger and I stayed as long as we could but we decided to move on, too.

We were tired and had been having trouble keeping up. The rapidity with which the East Village is changing exceeds the cruise limit on my speedometer. The greedy developers and the city are turning the neighborhood into a giant shopping and entertainment complex.

When they're done, they will have succeeded in turning every block from Delancey to 14th Street into a soulless glut of high-rise luxury condos and mega-stores making it indistinguishable from any other such Manhattan block.

But ultimately it will be their loss. No amount of dollars will buy them the rich, cultural and multi-ethnic heritage of the Lower East Side.

Parting thoughts from me and the tiger?

We — the former and current residents of the neighborhood — are outnumbered. We might win some battles but we're going to lose the war.

We're losing as many old time Mom & Pop stores in the East Village each month as the country is losing World War II veterans.

But never let the interlopers crush your spirit. Stay as long as you can. Like Pete and Sandy did. Like Camille did. Like the Tiger and I did. Remind them that you're still here. It will annoy the hell out of them. And maybe some good will come out of it. Maybe some in the nuisance camp will grow up and say "thank you" when someone holds the door for them and appreciate what the old neighborhood has to offer before it disappears. And you should all say "thank you for sticking around as long as you did" to the small business owners who are closing up shop.
And if and when you decide to leave, try to do it on your own terms

The Tiger and I saw and were moved by the spirit of all of our friends and well-wishers on EV Grieve and those who came to say farewell over the last few weeks. And in return we hope that even if you don't believe in magic maybe for a brief moment in the midst of all this mayhem, an old rusting car and a stuffed animal brought something magical into your life on East 2nd Street.

Also! The Cadillac with the Tiger in it now has its on website. Find that here. 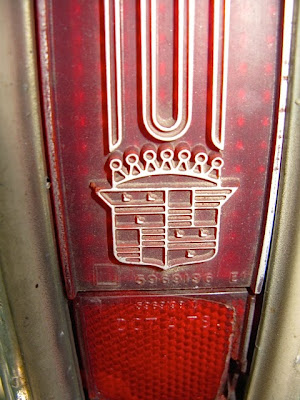 that was very eloquently written for a car. made me cry.

Beautiful & poignant. Just like what's left of our LES.