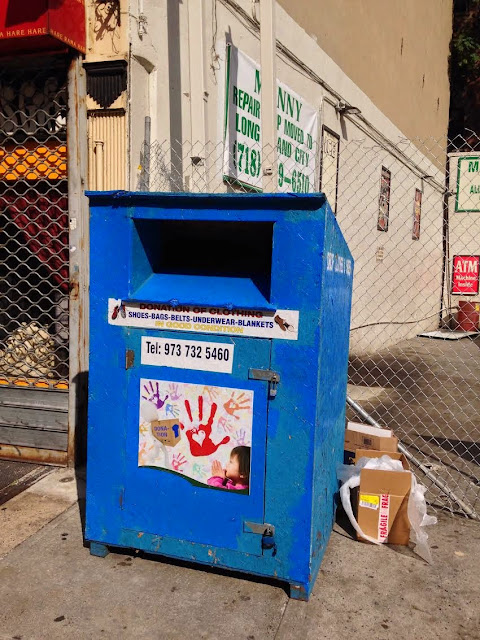 Well, just as the city was removing those illegal sketchy pink boxes that recently arrived around the neighborhood … here comes a sketchy blue box on Second Avenue near East First Street where the BP station was.

The MO is the same: Organizations place the boxes near or on vacated properties, making it less likely that the owners would call the city for removal. The number on the box goes to a full voice-mail box at Viltex, the for-profit New Jersey-based company who resells the donated goods to other clothing vendors as well as to companies that use the materials to make rags, as DNAinfo reported.

Here's the Times from July 6 with more on the uptick of these boxes all over NYC.

City law bans such bins from being placed on sidewalks and streets; they are legal on private property with the consent of the owner. Once found by Sanitation Department enforcement officers or reported by residents to the city’s 311 help line, an illegal bin is tagged and the owner has 30 days to remove it. Summonses are not issued, a department spokeswoman explained, based on the theory that those distributing the bins have factored any fines into the cost of doing business.

And one downside to the proliferation of the for-profit boxes.

A similar pattern has emerged nationally, according to officials at leading charities. They are alarmed by the misleading competition, which, they maintain, is undermining their own efforts.

“These dark-of-night property violators have proliferated nationwide,” said Jim Gibbons, the president and chief executive of Goodwill Industries International Inc. “They use a charitable veneer then extract the value for their business, versus the Salvation Army or St. Vincent de Paul, where the value is distributed in a more thoughtful way throughout the community.”

You can report the boxes to the city here. And did anyone happen to see any other of the blue donation boxes around…?

Previously on EV Grieve:
About those new sketchy pink boxes around the East Village

The sketchy pink boxes are going away
Posted by Grieve at 5:17 AM

How heavy are they? Someone help me move one in to a parking spot in the street to see if it'll get taken away faster that way?

I live in the Bronx and we have a light pink box in the grocery store parking lot that looks identical to that blue box.

"Summonses are not issued, a department spokeswoman explained, based on the theory that those distributing the bins have factored any fines into the cost of doing business."

What the fuck? So even just out of principle they're not getting fined? At least cut into their profits even if it's negligible and show that what they are doing is illegal. Ridiculous.

next comes the liquor license application.

9:07. I think what they mean is they are not given summonses, rather they are I ust given fines as they won't fight it. But I think they should also get summonses, they should have to waste a day of their life and pay court costs.

But, this is a major assumption.

Just "to pair" with the recyclables!

I can't for the life of me figure out how this "Business Model" actually works. Seems like a ton of heavy work/illegal activity for a bunch of, sometimes literally, crap. There HAS to be a better way to scam :).

Just to be clear, the blue boxes are to donate the stolen CitiBikes that are piling up everywhere. The pink boxes are for everything else.

@Giovanni - not quite. The pink boxes are for medical waste. But the blue boxes will accept medical waste as well, provided it is politely labeled.

As usual, a little politeness goes a long way.

Slap a Citi® logo in there and under Bloomberg's reign, then it's ok for these CitiBoxes® to take public spaces for the benefit of humanity and environment -- no carbon being emitted here -- thus you are making a difference and improving your overall well-being.

Thanks for clearing that up Dr Gecko, I would not like to dispose of my medical waste improperly, that wouldn't be very polite. Now that we have these handy bins on every corner I guess I can stop leaving my medical waste behind in a brown paper bag on the M8 crosstown bus and in Starbucks bathrooms.

if i factor in the cost, does that mean i can bypass a summons for speeding/open container/turnstile hopping etc? inquiring minds would like to know.

I have a huge garbage bag of old H&M sweaters and old jeans I need to get rid of, and I would much rather give them to these people than to throw them away in the trash. Thanks

You can donate to Goodwill at 220 E. 23rd Street (between 2nd and 3rd avenues). Or to Housing Works through re-fashioNYC if there's a box *in your building* or at any of these locations: http://www.housingworks.org/donate/drop-off-donations/
And, too, there's the clothing recycling program at all the greenmarkets: check this page out http://www.grownyc.org/clothing They sort things and literally take all fabrics. They are at the Sunday Tompkins Square greenmarket.

You can take clothing and shoes to the Huntington House, 347 East 10th Street ... on the northeast corner at Avenue B... a place for women coming out of the prison system to reunite with their children... I usually take stuff here,

@7:51 or you can bring them to the Salvation Army at 11th Street and 4th Ave! That's where I'm going today with my clothes donations.

I'm Anonymous 10:01AM (just before this comment). We got back from donating my clothes at Salvation Army about an hour ago. Easy peasy. Do it, 7:51!

The same salvation army that sold a building next to the bowery mission to a hotel developer? Screw them go to Bowery mission directly - or the NYC rescue mission people in need will be helped directly -

Anon 11:00PM, yeah, I don't think the guys at the Bowery Mission would have fit into my pink work blouse or size 8 ladies' jeans. Although they MAY have liked the Carlos Castaneda books I dropped off as well.

A pink box keeps reappearing on 6th Street between C & D in front of an abandoned lot--or it looks abandoned to me. As soon as the city hauls them away another is dropped in its place.