Prima closes, and offers 1 of the most refreshingly honest reasons why 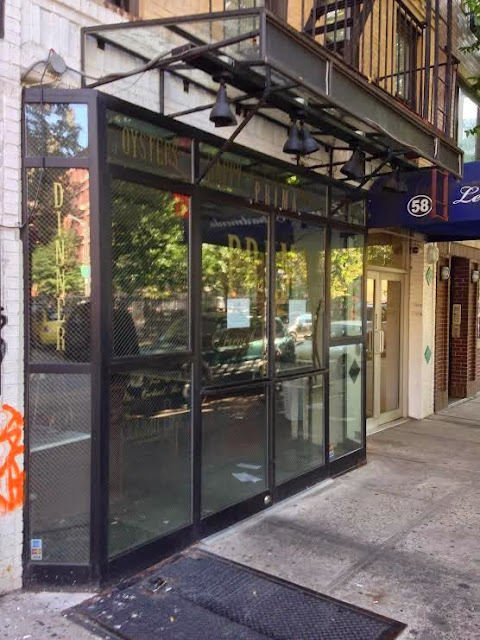 Prima, the well-regard restaurant at 58 E. First St. between First Avenue and Second Avenue, has closed.

The sign on the door is as straightforward as it gets. 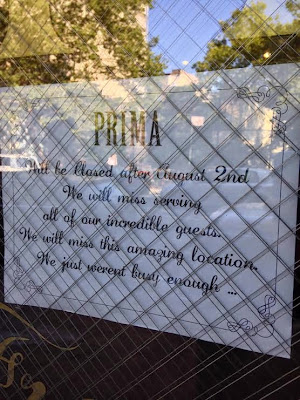 Prima opened in November 2011 (in the space that housed The Elephant for 17 years).

Prima, from the owners of Summit Bar on Avenue C, was originally open mornings starting at 8 for coffee (via 9th Street Espresso) and a light breakfast … and small meals throughout the day.

But that never caught on. The Times stopped by in April 2012 and had nice things to say. "Order the arctic char ($18) ... and you’ll receive a generous serving of fish cooked so that the skin is as crispy as crackling, the flesh flaky and succulent. It’s flawless, a master class in fish."

We knew several people who liked Prima because it was always pretty low-key. But apparently word-of-mouth was at a minimum.

Per New York magazine: "Prima is the kind of neighborhood gem you hope nobody hears about, so you can keep it your little secret."
Posted by Grieve at 5:00 AM

Too bad, I really liked this place.

Starz had a free preview this weekend and I stumbled upon this indie flick, Failing Better Now, released in 2009, and per IMDB: A coming-of-age-at-thirty, offbeat comedy about a flaky writer who loses her sister's cat and falls for the aspiring rockstar who joins her on a wild search in the East Village.

The movie has shots/scenes of the EV and LES neighborhoods of five years ago — in and around TSP, such as: a glimpse of Flea Market Bistro, the old Ninos, the community gardens, interior and exterior shots of Bua and Fat Baby, empty lots that are now condos, street murals on boarded abandoned buildings or vacant storefronts, etc. Some of the neighborhoods weren't accurately depicted though, such as the boutique Roni (now closed and was in Mulberry St.) was shown as being across Bua.

Anyway, there was a scene where they were having coffee/brunch at The Elephant, hence posting this comment here. As for the film, not gonna comment on it except that it's a good time capsule of what was EV like ~5+ years ago, including the technology — people only had flip phones and not phablets or smartphones, thus the absence of the iZombies; The neighborhood seemed quieter and it was almost quaint; it feels as if it was just both yesterday and from a distant past. Memories. As always, I digress.

Thanks esquared™ ... not familiar with that film — will look it up...

esquared™ brings up an interesting point; almost no one had camera phones just a few years ago, the iphone is just 7 years old, but now everyone does, hence millions more pictures and videos of all the places that will surely soon disappear now exist, all
posted to Instagram and Facebook and elsewhere.

This generation will have a much better memory and record of all the places they will soon be losing, and now their favorite memories and places they spent time in are all being wiped out by hyper gentrification.

Maybe this will make them more aware of the problem, maybe they will even do something about it. Or maybe they will accept it as the norm, as memories become as disposable and temporary as digital media.

Just five years ago we still had three of my favorite places, the Amato Opera, Love Saves The Day, and H&H Bagels. The world is not better without them in it.

Agree with esquared™
the neighborhood was a lot quieter even 5 years ago. Those that use the excuse "the EV has always been wild, party central, etc..." are wrong. When I moved back here after living in Chelsea for 9 nears I couldn't believe how good a sleep I could get, even on weekends.
Descent places that do not cater frat-soro-types are feeling the pinch since adults don't bother to eat out any longer.

I guess they were never interested in answering the question? why were they not busy? fish sandwich - $18, cheese burger $14.50. Ya don't have to be a genius to figure out the place was just too expensive to be busy. Probably serves them right.

I really really miss The Elephant now. I discovered it too late during their final year. Never understood why it had to disappear.

Giovanni, only a glimpse of the neighborhood will be seen in these smart phone pictures, 99% will be selfies.

Ate here a few times when family has come to visit. Food was always excellent, some of the better fish I've had around here. Bummer.

Well, it's called Elephant's Revenge. The Elephant was one of the most quintessential EV restaurants in the early 80's. Then someone moved in offering more rent, and now they've become victims themselves. C'est la vie. I still miss The Elephant. Never went to what came after.

Some of the nicest people in the hood. Sorry to see them go.

Why do people have to be snarky about a business closing??? It's hard enough to maintain a small business in this city without some asshole kicking them when they are down. This neighborhood in the past 2 years has dramatically changed for the worse. There is no more neighborhood anymore, nobody is out after 10pm on the weeknights. We really are "Murray Hill South." CB3 has made it impossible for somebody to run a good shop because of the many bad eggs out there. The Frat and Sororosluts run things now and some clowns on here kick a place and their owners while they're down. In the immortal words of Al Goldstein, "FUCK YOU!" Go try to do a small business yourself bitch, before you criticize or negatively Yelp them! I wish small business owners could have a Yelp-type thing (dont want to give that awful, extortionist shitshow Yelp any cred) for all of the douchebag customers that we have to deal with and pretend that we actually like them. In the old East Village, if you were an asshole or disrespectful, you got treated as such and were happy that you'd never come back! So a decent business closed, have some fucking class! This place went out with dignity. Too many great places are closing to the dismay of many real NYers while this new breed of 20somethings could give a good shit before they move to suburbia and embrace the mediocrity that they are! Somebody please save NYC! It is beginning to suck!

Beginning to suck? We're pretty much there.

We have other problems - did you see the shutdown of 2nd Ave yesterday? that was a test, the plan is to host the DNC here and keep the Avenue closed the entire week. . There is no end to their arrogance.

nygrump, I saw that test yesterday, it was amazing, and it was all a demonstration to show the DNC organizers how quickly they could go from a hotel in midtown to the Barclays Center. Imagine the traffic if they do this for a whole week? Chris Christie couldn't come up with a better plan to snarl traffic if he tried.

Here's the deal: since there are almost no hotels in downtown Brooklyn, and not enough people dressed like Elmo or naked Statues of Liberty, the city plans to shut down 2nd Avenue and many other side streets just so delegates can stay as close to the Times Square shit show as possible and then zip out to Brooklyn in under 15 minutes.

They closed down streets from the Palace Hotel on Madison Ave, across 52nd St, all the way down 2nd Ave, over the Brooklyn Bridge to the Barclays center. They made the busses turn off of the avenue, inconveniencing everyone on that line. They could have just let the busses through since they had every other lane of traffic open for a small convoy, but no, they had to force people, many elderly and in wheelchairs, over to Lexington or 3rd Avenue.

At first everyone thought it was for Obama or Biden or Cuomo, but it was just a test to show how easy it is to get to Brooklyn from Midtown when you push all the busses, cabs and little people aside. Outrageous.

It's bad enough uptown with the 2nd Avenue Subway construction, now they want to shut the rest of it down.

Everyone needs to be.patient. Give the deblaso regime some time. Soon crime will begin to rise. There will be some horrific high profile crimes and the bros and their ilk will be gone. You can't erase 20 years of changes in a few months. By the time deblasio.is running for reelection this will be a very different town. He will get votes for crime increases and driving away tourists. Be patient.