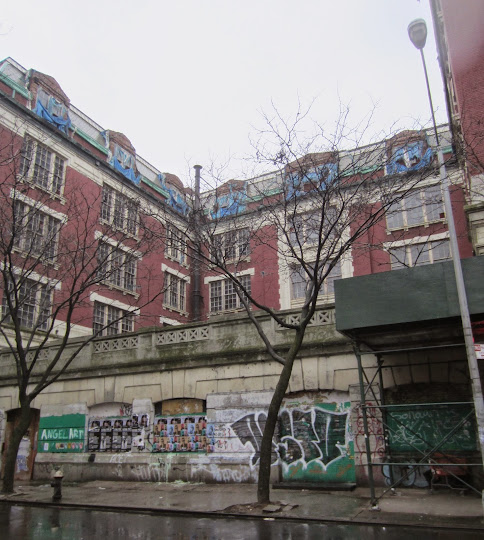 A few updates about the former PS 64 and CHARAS/El Bohio community center on East Ninth Street.

Back in September, the Department of Buildings put a stop, for now, to developer Gregg Singer's plans to convert the long-emtpy building between Avenue B and Avenue C into a dorm.

We need to bring back the building for community use and ensure that our history is not forgotten or erased. Our community still needs this building for engaging in the arts, educating each other of our history, and providing social programs for the children, young people, adults, and seniors that make up this beautiful neighborhood.

We’re asking Mayor Bill de Blasio to use his power to undue an injustice perpetrated by Mayor Guiliani and listen to the Lower East Side/East Village community by returning this building for community use.

You can find the petition here.

Meanwhile, the grassroots organization SOCCC (Save Our Charas Community Center) has been collecting holiday cards from neighbors to deliver to Mayor de Blasio in person on Tuesday (Three Kings Day). Find out more details about this here.

Finally, the sidewalk bridge on East 10th Street is celebrating its 17th month with expired permits… 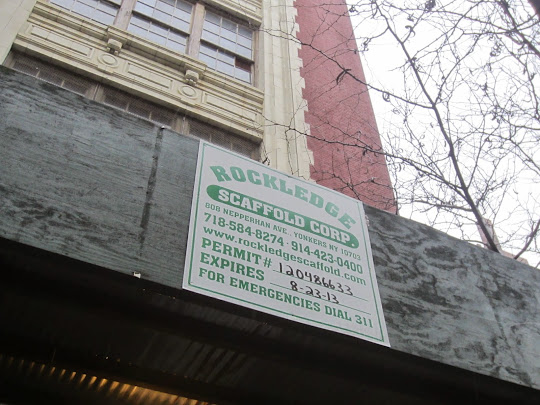 Previously on EV Grieve:
Testimony Of Councilmember Rosie Mendez regarding the former PS 64

'Misinformation' cited as DOB issues Stop Work Order at the former PS 64; community meeting set for Sunday afternoon
Posted by Grieve at 5:11 AM

Please. Anything but a dorm. The student ratio in the community is at an all time high. Nothing against them but the whole East Village feels like a college campus.

Does the developer own the building? What exactly can the mayor legally do about this situation? Is there a real world legal solution or will the place sit just empty for several more years?

this property should NEVER have been sold to a developer, but Giuliani did so at the behest of his buddy Antonio Pagan, who HATED the group that held the lease on the place with the city.

Singer's plan is to WAIT OUT all of his opponents, including area residents and local politicians, and he can afford to, as his real money comes from other real estate projects.

Obscenely, that prick can use the "depreciation" of this property as a tax write-off AND the property continues to escalate in value in this hyper-inflated market, even as it crumbles through neglect.

No one wants a dorm or high rise but there was nothing illegal or unethical about the developer buying the site. Charas didn't pay their taxes & lost the building. I'm all for a non profit using it as a community center but Charas should not be the forerunner by default to take it over should that happen. The only time I ever hear their name is in relation to this building. Do they even exist as an active nonprofit ?

@9:05pm: Ah, but that building was sold WITH A RESTRICTION in place that Singer was well aware of. And he's spent all these years trying to weasel out of it, but he bought the place with *full* knowledge of it.

So I have zero sympathy for Mr. Singer; he strikes me as a crazy person with a lot of money, that's all. He is not part of the community and he has no use for anyone who actually lives here.

@10:28 OP here. I'm not defending Stringer. He does indeed have to use it as a community space. I'm just saying that it shouldn't necessarily be returned to Charas if they can't afford to pay the taxes. There are other organizations that can use the space as well and may be better financially managed.

Charas was renting the building for 20+ years from the city for $200 per month -- there was no responsibility for paying taxes on a city-owned property.

That being said, the Charas group SHOULD have and COULD have done a lot more with that amazing community resource vs using it as a private club house that they made accessible only when the man was at the door. (Too little too late.)

This property should be re-taken by the city and restored for use as the public school it once was.

As Singer received a GUARANTEE from the city when he made his purchase (UNHEARD OF in sales of city-owned properties!!), he would lose NOTHING if the city took this property back....

How does the city 're-take' this if it is private property? Do they buy it back for some outrageous sum and give it to some politically connected 'community' group? Is this the process?

Anonymous 12:43: The city could negate the sale (whatever the term is) for any number of reasons, not the least of which was the manner by which the property was "sold" to him by the Giuliani administration, or it could use "eminent domain" to take it back from him and pay back whatever he's paid so far.

That building was built as a SCHOOL and a school is sorely needed there....

Conditions of the sale said singer had to develop it according to the community use standards in :"a timely manner" . Vague but I'd say time has run out on that. In the meantime he's done what he can to weasel out of terms of the lease/sale.

Anonymous 1L43: Sounds like grounds for a DEFAULT proceeding to me.

What the fuck is the city waiting for???? Every minute that parasite holds title, the more the building deteriorates. Singer would just LOVE to have the property condemned, tear it down and replace it with some "luxury rental" monstrosity.