Plywood wraps itself around the incoming Suffolk Arms 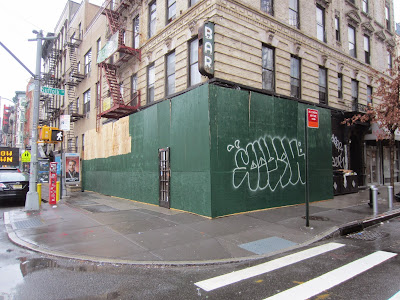 Just noting the recent arrival of the plywood around the long-vacant 269 E. Houston St. storefront at Suffolk.

As The New York Times first noted back in September, the new venture is Suffolk Arms, a cocktail bar from Giuseppe Gonzalez, "whose bartending credits include Golden Cadillac, PKNY and Dutch Kills."

According to the Times, "Expect an English pub exterior but a New York feel inside."

Several other suitors kicked the tires on the space to no avail.

The last tenant here was The Local 269, which never reopened in the fall of 2012 after a flood apparently KO'd much of the live music venue's equipment. The Local 269 space was previously home to Meow Mix and Vasmay Lounge. The Local opened in February 2009.
Posted by Grieve at 4:59 AM

Giuseppe makes amazing drinks, can't wait for this to open.

I believe this building sold recently as well.

Blaaaaaaaahhhhhhh. I know we're supposed to get excited about mixologists and cocktail artisans and such, but all this shit is completely boring to me at this point.

Can you note the LACK of a liquor license application!

What's the difference between a bartender and a mixologist?

an English pub INTERIOR would be better

if you're not into mixologists go have a pbr at your shitty dive bar. no one cares.