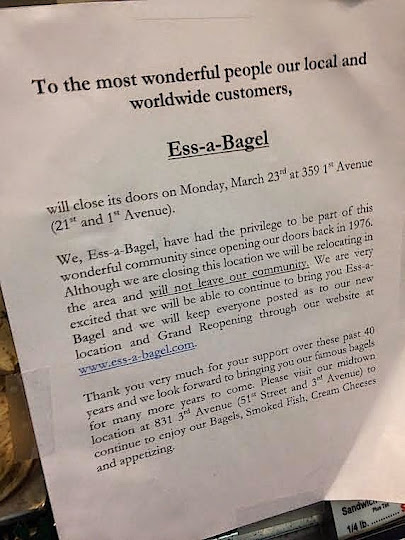 You have until Sunday to stop by the bagel shop just a little north of here on First Avenue at East 21st Street. Ess-A-Bagel will be closed starting on March 23, per a note on display for customers inside the shop.

As the Town & Village Blog first reported on Jan. 16, Ess-a-Bagel was being forced out of its longtime home. However, according to a statement that the landlord's reps sent us, Ess-A-Bagel’s owners "repeatedly refused to meet us between their below-market rent and current market value."

The note to customers emphasizes that they will not be leaving the area ... with a Grand Reopening coming at an undisclosed location.

No word yet where the new Ess-A-Bagel might be… The former home of The Frenchmen is apparently a possibility, according to a tipster.

Meanwhile, Ess-A-Bagel fans are leaving notes on the wall... 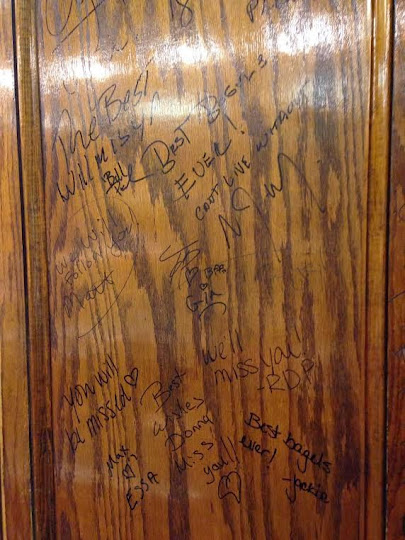 Previously on EV Grieve:
[Updated] Report: Landlord forcing Ess-a-Bagel from its longtime home (46 comments)
Posted by Grieve at 7:27 AM

Hopefully they move a little further south than "down the block." We are severely underserved in terms of bagel shops down here.

Won't the bagelteria opening at the former DeRobertis space make up for this? There will be a bagel gap, but I'm just saying.

I was so excited to be within an easy walk to Ess-a when I moved back to NYC 2 years ago. But too many mornings of poor service/poor selection turned me sour on the place. I'd get there at 8am on a Saturday and be told all they had were pumpernickel and onion. The place would jam with people waiting 10, sometimes 15 minutes for a freakin' sesame bagel. As good as they were/are it was not worth the hassle.
-Sal C

Hopefully the new space will be a little more logical. Love their bagels but the thought of trying to navigate that place on a weekend morning, shudder to think of it. Inhumane.

The deal with the old Frenchmen space fell through. I heard there were looking somewhere just up 1st Ave. #SaveNYC

Agree with 11:07 and 11:41, it was generally not pleasant to do business there, unfortunately.

They also have a strict no-toasting policy, which seems kind of dumb. They would actually say, "if you want toasted, go down the avenue to David's or Bagel Boss."

So we have basically just a few more days to go to Mitali, Ess-A -Bagel, and Puebla Mexican, and maybe a few weeks for Kabin before they all close. But not to worry, you can get to LA in a U-Haul just in time for wildfire season.

Have to say, this brings tears to my eyes. Kids know Essa, friends, relatives from across the globe. What a pity and a shame that our city will be 75% banks, 7 11s and CVS chains very soon.

8:42pm I toast bagels and I'm from NYC born and raised. Sometimes I don't.

Yes, many humans sometimes enjoy bagels toasted, and sometimes not.

The craving for a well-done edge and crackly warmth overall, accompanied by a lovely effect on the cream cheese, does not make one a less valid person or New Yorker.

Speed is a bonafide NYC value, which is probably why they didn't toast.

I always assumed the no-toast policy was an idealistic one. When the ess-a-bagels are fresh out of the oven, toasting would be gilding the lily, totally pointless. But when not oven fresh, they are enhanced greatly by a little toasting, no sane person could dispute that. But yeah, it's probably a speed issue. Imagine the lines down the block if every jerkoff ordered a toasted bagel. Probably why they serve microwave eggs too. Eh, nobody's perfect.

Heartbreaking. Been going here since the early 80s. I've never had a problem with their service and if I had to wait for the sesames to finish baking, it just meant that after waiting I got the hottest freshest bagel possible - not a problem for me. Best bagels in NYC and therefore the world. Love you Essa! Please reopen soon. I'll be there.

They refused to toast bagels, and now they are toast. Coincidence? I thnk not.

If you want your bagel toasted the new Bank of America will be happy to give you a toaster when you open an account. Oh, wait, they don't do that anymore? Now they just steal from their customers? Oh, ok, that seems like an upgrade over one of the best bagel shops on the planet.