Out and About in the East Village, part 1 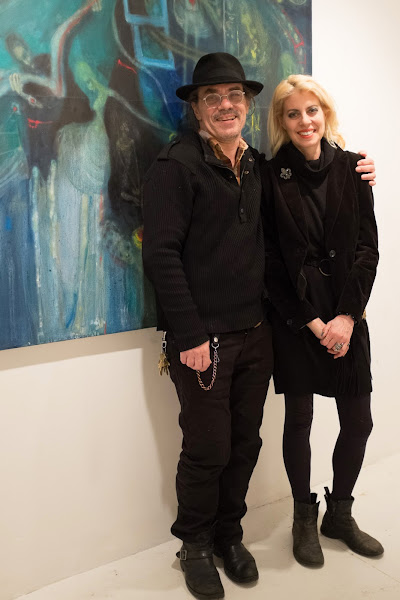 Regina: I’m from Howard Beach, Queens. I was an outsider there — no friends, just weird, not knowing why. There were no artists there. My mother was from Naples, Italy. My dad was Hungarian, Finnish, and from the Bronx and Harlem. They were just working-class people. I would say to my mother, ‘Where is everybody? Why is everybody inside? Even though I was a shy kid, I just felt like I didn’t belong there.

In high school I remember saying one thing and then kids going, ‘oh she’s weird.’ So I just got quiet, shy. I cut myself off. Back then there was obviously no Internet, so you were by yourself all of the time. Somehow I just got through school. I didn’t do well in school at all. I wasn’t a troublemaker, but I was just lost.

Charlie: I was born in Chicago in 1955. My dad was a civil service worker so it was almost like being an Army brat. He was working for the Army. For his first job we went over to Germany and I really kind of moved around a lot to different American communities. It was a pretty good time. It was middle class but the refrigerator was always full — prosperous. You didn’t really have to worry about anything. I was having a jolly old time with my friends.

We went back to Chicago and my dad lost his job after several years there. It was the same thing Regina was going through. I felt isolated. It was almost like the Howard Beach of Chicago — an Italian, Polish community. We kept moving and eventually my dad got another government job. We went over to some islands in the Pacific and I went to boarding school in Japan for awhile but I got kicked out. I was kind of a reckless kid. You were sort of free but you didn’t really think about it. Not really thinking about a career. The influence of the people of that time, the hippies, later the punks. Just living, seeing where it goes. I remember trying to go to college for a couple of months but I couldn’t sit still.

Regina: Right after high school, I was sitting on my front stoop and these two guys were walking through the neighborhood and covered with dirt. I grew up right next door to Aqueduct Racetrack, and they said, ‘We work with horses.’ ‘Horses? I love horses,’ never being around them, ‘They got girls down there?’ ‘Yeah, go to this barn and you can get a job as a hot walker. The barn was owned by Buddy Jacobson and his son and all the people working there were about my age. They taught me how to walk and feed the horses. I loved being around the horses. They felt like me, really nervous, high strung. I literally felt the ice cracking around my heart. I could be responsible for these young colts.

But the other thing was that I realized that people liked me for the first time. They were kind of outsiders too in a certain way. My first boyfriend was there, a little Puerto Rican kid, and my mom flipped out.

I would get up in the morning, spend all my time there, then come back. My mom called them bad people. She was very tough and very scary. At that time, when you were raised, we were beat a lot. I didn’t think that was so bad or unusual because everybody got that. But unlike the other Italian mothers in the neighborhood she didn’t know how to show her love for me. But she gave me a lot of her great strength as did my father and they both taught me to just get on with it and not to have self-pity.

At the track I also discovered books. One of the kids had "The Catcher in the Rye." I went home and read it, I just said, ‘Oh my god, this was written for me.’ That opened up the world for writers. If you don’t want to be alone, start reading. I started discovering Kerouac, Salinger, Henry Miller, Hermann Hesse, Eugene O’Neill, Tennessee Williams. That made life so much better, but I still didn’t think about being an artist or a writer.

Charlie: All kinds of crazy things happened, but I ended up in Los Angeles for a while with stronger and stronger feelings of wanting to find a life’s work. Really the only thing that made sense to me were the arts. I didn’t even know which one, but somehow I just drifted into acting and I got deeper into that. I always wanted to go to New York. It seemed like the most exciting place in the world to me. The films that were coming out of there in the 1970s — “Taxi Driver,” “Dog Day Afternoon” — I thought I belonged there. They had this service if you could deliver somebody’s car to New York, it’s a free ride. So I drove cross-country with a friend of mine to New York in this Cadillac.

I had gotten into painting in California — totally undisciplined, but not in the sense that you don’t work hard. You sort of dive in. As much as I liked acting, you’d get into some play and you didn’t even like it or the part and I just had no discipline or tolerance to wait that out. Our whole lives have been sort of the do-it-yourself. Even now. I just sort of dove in, not really trained to draw, but the image would come out of the paint. You’d keep doing it and doing it and doing it and exploring that.

Regina: I didn’t want to be at the track forever and I didn’t know what I was doing, so I left and took the A train to Manhattan and got a job at WABC Radio. I don’t know why I did that. The whole thing started again. I had no friends and they thought I was weird and I was so depressed. I missed being outside. I felt my soul shrinking.

Next week: "I had a job at Phebe’s and then at an all-night restaurant, where I met Charlie. I didn’t like him at first."

The exhibit Inner Cities continues through March 28 at 292 Gallery ... the exhibit features photos by Romy Ashby, drawings by Regina Bartkoff and paintings by Charles Schick. The gallery is at 292 E. Third St. between Avenue C and Avenue D. Gallery hours are 2-5 p.m. Saturdays and by appointment.
Posted by Grieve at 6:45 AM

They performed an unforgettable version of Medea back around 2001.

They are a fantastic couple, exuding good energy. The East Village is a better place for their presence.

I saw these two in The Two-Character Play, which was fantastic. I recommend everyone go see their performances.

For two misfit, punk-rock artists, they sure are... nice. Weirdly I think they are getting younger as the years go forward. Regina had never been more beautiful.

I just love James Maher's Out and About every week. Always such good work. Thanks Grieve and thanks James!

Another fantastic, interesting profile of people I am so pleased to get to know a bit and happy to have as neighbors, thank you.