Puebla Mexican Food is closing after 25 years on 1st Avenue 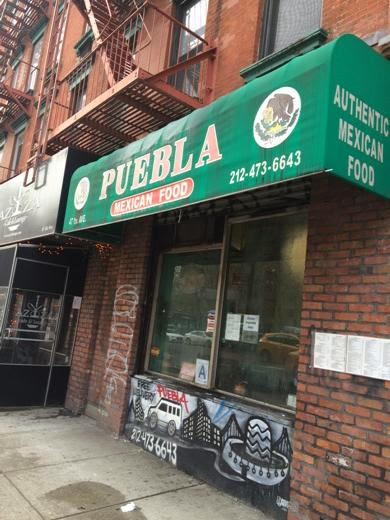 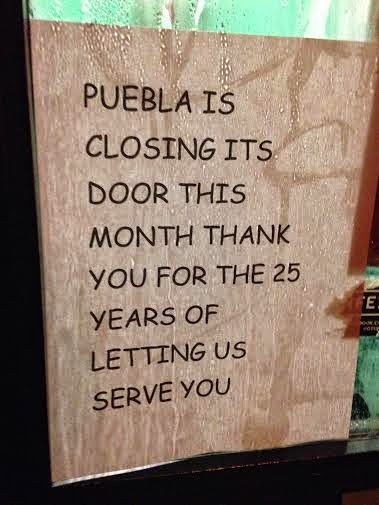 The family run restaurant closes after business this coming Sunday, March 15. March 23. We hear that the lease was up, and the new rent was too much for owner Irma Marin to manage. As for finding another storefront, there's nothing affordable nearby … plus we're told that Marin understandably wants to take a break. 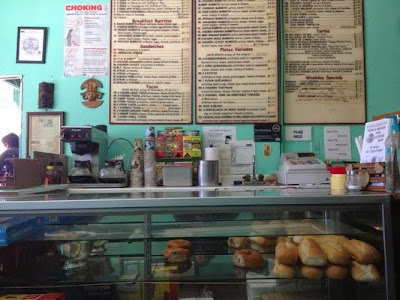 Back in February 2007, The Villager published a feature on Marin, who "was born into poverty in the town of Santana, in the central Mexican state of Puebla that their restaurant is named after."

She was one of 12 children. In 1979, at age 15, she left her parents and the world she knew behind to cross illegally into the United States. It was a last-minute decision. An older sister had backed out after the family had paid $550 per person to a coyote (an expert — or profiteer — at smuggling people across the border). The money could not be refunded and Marin took her sister’s spot, traveling with another sister, that sister’s husband and his brother.

The coyote led them on a five-hour hike over a Tijuana mountain into Southern California, using his familiarity with the route to avoid authorities. Marin and her small party eventually made it to Los Angeles, where they boarded a cross-country bus to New York City. Her sister and brother-in-law rented a tenement apartment in the East Village, and Marin lived with them. Her childhood and her formal education were over.

Over the next decade, she worked various factory jobs, becoming a legal resident in 1987 through a government amnesty program, per The Villager.

Meanwhile, we'll likely have a Puebla-heavy diet the next few days… 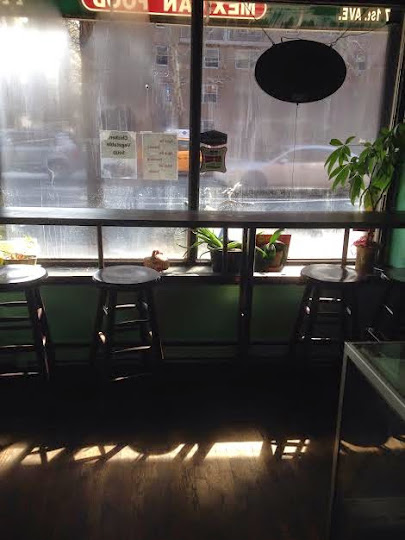 So sorry to see them close. Excellent food, generous portions and very fair prices. Just another nail in the coffin.

a great place for great food! so where to go now?

This sucks. Unfortunately, it is also indicative of the divisive, if not frustrating, ever changing dynamics of NYC. So fucking sad. This is a permanent trend. More treasured places such as this will be history in only a matter of a few years. I've already begun to resent living here more with my own rent going up over $150 a month in the spring. This individual can't manage the increase because landlords are too greedy. They want the world and want to take a bath in a tub of cash. Places like Chipotle, McDonalds, Dunkin Donuts, Chase, and Duane Reade are ubiquitous. I shutter to imagine what NYC will look like in another five years? Businesses won't be able to sustain rent payments without paying $20,000 a grand a month for even the smallest venture or venue, let alone a studio apartments which will probably go for $3,000. Another problem is jobs. Where are the jobs? Where is the work to pay the high rent and expenses? Maybe I should join the move to colonize Mars. WTF NYC?

What's worse is that it will probably sit empty for years until people can afford to rent it, just like all the other empty storefronts. It's so stupid of the landlords.

They have awesome food. What a shame. I agree with the other commenter. It will probably remain empty until a potential tenant can occupy it for 30,000 grand a month. Bullshit.

A city that once was set the example on how an immigrant family could come to the USA and succeed with determination and hard work is now showing such people (and everyone else which is not a corporation) the boot. There is no stopping this trend and all these creative hard working people will be NYC's loss and another city's gain. We are experiencing the cultural and artistic death to this city.

Too bad. It will probably be a cafe with overpriced coffee and pastries for hipsters...

Money and power is the bane of our human existence. Without it, we are no one or nothing.

People, PLEASE, PLEASE turn your bitterness into action. There are things you can do about this. Go to the new website www.savenyc.nyc. Click on Take Action. NOW. Or stop whining on EVG.

Ugh, sad news. This was a real neighborhood gem.

The rents will continue going up because people are paying the rent. All the trust funds NYU kids are coming in and paying the rent. Their parents are paying the absurd high rents. The irony is that this was no man's land in the 80's. If the apartments were empty the rents would go down, and then the stores would have to be rented at lower prices. Think about how many burrito's you have to sell to pay the rent, how many slices pizza or cups of coffee. The saddest part of this is that all the employees lose their jobs. When I was growing up here there were grocery stores. The grocer watched the kids on the block. The kids all knew that the grocery was the safe place. The small businesses know their customers by name. They ask how you feel, how is your family. The NYUer's at Starbucks don't care about who you are.

Jeremiah Moss sums it all up in today's Daily News:

The NYC we love is disappearing: It's becoming a hollow city for hollow people
BY JEREMIAH MOSS

Wherever the towers of big development rise, the rents rise with them. And as the rents hit nosebleed heights, New York vanishes. Neighborhood by neighborhood, borough by borough, this is how you kill a city.

From the glitzy corridor of the High Line in Manhattan, to the Downtown Brooklyn neighborhood around the Barclays Center to Long Island City in Queens, where Mayor de Blasio’s buddy Rob Speyer is hoisting three extravagant slabs of glass into the sky, our city is dying. It is a victim of its own so-called success.

People want to come to New York. Taylor Swift urges them in, singing, “It’s been waiting for you,” as if the city had nothing better to do but anticipate the arrival of newcomers. Bloomberg filled the whole town with tourists until we were bursting at the seams. Global oligarchs come to stash their dirty money in empty penthouses atop sky-high splinters, giving us nothing in return but long, dark shadows.
.
Apparently, New York’s been waiting for you Starbucks, Olive Garden and Applebee’s. And for you Ralph Lauren, Marc Jacobs and Michael Kors.

Small businesses in New York City have no rights. You’ve been here 50 years and provide an important service? Tough luck — your space now belongs to Dunkin’ Donuts. You own a beloved, fourth-generation, century-old business? Get out — your landlord’s putting in a combination Chuck E. Cheese and Juicy Couture.

To Anon @ 11:37. The name of this blog is EV Grieve. Grieve is a term to lament one's sorrows. You and I have chosen to be anonymous. Stop your whining.

It's kind of ironic to see this printed in the Daily News. They were the biggest supporters of Bloomberg, who was the main culprit for this turn of events, as he was selling the city to his cronies. The Daily News is a disgusting piece of sh*t!
http://www.nydailynews.com/opinion/prince-n-y-article-1.1555545

let me say what moss in the daily news is afraid to say - nycity is becoming a mall. a big, sprawling mall. w/o the parking.

That's too bad. They were cheaper and better than the one a couple blocks up First Avenue, that was review in the Times recently.

Fortunately immigrant families still do come to NYC (by the thousand) and work hard and succeed. They just don't do it in Manhattan much anymore.

If they had opened earlier in the morning, I bet they'd have mad more money. 9:30 misses the breakfast crowd.

This is one of the best Mexican places in NYC. Their mole is incredible. I live in Gramercy and go here often and order from them so much. I am in shock. SO SAD!

This blows, along with the other places that have already closed since last year, and will continue to close this year. NYC is definitely changing, as other places are. This town was supposed to be unlike any other. And, it was for long time. What a joy it was to walk the streets, to not be reminded that you were anywhere else in this country, that you were placed in an extraordinary urban mecca, that was a beautiful island all to its own. Now, as I walk, I feel I am in the suburbs or in another boring city in America, reminded of how too safe, clean, uninspiring, and expensive it is. It reminds me of Woody Allen's, Midnight in Paris. Time travel if you will to a time when Paris was sublime and rich. It is much like harkening back to a time, here in NYC, where one could be anything, do anything, be anyone, and not have to become morally or financially bankrupt. I would choose early nineties. It was still edgy, scary, and full of life. If only life operated that way, that we could go back, and relive, to make sense of it all :)

Seriously left without affordable food around here. So many flavor of the weeks but no where to get decent food at a decent price after a long hard day. Next stop tompkins square handouts.

The only way an old business can survive here if they happen to own the building as well; Baczynsky's, Moises, Veselka & Block come to mind.
Sad & the only way it might stop is if the real estate bubble explodes again... but that would be worse since it would lead to economic woes nation if not worldwide.

This sucks! Their steak burrito with the green salsa and cilantro is delicious. I am going to squeeze as many in as possible this month before their closing.

More importantly, the people here are very nice and welcoming. You will be missed. Thanks for all the great meals.

This is my favorite Mexican joint in the city.

Like the old Motor City space, this will probably remain vacant, while the greedy fucking landlord could have been collecting (reasonable) rent.

An adjective I've been writing often about the posts on this site: Devastated!

She told me that they're open until 3/23. Get that mole' while you can!

I hope this space either sits empty for a long time, or has a high turnover of occupants. Pueblo is a gem and the owner is lovely. This one is a real kick in the stomach.