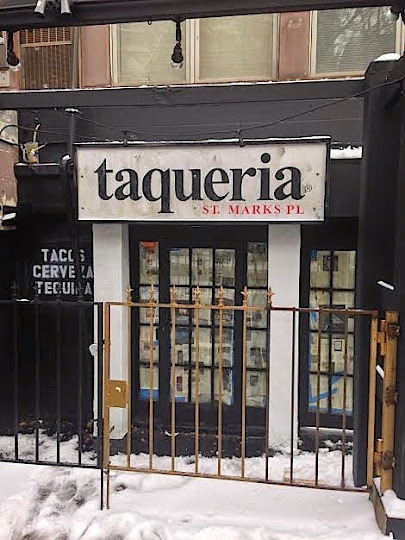 Taqueria Lower East Side had to find a new home after developer Ben Shaoul bought up the corner of Orchard and East Houston for a new luxury development. BoweryBoogie reported that the 4-year-old Taqueria closed at 198 Orchard St. after business on Sunday.

Here's more on them via Fork in the Road: "Taqueria, an offshoot of a Jersey City restaurant, amassed a stable of neighborhood regulars during its run here, thanks to its cheap fare, solid margaritas, and excellent tacos. For our money, it makes some of the best carnitas in town."

Fork in the Road said that you can expect "the same line-up of tacos, tortas, and platters plus margaritas and Mexican beer" on St. Mark's Place.

With this opening, will the neighborhood finally have enough taco/taqueria options?

After the Typhoon Lounge closed at 79 St. Mark's Place in May 2012, the space has been home to the quick succession of Saints Tavern and Kamikaze & Co.

Previously on EV Grieve:
Taqueria Lower East Side relocating to St. Mark's Place
Posted by Grieve at 4:49 AM

is this all part of an attempt to find out how many taco places can exist within a two block radius of St Mark's?

Have a taco with your dumpling!

(Don't hate on ALL the tacos, though -- Taqueria Diana on 2nd Ave is damn good. And Tacos Morelos on E. 9th is the kind of old-school place Grievers like to support.)

Just watched Broad City and lmao at the St Mark's parade of weirdness - not as weird as it used to be, sadly. Reminded me I want to try the new Taqueria location. I loved Taqueria LES. St Marks is a crowded location but i'm not sure you can have too many taco places, especially ones with very special carnitas. Going tonight.