The Cardinal has apparently closed on East 4th Street 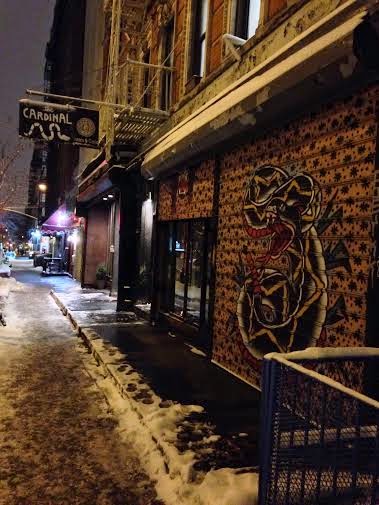 Not too many signs of life over at The Cardinal, the Southern-style restaurant from chef-owner Curtis Brown at 234 E. Fourth St. just west of Avenue B.

The restaurant hasn't been open of late. The phone is not in service. The website domain is available for sale.

Plus, last month, in a sale of assets, CB3 gave the OK to a "a full-service Spanish-influenced international restaurant" in the space. (You can read a PDF of the applicant's paperwork here.)

The restaurant, which opened in August 2011, received positive notices. (Robert Sietsema liked it when he was over at Fork in the Road.)

But it wasn't easy here. Brown, who previously worked at Bubby's in Tribeca, told The Local in September 2012 that he spent an estimated $35,000 to upgrade to a full liquor license via CB3 for the space. (Brown said that it was a handicap to not have a full-liquor license, particularly at brunch.) Then there was the increased competition, with Root & Bone, also serving Southern fare such as fried chicken, opening last June a block away on East Third Street.

All of which didn't go unnoticed at The Cardinal.

While our service may be touch and go and maybe you can say our music is a bit too funky from time to time and we could be accused of not necessarily being "kid friendly", there may times when your waiting on a drink and our waiters are outside smoking a joint, but in a straight up chicken battle we SLAY all competitors.

Email ThisBlogThis!Share to TwitterShare to FacebookShare to Pinterest
Labels: The Cardinal

"Not too many signs of life over at The Cardinal"

"Cardinal Edward Egan, who headed the Roman Catholic Archdiocese of New York from 2000 to 2009, died Thursday after suffering a heart attack at his Manhattan residence. He was 82."

Ugh. I really like Cardinal, and Curtis is a good dude.

Too bad. Theirs really WAS some of the best fried chicken I had ever had. But I could see the signs - when they first opened you got two sides with dinner, last year they knocked it down to one, then after years of calling in an order for delivery and putting it on my credit card, last time I tried I was told they no longer accepted credit on delivery orders, only cash. Sorry, folks, I'll miss you, that chicken, and those biscuits. More money for Bobwhite, I guess.

Ugh, would rather a spot like tha stuccoed than the corny, Flordia born-n-bred, formulaic "Time Out NY" reading people who infest Root & Bone.

Over the Southern thing proliferating in NYC - fried chicken and lard is ugh to many...

What??! You mean I won't get woken up by some asshole chopping wood with an ax against the concrete sidewalk at 2AM, or get smoked out by them operating an illegal meat smoker in the middle of the night (so no one will notice) when I open my apt window??
Bummer.

Nothing says douche like The Cardinal or Root and Bone. nuff said.

What a shame. Such good food. And friendly owners and wait staff. And they'd occasionally let a certain pooch in to sit downstairs when the weather outside was bad.

Best fried chicken I ever had... RIP Cardinal... Let me know where you go next Chef Brown