2nd and 2nd coming up Rosie's The transformation of the former Boukiés space on Second Avenue and East Second Street continues... with the signage for the former Greek restaurant coming down late last week... most of it anyway... 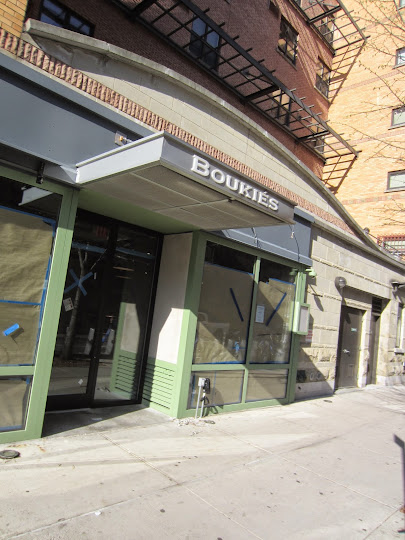 As previously noted, the folks who own Cookshop, Hundred Acres and Five Points are converting the corner space into Rosie's, a Mexican restaurant. Here's a quick preview from New York magazine:

Rosie's "plans to showcase traditional dishes, from tacos to Veracruz-style whole roasted fish. At a 12-seat comal bar, cooks will fashion masa-based snacks, or antojitos, from corn dough made in-house."

Not sure on an opening date... this is how the place is shaping up on the inside... 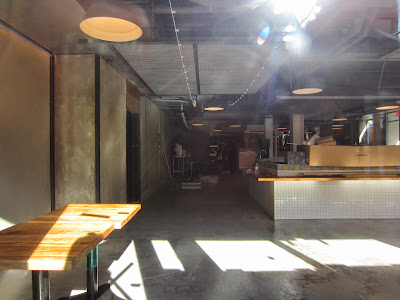 The well-liked Boukiés closed in March 2014 after a two-year run.

For sale: Everything must go at the former Boukiés space on 2nd Avenue
Posted by Grieve at 4:30 AM

Yeah, was thinking the same thing. How many taco and Mexican places can exist in the EV?

Heartbreak, the original restaurant at this location, was one of the best restaurants this neighborhood has ever seen. The food was incredible, and the design of the space was beautiful. Sadly, the community board never approved them for a liquor license and they had to settle for beer and wine, which was the nail in their coffin. They went out of business one day before Michelin gave them one of their prestigious and illusive Michellin stars.

Bookie's too was also always empty, because they too only had a beer and wine license. I am sure that contributed to their closure. I hope the community board is a little more reasonable with Rosie's, or they too will suffer the same fate. This area of 2nd Ave. is not overly saturated with bars and restaurants and there is no reason to deny them.

Should just throw in the towel and become a clothing shop.
Worst design / space for a restaurant EVER. Nobody wants to eat there. Doesn't matter how good the food is.

I live nearby and walk that way to go to the F train. I agree with the comment on April 20, 2015 at 1:37 PM. The area feels particularly grimy due to the construction and pedestrian traffic

I really like the Greek restaurant but I agree with another poster, the space is too big and therefore always looked not a full capacity. The lack of a liquor license did not keep people who like good food away it did however eliminated a highly profitable high mark up part of the bar equation.