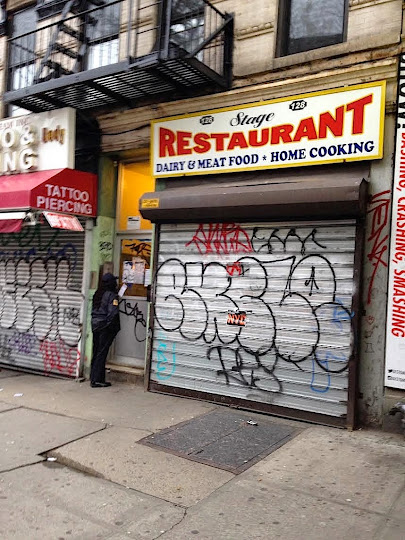 The Stage, the beloved diner at 128 Second Ave., hasn't been open since March 28, as we've been reporting. It's a complicated situation involving Con Ed and the landlord, Icon Realty.

Let's not lose one of the last neighborhood staples which has been around for this long.

If you are interested in signing the petition, you may find it here.

Previously on EV Grieve:
The possibility that the Stage won't reopen on 2nd Avenue
Posted by Grieve at 5:18 PM

Email ThisBlogThis!Share to TwitterShare to FacebookShare to Pinterest
Labels: the Stage

An example of just what the heck does NYC Small Business Division staff do? Why can't they help small business? What is Consumer Affairs doing? Julie Menin should be advocating for this business. Then you got Scott Stringer who will come out with another Monday morning financial report, but do nothing to help small businesses.

Icon and ConEd should be forced to make the repairs necessary right away. They shouldn't be allowed to simply let the building sit for weeks without gas. That is insane.

Comment #2 contains the words 'landlord , repairs, and right away,' in the same sentence. Posted should consider writing fiction novels.

If you recall, ConEd shut off Icon's building because there was unauthorized gas piping being installed in the basement. They were ordered to remove it. Then ConEd comes in and inspects before gas is restored. Icon tried to hang this on Stage, but I don't think Stage had anything to do with it.

Is it true that the person who complained is a long-time tenant who phoned in the complaint in an attempt to stick it to Icon?

"Weeks" without gas? Try FIVE MONTHS without gas, two blocks away...we haven't had gas in our building since Thanksgiving. And nothing but bullshit from our landlord and Con Ed alike.

Five months? I hope you're on rent strike.

Isn't it interesting how ths same landord has now blamed both a disgruntled tenant AND the Stage for their gas problems? As if they don't have any control over their own property?

This is what you get, people, no service, finger pointing and accusations against the retail and commercial tenants WHO ARE PAYING THE BILLS ! We are the source of all of theiir profits! Landlords act as if their wealth comes out of thin air, and like they are doing us all a favor letting us overpay them for crappy mismanagement of their lousy buldings. The money they make is coming out of our pockets, but since they are owners they think they can take your money and push you around.

Refuse to be abused. Report every violation to Con Ed, the DOB, 311, HPD, the Community Board, and your City Council member. You are paying for these basic services and for a safe buldings, demand it and force them to comply with your lease and the law.

Signed and shared the petition. Hope it'll have some impact!

@bagelguy
If the evil landlord owned twenty five percent of their business they would still be open.

Anon 11:16 If you're going to speak out of your ass, at least have the decency to post a picture of your ass in the little box.

Stage has grounds for withholding rent and for suing ICON for lost income over Icon's failure to resolve whatever issues are keeping the gas turned off.

An Order To Show Cause would be the first step. It's time for STAGE to LAWYER UP, if they haven't already done so....

Check this url to see the price of this '2 bedroom' apartment in 128 Second Avenue (Stage's building). ICON could probably fix the pipes and the firescape just from one month's rent.
PIGS!
http://www.nybits.com/apartmentlistings/5b821f5fa8246777bae4d6b3ce3ba272.html