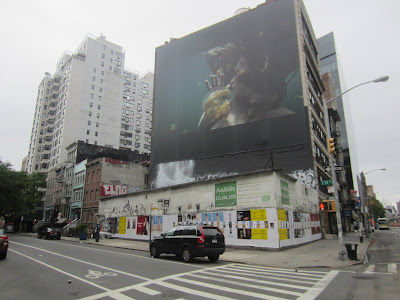 Demolition permits are now on file to take down the long-empty, single-level building at 71 Fourth Ave. and the four-story, turn-of-the-century townhouse next door at 82 E. 10th St., DNAinfo reports. 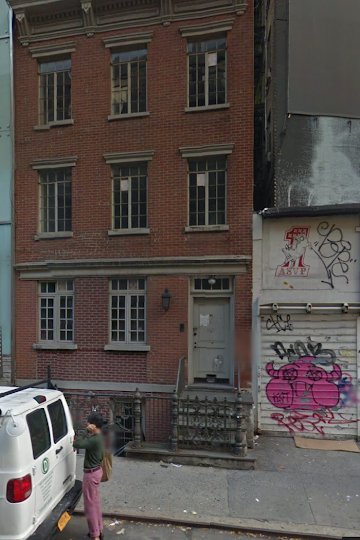 Stewart Osborne, a partner in the LLC that bought the properties for development, told DNAinfo's Lisha Arino that they are still in the "planning process," and haven't decided on what to build here.

As New York Yimby first reported back in July, the owners filed plans for a 10-story, eight-unit building on the site with ground-floor retail. The DOB disapproved the first round of plans in September.

And, as previously noted, this is one of the renderings that has been attached to the corner… 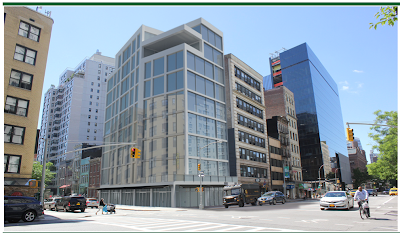 The previous tenants of No. 71, including the Green East deli and St. Marx Music (and previously the Atlas Barber School), were cleared out in early 2007.

10 stories of condos in the works for the long-vacant corner of 4th Avenue and East 10th Street
Posted by Grieve at 4:19 AM

Finally. I was starting to think that eyesore was permanent.

What a shame to lose that townhouse.

Keep the townhouse. The one-story building there now is better than the glass brutalist architecture building.

Damn it, I always liked that little townhouse. And the long nightmare continues.

Mid-town South will be getting more glass and steel. Oh wait or is this really Bowery North?

Who would demolish that townhouse? I would think that it's actually too valuable a piece of property to just demolish.

Wanker glass and steel job that gets ridiculous looking rain streaks all over it after about two seconds, puke. BRING BACK THE BRICK! (as much as the schumacher's prices make your stomache flip, it is refershing when building developers at least TRY to mimic what made NY architecture great)

TEAR EVERYTHING DOWN and re-make the city into one big slick habitrail for humans. Re-name all the streets, while you're at it. Just don't invoke anything historic, afterward.

The townhouse is probably beyond repair. Sometimes, things just have to be removed.

@1:16pm: If the townhouse is beyond repair, it was allowed to get that way by the most recent owners of that parcel of land. I remember when that was a "newly renovated townhouse" and the ask was $2 million or so!