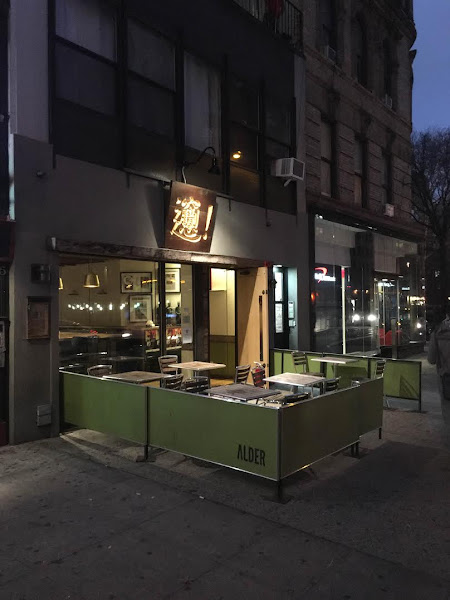 The well-regarded restaurant, — it received one star from The New York Times — has relocated from its original location in Flushing to here between East Ninth Street and East 10th Street.

A sign on the door notes cash only for now. (Not sure about alcohol — they were just on the CB3/SLA docket yesterday.) And for now they are using the sidewalk cafe guard from the previous tenant — Wylie Dufresne's bistro Alder, which closed after two-and-a-half years at the end of August.

They still have the alder name on the sidewalk blocker... not as classy

oh? I was a lot more impressed by the cheap pasta place that took over the space at 2nd & 7th without any renovation whatsoever, then the space they replaced that spent 6 months renovating and 3 months open.

@10:17 You're talking about San Marzano, which is the same owners as the previous place Picnic. They just changed the concept when it wasn't working.

The portions at San Marzano are small and they rush you. They are another factory for young people. That was my experience. The pasta with eggplant was tasty and a good price but I was still hungry. The salad was fine and they ration the bread.


@4:37pm: My experience with San Marzano has been positive. Their portion size is quite reasonable for the price, and if I want bread I ask for some. It's one of the few places where one can get a good dinner (share a salad, 2 pasta entrees, one glass of wine) for under $40. And I have never felt particularly rushed by them.

Meanwhile, Biang would do better to spell out their name in English on their sign. The sign they currently have seems pretentious to me.

I agree with 4;37 comment. It's not a full pasta portion. You really need to get a pasta apateizer and salad. That's the catch.The bread they give you this little piece. It seemed very cotrolled like the staff had to hit every point correctly. I felt very exposed and the staff was exposed like we're all part of the machine. I don't like that. It's all too common in this day and age. You're paying the rent.

@4:37 the sign is in chinese, its a chinese restaurant, and that's pretentious?

what about all the 'merican restuarants with their english language all over the place?