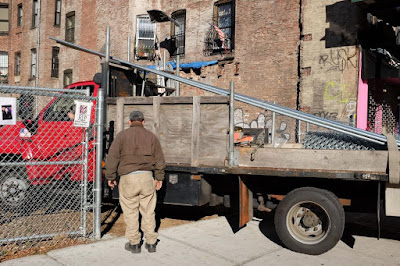 If you walked past the Second Avenue explosion site this past week, then you likely noticed the arrival of a new fence on the property at East Seventh Street... 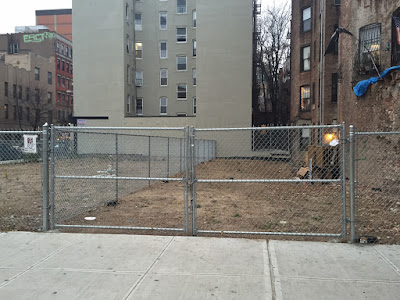 Workers put up the fence last Wednesday — after the arrival on Dec. 14 of the sidewalk bridge out front of the fire-damaged 125 Second Ave. 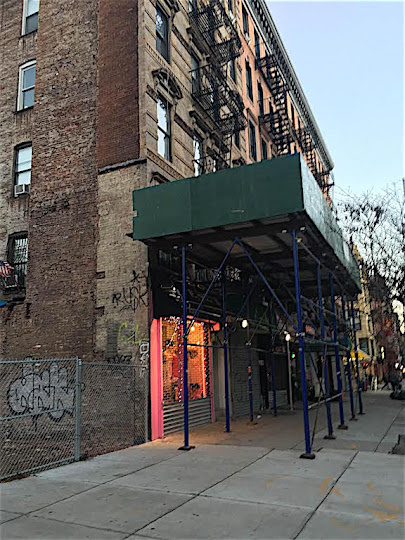 Here's what's happening at No. 125 according to the approved DOB permits on file with the city (in their ALL-CAP STYLE):

There's also an approved permit for the following at the address:

FILE FOR GAS REPIPE OF ENTIRE BUILDING FOR COOKING USE ONLY PER PLANS.

Authorities have said that an illegally tapped gas line at 121 Second Ave. may have caused the blast that killed two men and injured a few dozen other people... as well as destroyed three buildings — 119, 121 and 123 Second Ave.

To date, the city has yet to file charges against anyone in connection with the explosion. The Post reported in April that investigators have "six prime suspects" — landlord Maria Hrynenko, her son Michael Jr., contractor Dilber Kukic as well as an unidentified subcontractor and two workers.
Posted by Grieve at 4:16 AM

Parging is a schmear of cement applied to hide defects. When done, that wall will look nice, but it will still be as structurally unsound as it is today.

What's taking so long to file charges? Are the suspects connected?

I find it very interesting that they have partitioned the lot with fencing in the manner that they have. I can't see any reason for them accesing the lot in that way, except out of respect for the memorial.
There could be another reason, I guess, but color me surprised.

> There could be another reason,

which may be that that is the physical property line, and you don't want to be trespassing onto your neighbor's lot. That empty field is really several properties.

Yes, I considered that. But doesn't seem like that would be where any actual property line would be. And almost certainly not a property line for the building that they are working on. Could be wrong.

10:15 AM
Confusing parging with stuccoing.
Similar, but different purpose. Parging is done for waterproofing purposes.

Plus, they're going to do a lot more to that wall than just waterproof it. (i.e. structural work)