The Force is strong, etc., etc., with this Dark Side poster campaign 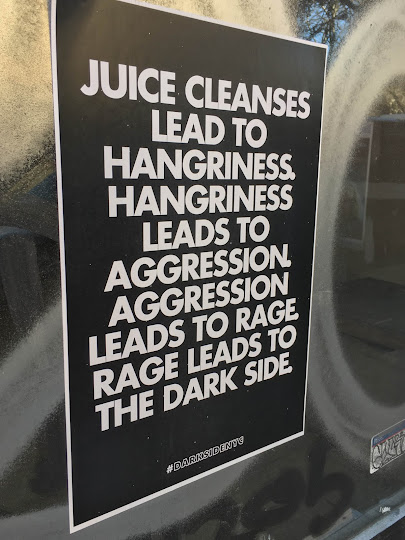 By now, you've likely seen these Dark Side posters plastered just about everywhere around the neighborhood (and elsewhere). As far as we can tell, they arrived Tuesday night/Wednesday morning. (About the the time that @DarkSide_NYC started following us — and vice versa.)

Here are some other samplings of the Dark Side...

Nicole Levy at DNAinfo checked in with a story on the Dark Side... an excerpt:

A campaign calling itself Dark Side NYC — launching just as "Star Wars: The Force Awakens" opens in local theaters — is taking aim at expensive coffee, crowded subway stations, juice cleanses, drunken brunches, online dating and other stressors of New York City life with posters such as the one above and social media accounts featuring a Death Star avatar.

"We seek to bring balance to New York," said the enigmatic figures behind the campaign in an email to DNAinfo. "And with the Force fresh on everyone's minds, we feel it prudent to reveal how New York City truly is the Empire State," they added, referring to the oppressive Galactic Empire of George Lucas' cinematic sci-fi saga.

As any true Star Wars fan knows, the posters take their inspiration from the wisdom of Jedi master Yoda: "Fear is the path to the Dark Side. Fear leads to anger, anger leads to hate, hate leads to suffering," he tells Luke Skywalker in "Star Wars: The Empire Strikes Back," admonishing him to steer clear of the path taken by his father, the evil Darth Vader.

Oh. Well, so much for our theory that this campaign was a tribute to John Cafferty and the Beaver Brown Band's hit song "On the Dark Side" from "Eddie & the Cruisers."

Email ThisBlogThis!Share to TwitterShare to FacebookShare to Pinterest
Labels: signs around the East Village, the Dark Side

I hate myself for clicking on that video. I have succumbed.

Star Wars is lame to me, but I love the sentiments. They need to put the mimosa one outside Mama's and Poco. Cocksuckers.

Sex and the City leads to Carrie Bradshaw wannabes. The wannabes lead to arrogance and clulessness. Clulessness and arrogance lead to gentrification. Gentrication leads to the dark side. Like, yah!

I want someone to make Eddie & The Cruisers III.

II was good. Great songs in its own right.