So 397-401 E. Eighth St. at Avenue D, where a nine-story building with 33 units, has been in the works for a long time, is starting to really look like a residential building... 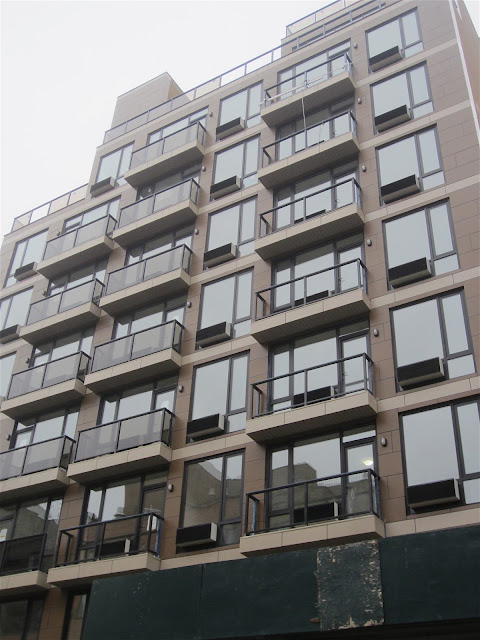 We still haven't seen any information on what we're told is a rental building.

Before the start of the construction during the summer of 2014, the site sat stalled for years. There were plans for a six-story building on the property in 2006, but those plans never materialized. 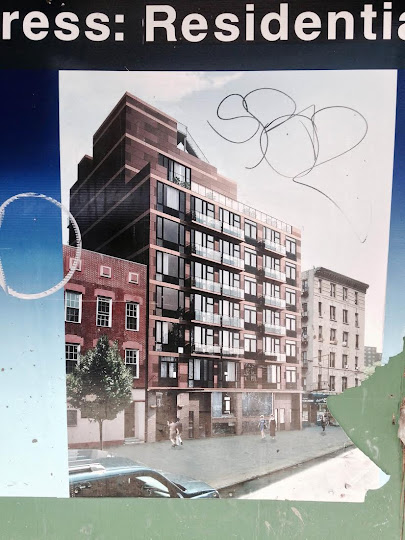 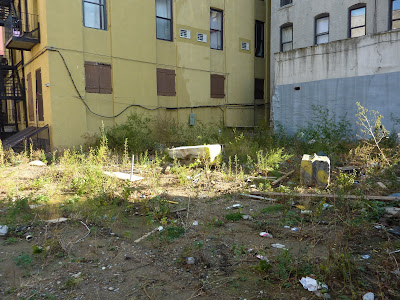 Wow mini balconies plus living in the "heart of the East Village" what else could you ask for?

A 99 cent store in the ground floor!

I've resided in the EV since 2010. I live on 7th near C. I've witnessed a resurgence of vitality, especially with restaurants, bars, galleries, and shops. I believe it is for the better. I feel safer and frequent many of the aforementioned establishments. During the five years since my arrival to the EV from Brooklyn, buildings have virtually blossomed. This is a good thing. What might not be considered a good thing is the rising costs of housing. My rent has skyrocketed, yet I still refer to this place as home because it still feels like NYC. It embodies everything wonderful about diversity and distinction. I'd rather struggle to pay my rent and live in a neighborhood I believe in. Toward the future, I envision Alphabet City will resemble what Greenpoint or Williamsburg was in the early 2000's. I hope for the sake of other fellow residents, that not too much is negated from the charm and mystique of our magical, somewhat untouched part of Manhattan. The wonderful aspect of this new addition (the building) is that we as a city have to grow and redefine ourselves and our surroundings. Otherwise, we become stagnant and can't appreciate what is new and exciting. Happy New Year, EV Grieve; this is one of my favorite sites. :)

Since you have lived here since 2010 and you believe you have seen many changes to the neighborhood in that time (which in some way is accurate) you actually have seen very little of the old neighborhood, the way it was for decade before the developers turn gentrification into hyper drive. I've live here since 81 and I agree many changes were welcome such as the reduction in crime and gentrification was slow and did not involve big developers as it does today. The two biggest changes for the worst have been the explosion of nigh life and sell off of generations old buildings to developers. The city and state government decided to make the EV and the LES in general into a nightlife strip which has greatly degraded the quality of life for individuals and families with long and short ties here.

The tax breaks in return for (broken) promises to build "affordable" housing by developers had literally wiped out our history and culture in the past 10 years and there is no end in sight. Landmark designation is meaningless today and public land (owned by we the tax payers) is virtually handed over to developers for luxury housing. The NYU creep into the EV has made us the ideal place to live if you are a student at that school. These students for the most part come from wealthy families so rents are subsidies by parents, landlords understand this so getting rid of longtime residents with buy outs or illegal means is happening on every block. Our neighborhood which has welcomed everyone in the past and was a great example of NYC diversity is now becoming a monoculture of caucasian upper middle class 20 somethings (a college campus in the mid-west). The EV is now a tourist destination which means services and businesses are geared to transient customers and not those of us which actually live here.

You will sooner of later be offered a buyout or your free market apartment will be unaffordable by you sooner of later or you might realize one day that the EV you knew from 2010 is completely gone and what has replaced it is not for you.

Balconies should be required on every new building, no matter what the income level.

"Balconies should be required on every new building, no matter what the income level."

The balconies on the new building next to me have made sleeping impossible many nights during a week. People come home from the bars hang out on these balconies at all hours of wee hours and talk, yell etc... Like they are still at a bar. Irs hell.