As we first reported back in June, Christopher Pugliese, the owner of Tompkins Square Bagels on Avenue A, is opening a second East Village location.

However, in recent months, we hadn't seen much, if any, activity at the former Open Pantry space at 184 Second Ave. between East 11th Street and East 12th Street — the soon-to-be home of his second shop. (His other store remains at 165 Avenue A.)

Then this sign arrived at the Second Avenue storefront on Wednesday... 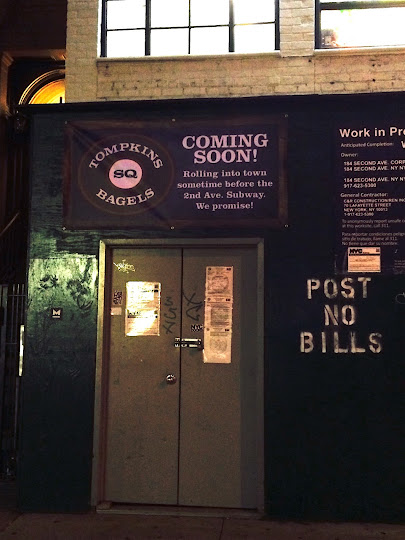 We asked Pugliese for an update on the renovation.

Turns out that the Department of Buildings (DOB) has been behind the delays, he said.

"The killer is, the DOB approved all of our major alterations very quickly," he said. "They came back to us with a list of about 12 minor objections and asked us to make adjustments. Little things like 'move this staircase six inches to the right,' or 'put the skylight here instead of there.' That has been dragging on for months."

He had hoped to be open for business by now.

"The whole thing is very frustrating. I signed my lease in June. I don't have money to spare on rent for an empty space. My landlord was nice enough to give me two more free months when I came to him and told him what was going on. That's unheard of in this town," Pugliese said. "We are hoping to get final approval this month, work for three to four months on the build out and open in time for spring.

"But I will beat the Second Avenue subway — that's for sure."

Tompkins Square Bagels makes it official on 2nd Avenue
Posted by Grieve at 4:20 AM

Bunch of incompetent Big Government commies at the DOB, an entity of Havana on the Hudson. The owner of the new laundromat on Ave. B between 6th and 7th told me the DOB entity lost his paperwork, which is why it was empty for six months before they started doing business recently. Mcbureaucrooks all. Between the crookeaucracy, stupid regulations and high taxes, it's a wonder any businesses exist in Havana on the Hudson. Fidel is cheering on the crookeaucrats.

DOB regulations only apply to individuals and small businesses. This is yet another example of that.

More like Kremlin on the East River, because an oligarchy isn't communist nor socialist.

The Polar Express will arrive before the Second Avenue subway does.

I saw the Polar Express yesterday, at the train station.

And the fucking juice vitality will probably open up faster...

Chris's grandkids will arrive before the 2nd Avenue subway.

Too bad that the former Open Pantry space has been tied up for so long... hope they can get off the ground soon.