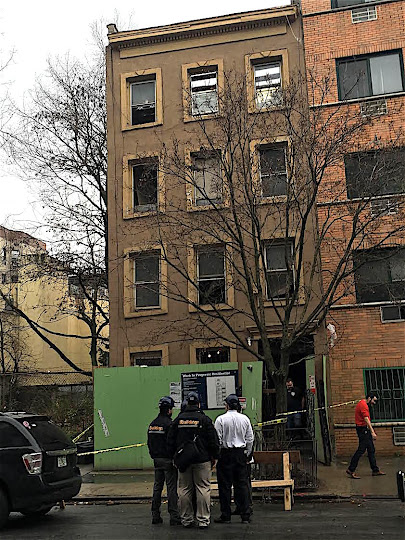 Several EVG readers have passed along word of a partial collapse at the under-renovation townhouse at 356 E. Eighth St. There is an unconfirmed report that one of the workers at the site was killed in the collapse that occurred earlier today, according to the super of a building on the block between Avenue C and Avenue D.

As of 2 p.m., a reader reported that the site is cordoned off... with building and police officials on hand.

There isn't any other information available at the moment. We'll update as necessary.

As previously reported, the vacant townhouse had been on and off the market in recent years (here and here). The most recent listing pitched the space for "high-end apartments or a luxury home."

Recently approved work permits show that the existing 4-level structure will receive two new floors and a mezzanine. Here's the all-cap DOB recap of the permit: 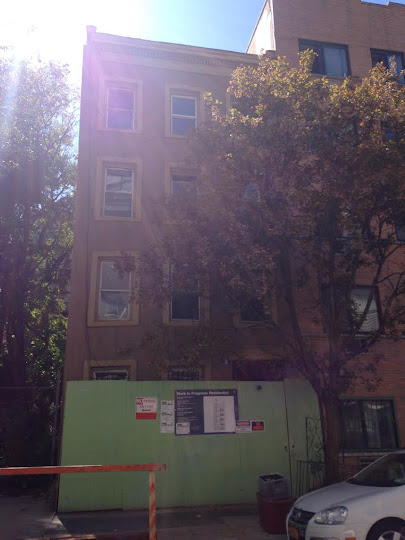 The owner is an LLC with a Kew Gardens address, according to DOB paperwork. 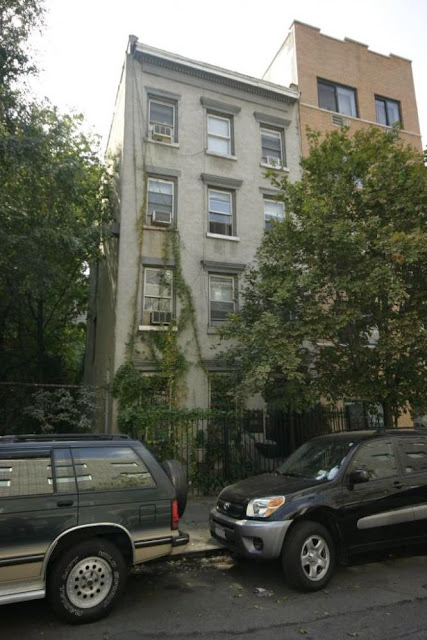 The city has issued a Full Vacate on the address... "due to stability concerns," according to the DOB website... 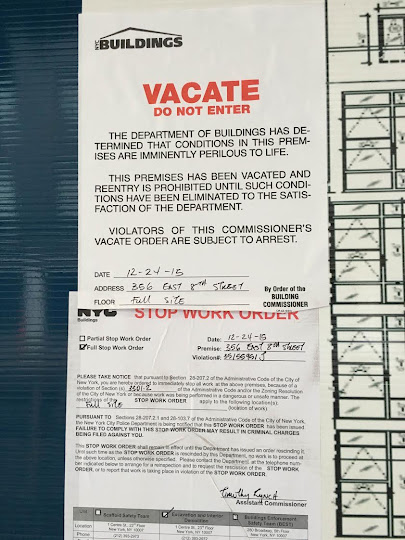 The Firemen's Garden next to the property has also been hit with a Full Vacate... 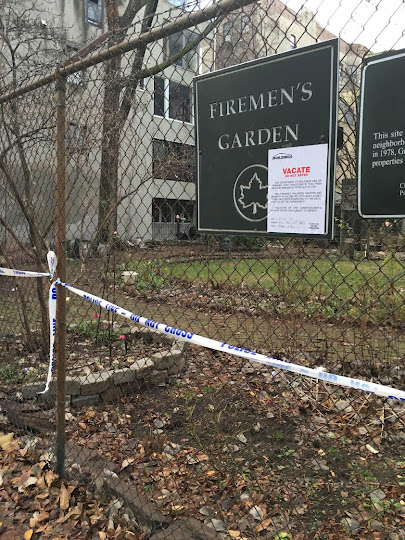 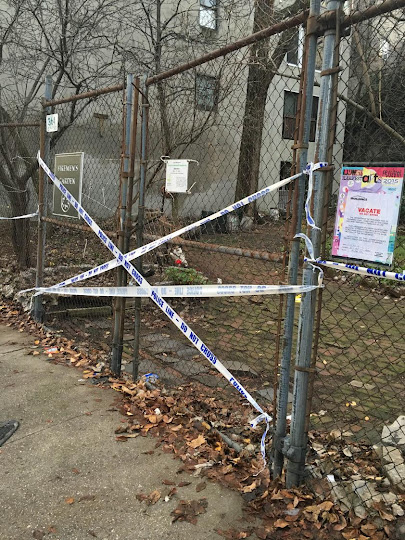 As for the report from a neighboring super about a worker fatality... we have not heard anything further about this. There is a candle at the scene now. Someone wrote "May the Lord be with you now and forever." 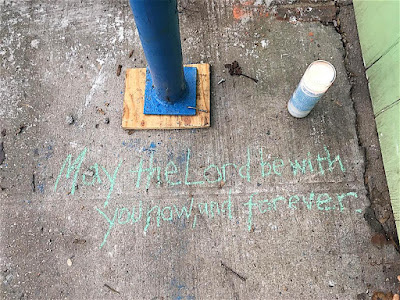 According to the DOB website, the FDNY ordered the inspection after a worker fell from the third to first floor.

There is a new chalk message outside the site ... along with more candles... 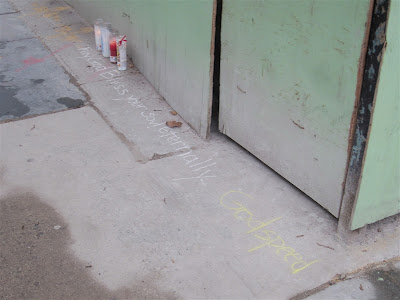 A reliable source says that the construction worker who died was a 33-year-old man from El Salvador, a married father of five. The accident happened around 11 a.m., and the man died later that afternoon at a hospital. According to the source, workers were demolishing the existing rear wall when a large chunk of masonry broke off and somehow landed on the scaffolding the was on and he fell.
Posted by Grieve at 2:40 PM

Goodbye, old house; maybe when you're gone, the developer can build into the Firemen's Memorial Garden.

Most of these buildings should have been demolished ages ago as the buildings were not built with the best of materials and highest of standards (remember they were built for poor immigrants.) And they were built in an area which was previously swamp. It is indeed sad if anyone died or was injured but expect more stories like these. These buildings are old fragile and without support from side buildings potentially dangerous.

of course all the debt holders trying to sell this half developed property have always done their utmost to maintain the upkeep of the holding, the building really collapsed due to poor people 150 years ago.

Thanks for the update, interesting the lack of media coverage on this, as the report of a death seems likely based on the candle & chalk writing at the scene. Guess a construction worker dying on the eve of a major holiday doesn't attract attention.

I think it's safe to say nobody died.

This is one of the oldest (if not THE oldest) buildings on that block -- I wonder if it is land-marked. Seems awfully convenient for a partial collapse to occur, giving the specualtor owners an opportunity to demolish and create more ugly "luxury" housing....

The building had been vacated since Sandy being deemed unsafe. I think it's fair to say the reason the building was not taken down and replace was preserving the city property tax rate as was the case on the building hosting the Sun Burnt Cow that temple to twenty something Twinkies drinking all weekend. The building was also under going a expansion of its floor space as well. Having gone by here several times a day the root cause was probably the quality of the construction crew this appeared as a fly by night on the cheap operation. The Sun Burnt Cow even tilting like an Italian monument had no such issues.Ano 9:31 has many a valid point and the building on 7th was recently demolished to make way for something new, with property there are options a owner can choose. Being old is not a reason to restrict property rights by "land marking", new construction is healthy sign in the city and it's beauty is in the eyes of the beholder but its contemporary building to code is for every one. This side of the street is 2/3rds absorbed by two community gardens. The Fireman Garden an eye sore until recently maintained by others could be developed as moderate and Senior citizen housing with a bronze plaque on the building for the dead fireman of 1978. A few units set aside for retired fireman.

@9:31pm: I don't know about this particular building, but I live next to a building put up in 1853 as a beautiful single family home. It is now an SRO. Many of these buildings didn't necessarily start out built for "poor people."

The man who died was Alberto Pomboza from Ecuador.
I can't find a mention of accident anywhere.