The CBGB restaurant is open at the Newark airport, though you won't be able to order the Marquee Moons Over My Hammy

The CBGB restaurant is now open at the Newark airport, as you can see.

Now what to eat there?

Imagine the possibilities via the folks at Lucky Peach, who have created a parody menu... 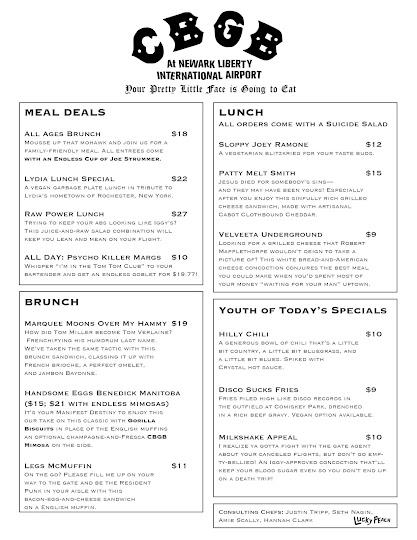 "All orders come with a Suicide salad." (We can dream!) Heh. 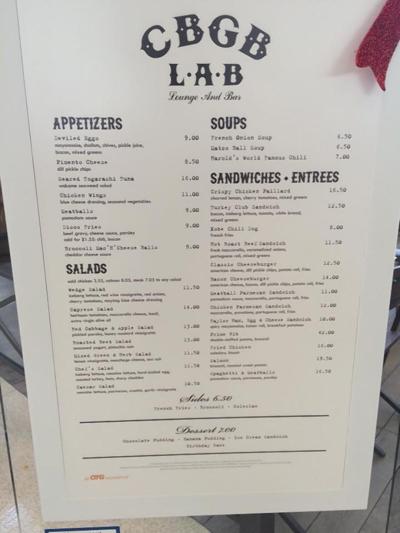 In response to headlines such as 'Birthplace of punk' CBGB to be reborn as airport theme restaurant, throwing human progress into doubt (Mashable) ... the Post has countered with Stop whining – Newark Airport is where CBGB belongs.

Even if the grand opening of CBGB in Newark were to feature a reunited Talking Heads playing, Richard Lloyd and Tom Verlaine working as busboys, while Debbie Harry waits tables and serves up Kristal’s original recipe chili, it still wouldn’t change the fact that CBGB is basically a brand that represents New York City to people who don’t live in New York City. That’s the way it’s been for years, and that’s why the idea of it being reborn as a restaurant in Newark fits perfectly.

Previously
Posted by Grieve at 9:21 AM

Unlike some of the great concert halls we have lost in our city CBGB's would not have survived as a music venue since the people (musicians and patrons) longer seem to exists in this city. There appears to be absolutely no hint of rebellion in today's young people who don't really care about culture unless you consider texting, taking selfies, drinking juice and walking around with a Starbucks cup "culture". I'm sure somewhere else in this country there are several CBGB's (not by name) springing up and kids with a lot less money than those walking around the LES today have, are getting bands together and creating some great music. Art and music is dead in New York, today we are only about drinking and shopping apparently.

I'd eat a meal off that fake menu in a heartbeat.

1. Punk was not the enemy of Disco. Peter Frampton and Ted Nugent were.
2. If you're going to offer disco fries, you probably shouldn't say they suck.
3. There's no such thing as a suicide salad, unless CBGB Newark Airport is going to sell a surely superpopular kale-and-needles Caesar.

The Lucky Peach menu would have been a much better way to go. The real menu is just lazy and generic. They appropriated the name of the venue, the awning, and nothing else; they didn't have the balls to do anything really vulgar or tasteless or tell us nostalgic old geezers to fuck off. It's too timid and pathetic to even hate.

This is hilarious. The NY Post's Hardeep Phull, an Indian by way of London, complaining about how CBGBs was for tourists like himself. And he's right. While CBGB owner Hilly Krystal was born in NY, he grew up in New Jersey and Philly, so by the time he came back he was a transplant too. Let's not forget how very amused/annoyed many East Villagers were to see all these punk rock kids who came in from the Island and Jersey every weekend -- hello Bridge and Tunnel crowd -- to camp out on St Mark's Place, bum cigarettes, buy all their tough-looking studded leather outfits, and paid to see performers at CBGBs like Debbie Harry, who was also from...wait for it... New Jersey.

Wow, they spared no expense in keeping it faithful to the original.

Still, for a real gritty NY experience I prefer the new Mars Bar in the Short Hills Mall. It's on the 3rd floor next to the Cheesecake Factory.

I realize it's an overly simplified argument and there were other factors in the mix (such as Hilly's alleged debts at the time of his death and Mayor Bloomberg's illiteracy with regard to real NYC culture, not to mention skyrocketing real estate prices on the Bowery) but with a little more foresight CBGB might have been made into the NYC version of New Orleans' Preservation Hall -- a way to support local musicians in a neighborhood long known for producing the best in American music, and a tourism goldmine potentially for decades.

Someone should take over The Pyramid Club, rename it CBs, and book shows - I'm not kidding.

Bowery Electric and Otto's Shrunken Head are the only East Village live music venues with stages and dancefloors besides Pyramid but neither is as good or big as Pyramid, and OSH barely has live music anymore or if it does what? When was the last time an event there was mentioned on EV Grieve (where else?)

John: "Still, for a real gritty NY experience I prefer the new Mars Bar in the Short Hills Mall."

So, just down the road from DiRoberti's?

The "Goddammit, someone stole my fucking guitar" Weekly Special

4:03pm - Yeah, right, all those venues you listed are on the Lower East Side, not in the East Village. Different neighborhoods.