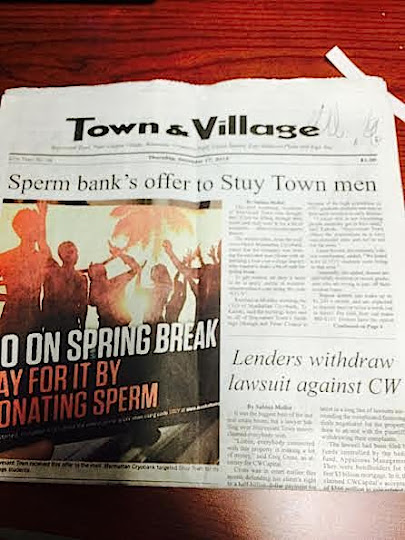 An EVG reader shared this story with us from the past week that we missed...

As Town & Village first reported, Midtown-based Manhattan Cryobank sent a mailer to to all of Stuyvesant Town’s buildings (though not Peter Cooper’s) "because of the high population of NYU graduate students and men in their early twenties to early thirties."

As you might expect, the mailer didn't go over real well with some folks.

“This is the kind of PR that Tishman and CWCapital have been putting out that people are sending us that. We’ve never received this kind of thing — this is what they think this neighborhood is? What if you sent your kid down to get the mail? We do not want to be known as the sperm bank neighborhood. I think the new people (Blackstone) should know about this. They bought a sperm bank.” 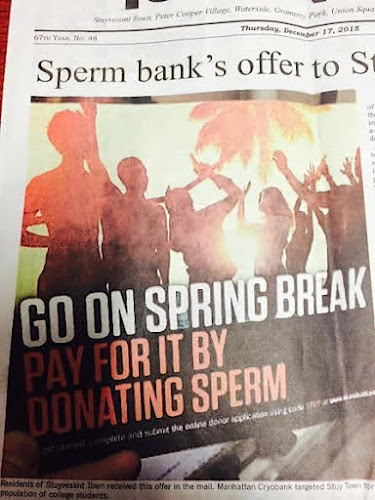 Any lunkhead with a high school diploma and parents with $60k a year to burn can get into NYU. Not exactly elite DNA samples there.

Donating sperm should be non-compensated, like donating blood. (That's kind of what "donate" means, y'know?)

There can be premiums for it, like a polarfleece hoodie, and you can even accumulate points toward prizes you really want, but seriously, folks: egg donors have a lot more work—assuming they'll be carrying the child to term—and are uncompensated beyond basic medical care during the pregnancy. What's wrong with this picture?

DNAinfo NY had the story as well.

I think this quote says it all:

"“I’ve always thought about doing it,” said Ashkay Misra, 19, who is in his first year of living in Stuy Town."

I wanna make a deposit in the sperm bank as long as the account will not be frozen, the interest is come-pounding, and when it has matured or the market has softened, I wanna be able to pull-out and withdraw.

Imagine if all the sperm donated was from bros? I am scared to think it. The world doesn't need more sperm from them. We are over populated as it is. At least the ad was honest. Too bad though. I am 38. Evidently, my little guys are too old. :(

Appropriate this should be reported on a site called DNAinfo.

Imagine if all the sperm donated was from bros? I am scared to think it. The world doesn't need more sperm from them. We are over populated as it is. At least the ad was honest. Too bad though. I am 38. Evidently, my little guys are too old. :(

You're never too old to father a child; look at Tony Randall—a father at 75. I think these sperm bank people should relax their standards; the world isn't overpopulated enough.

"What if you sent your kid down to get the mail?"

Uh, you tell them that some people need a little help having a baby and that the stork is busy? Or maybe if you are unable to communicate with your child you shouldn't have born a person in the first place.

Ladies and gentlemen, the #1 (stated) reason against gay marriage over the last 2 decades. How will I ever explain to my kids this very straight forward thing that doesn't negatively effect them at all?

If your sperm donator child starts yelling "woo" all the time in 2036 you can trace his daddy to Sty Town circa 2016.

You could do better, smarter, more athletic and more emotionally balanced than the pool of potential donors at NYU.

Earlier this year when I was broke and unemployed from a lay off, I contemplated donating. I contacted the sperm bank here in the city and to much of my surprise, I was informed that at 39, soon to be 40 in a month, I was too old. They said much of the sperm at this age begins to diminish and loses its potency, often causing birth defects and others problems. I'd say if you're a younger dude, and have no issues enabling your potential off spring, do it. But the weird thing is my dad became a dad for the first time at 42. I turned out pretty good. Age is just a number.

At least all that bro-sperm gives a petite neurotic intellectual lass like me a chance of creating a 6'2" hulk unplagued by too much thinking. Muscle-bound AND entitled. Yesss!

Can I make a deposit in one of the Automatic Sperm Machines in the lobby?

I just saw a help wanted ad for tellers at the Stuy Town Sperm Bank. No kidding!