[Updated] Crime drama to play out on East Village streets 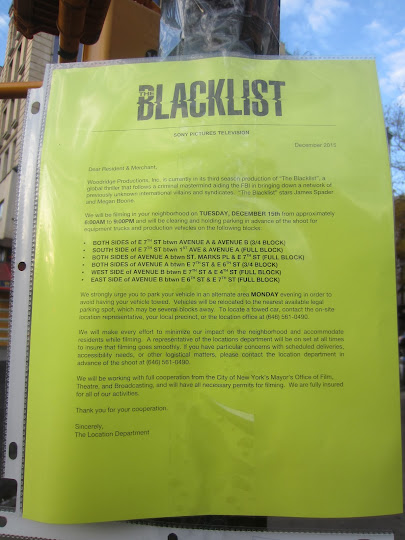 Film and TV shoots around have become so commonplace that they aren't even worth noting. For the most part.

Having said [written] that, however... "The Blacklist," an FBI crime drama on NBC starring James Spader, will be camped out all day on parts of East Seventh Street and Avenue A, among other places.

The last time that we recall crews for "The Blacklist" filming around here, they had a scene with FBI agents in tactical gear and black SUVs in Tompkins Square Park. Which provided for a few confusing moments for anyone not paying attention... 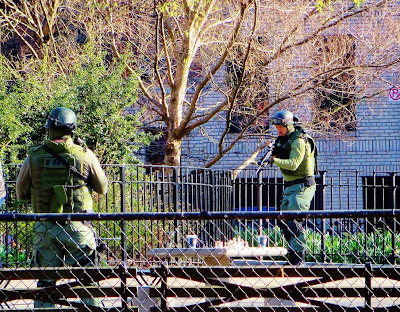 [Photo from April 2014 by Bobby Williams]

Apparently this scene doesn't call for Joe Strummer in the background... the crew temporarily covered the mural outside Niagara on East Seventh Street... 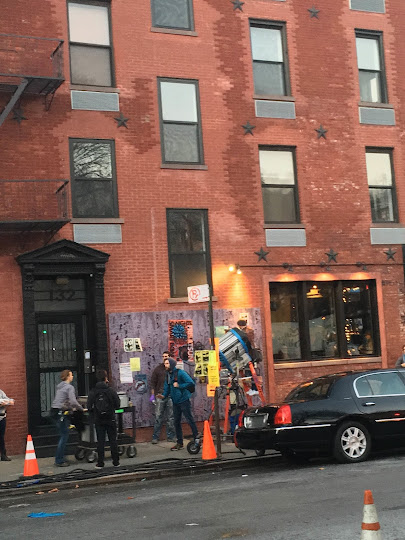 Workers uncovered the mural after the filming... someone said that they couldn't have it in the shoot because it is copyrighted art???? 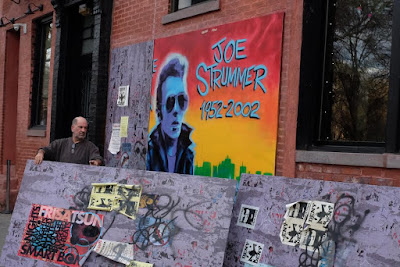 Seriously, James Spader is the last person the FBI would want investigating any crimes.

Just walked by...I like how they brought in a hot dog cart like "Hmmm this park doesn't seem New York enough....I know!"

The film crew couldn't decide if Joe Strummer should stay or go. Those agents are holding the guns of Brixton. James Spader's character fought the law and won. They came in here for that special offer
and a guaranteed personality but now they are lost in the supermarket. And, the film crew is all alone and keep the wolves at bay.

Spader didn't want Strummer upstaging him. Also, he kept asking Strummer to go get him a coffee from the kraft service table and when Strummer didn't respond he kept punching the mural over and over screaming,"DO YOU KNOW WHO I AM??"

The film crew couldn't decide if Joe Strummer should stay or go.

LOLOLOL (Neither could he!)

Yeah Grieve it's likely a legal thing, since it would be prominently displayed the artist could claim they are using his work in the show, etc. It could also be a visual issue, since it has big letters and bright colors, it would be distracting. Or maybe it wasn't gritty looking enough for the aesthetic they wanted.
The legal aspect is definitely there though.