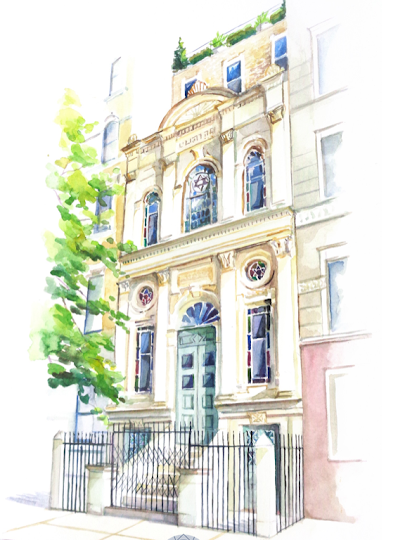 The Times recaps what has transpired to date (with some new details) about the former Congregation Mezritch Synagogue at 415 E. Sixth St. between Avenue A and First Avenue.

As you probably know, the historic building is being converted from a house of assembly to three houses of condos, with prices ranging from $2.95 million to $4.4 million (that unit includes two terraces).

A few passages from the Times then:

The congregation that has occupied the building since 1910 will still be there, on the ground floor and the basement level. In fact, the condominium deal has allowed the synagogue and its building to survive.

Two of the apartments include the synagogue’s original, newly restored stained-glass windows, and one also has an original door, now with glass cutouts to let in light, as part of a living room wall.

The developers received permission to bump up part of the roof a little to create the second level of the penthouse, though the change is not visible from the sidewalk.


It may not be visible from the sidewalk directly in front of the building, but the addition is noticeable from across Sixth Street and in Village View. It's also in plain view in the rendering on the 415 website.

History reimagined with $4.4 million penthouse at former 6th Street synagogue
Posted by Grieve at 4:10 AM

So what is that, hush money? Payoffs?

You expected a parking space with the 4 mill?

I expect a view that does not include religious symbols in colored glass which will have to go if anyone is seriously considering these apartments.